Jamie Coleman, Professor of Clinical Pharmacology in Birmingham, has proposed replacing the term “painkiller” with “pain reliever”, in the hope of reducing people’s expectations of the therapeutic effects of opioid analgesics and heading off what might become a UK opioid crisis similar to that currently being experienced in the USA. Perhaps he had in mind the Sapir–Whorf or Whorfian hypothesis, better called the hypothesis of linguistic relativity.

The hypothesis has two main forms, strong and weak. Both propose that language and thought are closely related—the strong, original, version that language determines thought and the weak version, sometimes called neo-Whorfianism, that it influences it. By influencing how we think about the world, so the hypothesis implies, language influences behaviour.

The Oxford English Dictionary (OED) defines the hypothesis as follows: “A hypothesis, first advanced by Sapir in 1929 and subsequently developed by Whorf, that the structure of a language partly determines a native speaker’s categorization of experience.” As Edward Sapir originally wrote, in a paper titled “The status of linguistics as a science” (Language 1929; 5: 207-14): “The fact of the matter is that the ‘real world’ is to a large extent unconsciously built up on the language habits of the group. No two languages are sufficiently similar to be considered as representing the same social reality. The world in which different societies live are distinct worlds, not merely the same world with different labels attached.”

Both Sapir and his pupil Benjamin Lee Whorf (Figure 1) derived their ideas from studying Native American languages, Algonkian and Athabaskan, Nootka and Apache, but they did not publish the hypothesis in a joint paper. It was Harry Hoijer, another pupil of Sapir, who, in 1954, united their names posthumously in a chapter in Language in Culture, “The central idea of the Sapir–Whorf hypothesis is that language functions, not simply as a device for reporting experience, but also, and more significantly, as a way of defining experience for its speakers.” 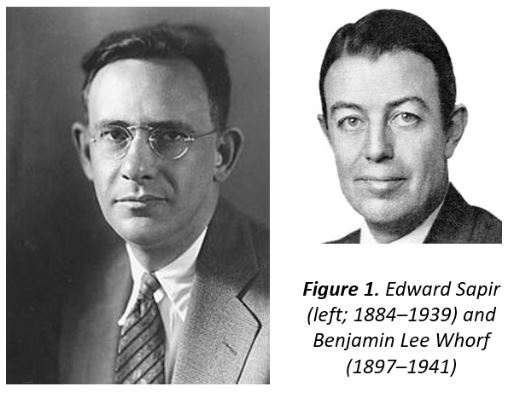 The hypothesis implies that if there is no word to describe a concept, it will not be understood. However, there are many concepts that English speakers understand perfectly, but for which there is no English word. We often have to borrow a loan word or loan phrase from another language to describe such concepts: schadenfreude from German, déjà vu from French, bel canto from Italian. And we name some diseases from other languages, such as Japanese. Furthermore, comparisons of English-speaking countries show that cultural expectations differ from country to country, even when the main spoken language is the same.

In the 1960s the Sapir–Whorf hypothesis fell out of favour, after Noam Chomsky proposed that language is instinctive and innate. Just as our body structure is determined genetically, so are our cognitive processes. And, as Stephen Pinker points out in The Language Instinct (Figure 2), what little evidence there is for the hypothesis is weak and open to criticism. 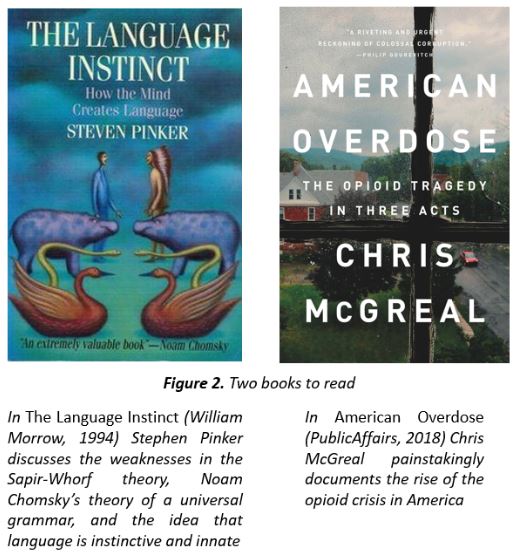 What about the analgesic words themselves? Table 1 lists the definitions, which do not convincingly show that there is any real difference between “painkiller” and “pain reliever”. Nor have I seen any evidence that people’s attitudes to the expected effects of analgesics are likely to be influenced by the words used to describe them. Most will, I believe, expect complete relief of acute pain from an analgesic, but no permanent cure if their pain is chronic.

Table 1. Some definitions (based on those in the OED) 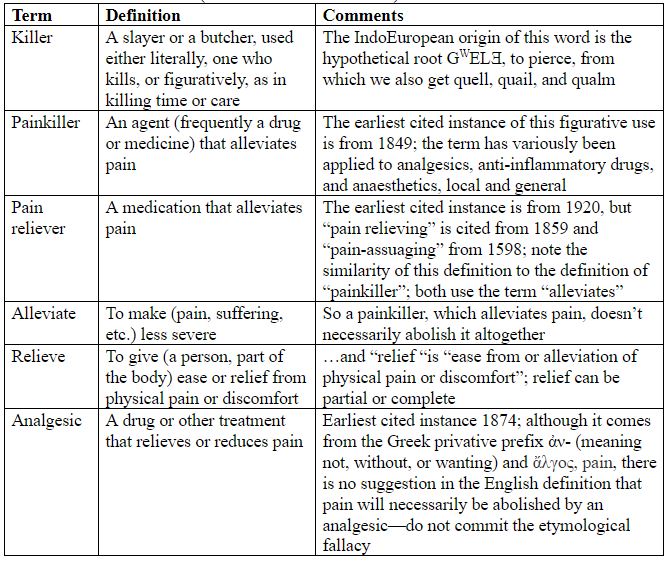 The term “reliever” has been used to describe β2-adrenoceptor agonists (e.g. salbutamol) in treating acute attacks of asthma. A reliever is expected to reverse the acute bronchospasm completely but not to prevent later attacks; that is what the preventer, an inhaled glucocorticoid, is expected to do. But pain is different—we use the same type of medicine to treat both acute and chronic pain. In any case, the history of the opioid crisis in America does not suggest that terminology is at fault. There the problem has been compounded by false expectations about the risks of opioid dependence, the widespread availability of potent opioids, particularly modified-release oxycodone, and reckless prescribing (Figure 2).

Neither modern linguistics theory, pace a few neo-Whorfians, nor the dictionary definitions of the relevant words, nor the history of the American crisis suggests that a change in terminology will have any beneficial effect on the use of analgesics. It is, however, good to highlight the problem by talking about terminology, because it is likely to be educative.