Consonantal shift from BHĀ gave the Greek word ϕαίνειν, to show or cause to appear, which gives us words such as phantasmagoria, phantom, phase, and phenomenon. Adding prefixes gives angelophany, bethphany (the miracle in the house at Cana; Hebrew beth = a house), Christophany, epiphany, hierophany, phagiphany (the feeding of the 5000), pneumatophany (appearance of the Holy Spirit), and satanophany. Tiffany is a corruption of theophany, which means epiphany; it is also a kind of thin transparent silk used in apparel, as Pliny the Elder wrote, to show women naked rather than cover and hide them. Cellophane is also see-through, diaphanous; a gastrodiaphane was an instrument that was introduced into the stomach, outlining its contours by a light, making it visible through a sufficiently thin abdominal wall. Sycophant, literally one who shows a fig, probably reflected an obscene meaning of the word “fig” (Greek σῦκον).

Other Greek derivatives of BHĀ include ϕῶς, light, giving words such as photic, photograph, photostat, and photon, and ϕαντασία, giving fantasia, fantastic, and fancy, a contraction of fantasy. The Fantasticks, a 1960 musical with music by Harvey Schmidt and lyrics by the American librettist Tom Jones, was based on Les Romanesques, a book by Edmond Rostand, better known for his play Cyrano de Bergerac. It won a Tony in 1991 and ran off-Broadway for 42 years (1960–2002), plus a revival (2006–2017). Its best known songs are the nostalgic melodies Try to Remember and Soon It’s Gonna Rain. Don’t confuse The Fantasticks with the Phantastics, a Kansas City nonet.

Phantastica is the name of a book by Louis Lewin (pronounced Leveen), once called the father of toxicology. He spent a lifetime studying morphine and cocaine, mescaline from Anhalonium Lewinii (the peyote plant, named after him by the German botanist Paul Hennings), Chavica betel, the harmala alkaloids, and Piper methysticum (kava kava). His most important works were a toxicology textbook and a compendium of information about adverse drug reactions. I reviewed Phantastica in The BMJ in 2007. Here’s what I wrote:

“[Lewin] describes a wide range of recreational drugs, beginning with pharmacological tolerance. His examples range from adaptation by freshwater amoebae to increasing concentrations of salt in their environment to the adaptability of Everest mountaineers to the adverse effects of altitude. He regales us with the information that hedgehogs can endure large quantities of cantharides, and that opium does not intoxicate ducks, hens, and doves.

“Lewin then deals in detail with the major psychoactive drugs, including morphine, heroin, cocaine, cannabis, peyotl, fly agaric, henbane, datura, alcohol, chloral, kava kava, betel, coffee, tea, cocoa, and tobacco, classifying them as euphorics, phantastics, inebriants, hypnotics, and excitants. His descriptions have not, in my view, anywhere been bettered. As the first investigator of Piper methysticum, he details the nature of the plant, how kava is prepared and drunk, its effects, and its active ingredients. He then paints the plight of the kavaist, ‘incessantly tormented with the craving for his favourite beverage  . . . degenerate through prolonged abuse . . . eyes red, inflamed, bloodshot, dull, bleary, and diminished in their functions . . . extremely emaciated …’ Not what Western purveyors of kava tell us. Of all the vignettes, that on alcohol is the best, illuminated by a profound historical perspective. Here we learn how alcoholic beverages have been prepared through the ages, around the world, by fermentation and distillation techniques used by Anglo-Saxons and Aymaras, Kalmuks and Quechuas, Tatars and Tungus. And a sober essay on temperance and abstinence gives counterbalance to the intoxicating language and lore of inebriation. One could get drunk on Lewin’s literary prose, with its historical allusions, without needing recourse to the substances themselves.”

But, as I also wrote, don’t rely on my hallucinations: read this classic yourself. 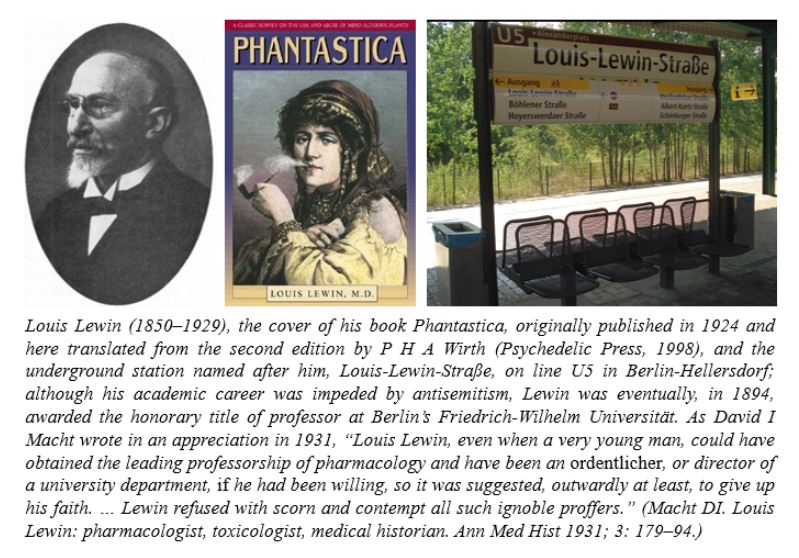