With my colleagues, Robin Ferner and Carl Heneghan, I recently contributed an editorial to The BMJ about drug shortages. Already online, it will appear in the print issue tomorrow (12 October 2019). So far, the modest altmetrics score includes 76 tweets, one from a senior editor of The BMJ: “crisis in the supply of medicines paints a dystopian future”.

The IndoEuropean root TOP meant to travel or reach a place. The Greek derivative τόπος meant a place in general and hence a part of the body, a passage in a piece of writing, a burial place, a district, a room in a house, and a house of the zodiac. Aristotle used τόπος to mean a class of general matters that would serve as a kind of place in which a rhetorician might look for suggestions for treating his subject, a so-called commonplace, a common or ordinary topic; arguments based on such topics were called topic axioms, rules, maxims, or arguments, or simply topics. A topos in English, a 1940s coinage, is a traditional motif or theme in a literary composition, a rhetorical commonplace, or a literary convention or formula.

The diminutive of τόπος is τόπιον, plural τόπια. In English, topia are interior wall-decorations like those found at Pompeii, consisting of the natural or artificial features of a place, such as landscapes or pictures of trees and bowers; topiary, a word that was introduced by Rabelais (topiaire), is the art of shaping trees and shrubs into ornamental shapes.

Atopy refers to the hypersensitivity syndrome that includes rashes in unusual places. Ectopic means out of place, applied to fetuses and testes, and tarsectopia is displacement of the tarsus. Other words that begin with topo- or end in -topia are listed in Tables 1 and 2. 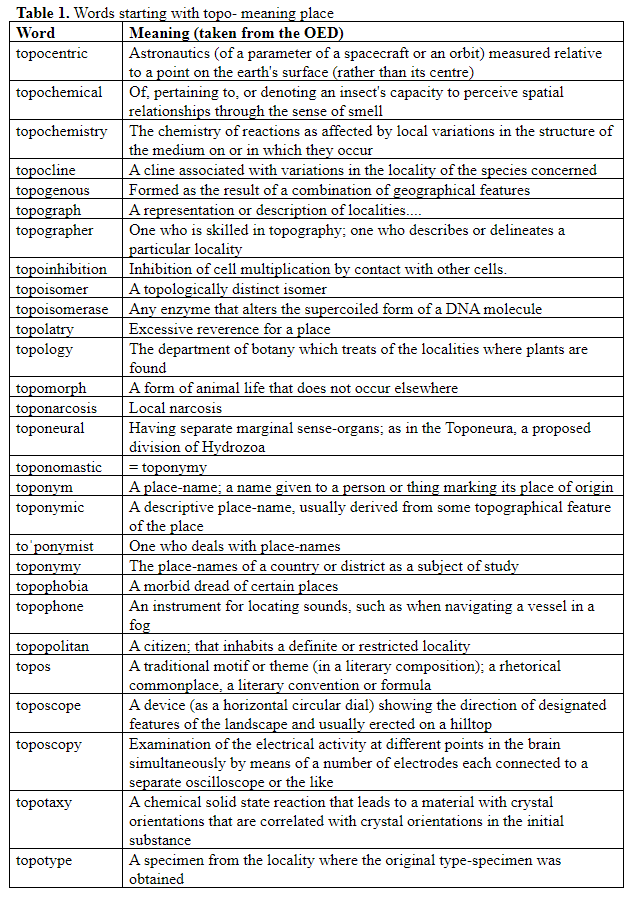 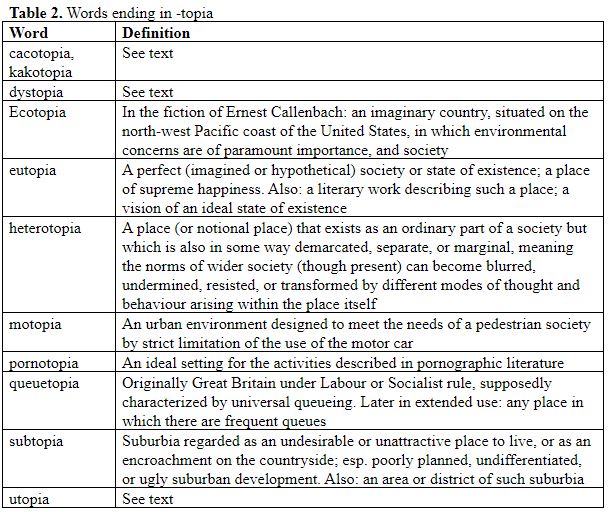 In 1516, Sir Thomas More published his novel De optimo rei publicae statu deque nova insula Utopia (On the Best Type of Republic and the New Island of Utopia), written in Latin. He had been in correspondence with the Dutch philosopher Erasmus, and they had discussed the title. “Utopia” is generally regarded as being from the Greek οὐ τόπος, no place, but it could equally well have come from εὐ τόπος, a good place. When Samuel Butler wrote his utopian novel in 1872 he called it Erewhon, a near reversal of “nowhere”.

In 1818, Jeremy Bentham, in A Catechism of Parliamentary Reform, took the eutopian route and coined its antonym, “cacotopia” (Greek κᾰκός, bad): “As a match for Utopia (or the imagined seat of the best government), suppose a Cacotopia (or the imagined seat of the worst government).” In 1915, Patrick Geddes made the same association in Cities in Evolution. An Introduction to the Town Planning Movement and to the Study of Civics: “The material alternatives of real economics, which these obsessions of money economics have been too long obfuscating, are broadly two, and each is towards realizing an ideal, a Utopia. These are the paleotechnic and the neotechnic—Kakotopia and Eutopia respectively.”

Then in 1952, Glenn Robert Negley and J Max Patrick, in The Quest for Utopia, invented the word dystopia: “The Mundus Alter et Idem [of Joseph Hall] is the opposite of eutopia, the ideal society: it is a dystopia, if it is permissible to coin a word.” They used the Greek prefix, δῠσ-, hard, bad, or unlucky. The OED defines “dystopia” as an imaginary place or condition in which everything is as bad as possible. Others have used the term “anti-utopia”, which is also used to describe criticisms of utopias. The term is not listed in the OED; the earliest instance I have found is from 1962.

Famous dystopias include 1984 by George Orwell, Brave New World by Aldous Huxley, and A Clockwork Orange by Anthony Burgess, but the form is nowadays most commonly associated with the post-apocalyptic novels of J G Ballard, such as Crash.

Drug shortages have been with us for a long time. The earliest description that I have found is in a November 1942 editorial in the Indian Medical Gazette, describing shortages of quinine and mepacrine (Figure 1). 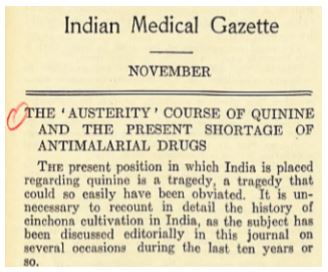 Figure 1. An extract from an anonymous editorial in the Indian Medical Gazette, November 1942, describing shortages of quinine and mepacrine

The pattern of publications listed in PubMed whose titles include “drug shortages” and similar terms is unusual. Sporadic single reports between 1942 and 2000 are followed by small clusters in 2000–2010, but then in 2011–12 the number suddenly rockets and then falls. It has now plateaued at about 30 papers per year (Figure 2). 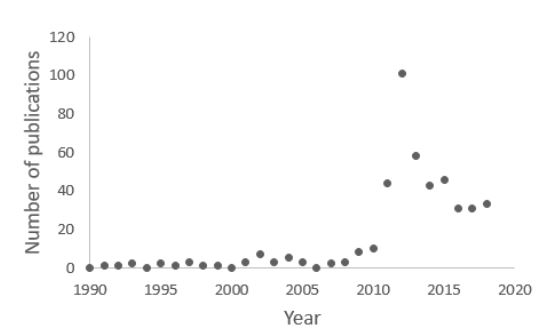 Figure 2. Numbers of publications containing “drug shortages” or related terms in their titles since 1990 (source PubMed)

The prospect of a no-deal Brexit has raised the spectre of major drug shortages. Whether it would make the current shortages worse, creating a therapeutic dystopia, remains to be seen.