Across the WHO South-East Asia Region, the health sector is stepping up its fight to reduce the health impacts of climate change 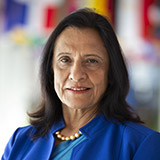 Addressing climate change, and protecting human health against the effects of it, means acting on two truths: First, that climate change is having an increasingly acute impact, with urgent cross-sectoral action needed to combat the problem; and second, that the health sector is uniquely positioned to inform and catalyze that action, and must embrace the opportunity to lead.

While the former is accepted wisdom, the latter is less so. That needs to change.

As global temperatures rise, so too does the impact on human health. Between 1991 and 1995 the WHO South-East Asia Region suffered 132 climate-related disasters, affecting around 260 million people. Just 20 years later, between 2011 and 2015, that had risen to 173 events involving an estimated 461 million people. [1] Unless urgent action is taken, between 2030 and 2050 climate change could cause an additional 250,000 deaths globally every year. [2]

The impact of climate-associated hazards goes further still. Region-wide, air pollution—which directly contributes to climate change—continues to cause a range of life-threatening illnesses such as respiratory and heart disease, and is increasingly associated with autism and diabetes. This year alone, from January to the time of writing, both ambient and indoor air pollution is estimated to have killed more than 900,000 people across the region, or around 3,750 people every 24 hours. We are living a daily public health emergency. [3]

As the UN’s Climate Action Summit in New York makes clear, that emergency has reached a critical juncture. In the battle against climate change and its contributing factors, the crisis it has generated and the threat to health it represents, there is no room for passengers.

Across the WHO South-East Asia Region, the health sector knows this. The region’s plan of action to implement the WHO Global Strategy on Health, Environment and Climate Change was endorsed at the Seventy-second Session of the WHO Regional Committee for South-East Asia. Gathering and analyzing climate-related health information, augmenting primary prevention strategies, enhancing cross-sectoral action and reducing the sector’s carbon footprint are key to building on the progress initiated by the 2017 Malé Declaration and reducing the health impact of climate change. [4] In doing so, the health sector will inform and catalyze action against climate change itself.

This is as it should be. As the plan of action emphasizes, the health sector’s normative power is immense. It must be harnessed to maximum effect. That includes by expanding research on the health impact of environmental risk factors, for example by better identifying climate-related events or establishing the cause of environment associated diseases. It also includes monitoring the success or otherwise of interventions to counter environmental risks. The information gleaned will prove crucial to supporting health systems to adapt to changing disease burdens via primary prevention, as well as helping policymakers across sectors grasp the magnitude of the problem and make smart investments to address it.

Enhancing cross-sectoral action, governance, and political and social support will have a similar effect. By actively contributing to monitoring and reporting on relevant Sustainable Development Goals, the health sector will promote buy-in and intensify collaboration. That will, in turn, promote accelerated action on climate change and the governance mechanisms it relies on. Similarly, efforts to engage planning authorities to better protect health will result in policies that reduce key contributors to climate change such as carbon emissions. This is precisely what the UN’s Clean Air Initiative—which was launched in New Delhi, India in July—demands. The initiative calls on governments at all levels to commit to achieving air quality that is safe for their citizens and to align climate and air pollution policies by 2030.

By further reducing its own carbon footprint, the health sector will diminish its contribution to climate change. In doing so, it will also demonstrate how effective sector-wide action can be taken. To that end, both the Malé Declaration and the Regional Plan of Action detail a raft of measures to adopt, from switching to renewable energy to promoting non-burn technologies to treat health sector waste. The continued uptake of these and other priorities will further demonstrate the Region’s leadership in promoting health facilities that are resilient, green and healthy. So too will efforts to share best practices, whether that means highlighting the award-winning waste management at Kathmandu’s Bir Hospital, Thailand’s Green and Clean Hospital initiative, or how hospitals in Greater Malé have leveraged global campaigns to create green and healthy hospitals.

As member states recognise, the potential to achieve rapid and lasting gains for both health and the climate is immense. And as the Region’s new Plan of Action demonstrates, the need to realise that potential could not be more clear, nor more urgent. As we witness the health impact of climate change increase before our eyes, the health sector must stand tall. It must protect health and embrace its role in addressing climate change itself.