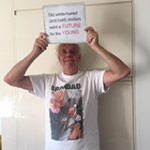 If you weren’t at today’s climate strike you should think seriously about being at the next one for three reasons. Firstly, there is no issue as crucial as climate chaos, which is causing harm and suffering now, will cause much more, and threatens the survival of our species. Secondly, it is uplifting to be part of something that is happening across the world, not only in big cities, but on every continent and in many small places. Thirdly, the protests are fun. The thought of going to one may be intimidating to people who have never attended a mass protest, but the mood is light despite the gravity of the threat. There are schoolchildren, babies in pushchairs, and grandparents like me. 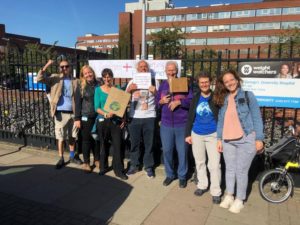 My first protest was outside St George’s Hospital in South London, one of the largest hospitals in Europe and a trauma centre. When I arrived by bike a lone surgeon was fastening a sign advertising the protest to the railings outside the hospital. The hospital had forbidden a protest inside the hospital, and the hospital’s sustainability unit said that it had never heard of the strike. I reflected that you can’t sustain the NHS if the planet is not sustained. I was wearing a tee-shirt that said “Grandad” and had a picture of me with my grandson, and I carried a sign made from a Prosecco box (evoking the Bollinger Bolshevik) saying “White haired (and bald) doctors want a FUTURE for the YOUNG,” not the wittiest of signs but heartfelt.

Soon the surgeon and I were joined by my brother, a comedian who had a stint in the intensive care unit of the hospital and is the self-styled mayor of Balham (nights only), the surgeon’s father and husband, a pharmacist, a nurse, and a medical student. This might not seem like much of a protest for a hospital that has a staff of thousands and hundreds of students, especially when four of us were neither employees nor students, but we were seven more than the lone Greta Thunberg, whose strike outside the Swedish Parliament inspired today’s strike of millions around the world. She will be joining a protest of 1.1 million children in New York who have given the day off to protest. 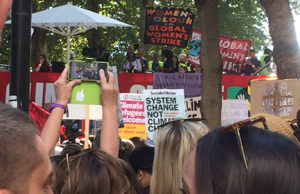 After our protest I cycled to London’s main protest beside our prorogued parliament. (If you are not from Britain you’ll never have head the word prorogued, and nobody here had until our prime minister prorogued parliament: it means suspended.) I joined thousands of people of all ages but mostly young. Voices boomed from the top of a bus: “You have power, use the power”; “We need to start right here right now”; “Climate justice demands justice for refugees and indigenous people”; “Women of colour across the world are fighting for climate justice”; “Bolivia is burning.” We shouted our approval, and we chanted “No climate justice without migrant justice.” Then a band began to play form the top of the bus. We swayed to the music that had the energy of punk.

Banners, some brightly coloured said “Think or swim”; “If you were smarter we’d be in school” (a clever one that); “Historians demand a future”; “Take back tomorrow” (a play on the Brexiters’ slogan of “Take back control”); “The oceans are rising and so are we”; “Save our bees”; “Save our squids”; and, remember this is primarily a strike of school students, “Global warming is worse than sprouts.”

I wandered among the crowds towards Parliament Square. A man with a baby only a few weeks old on his chest had a sign saying “Save humans.” A tall bald man with a gold suit and gold earrings had a tree on his head. I found a group of doctors in surgical scrubs in the centre of the square eating vegetarian food which was distributed for free. The streets and the square, which are normally filled with polluting traffic, were instead filled by people gently protesting. It felt like the best kind of festival.

I urge you to be at the next protest, perhaps just for an hour or so outside your place of work or perhaps at one of the larger protests. We need the kind of coordinated action that is usually seen only at time of war, and we need that action to continue. If the government sees millions protesting it will respond, and every person joining the protest makes that response more likely.