Last week I discussed composite outcomes and the initiative known as COMET (Core Outcome Measures in Effectiveness Trials). In doing so I asked how many core outcome sets (lists of outcomes that are considered essential) have dealt with harms rather than benefits.

I have now searched the COMET database for the term “adverse” and have found 97 items, of which 51 are listed as relating to core outcome sets.

The core sets were developed by discussions of various kinds, usually with experts and in one case also with patients. In nine cases the Delphi method was specifically mentioned and in six cases consensus meetings; other methods were referred to as surveys, or discussions by panels or task forces; in a few cases the authors developed their core sets themselves.

So, how many sets deal with harms? The results are summarized in the following diagram. 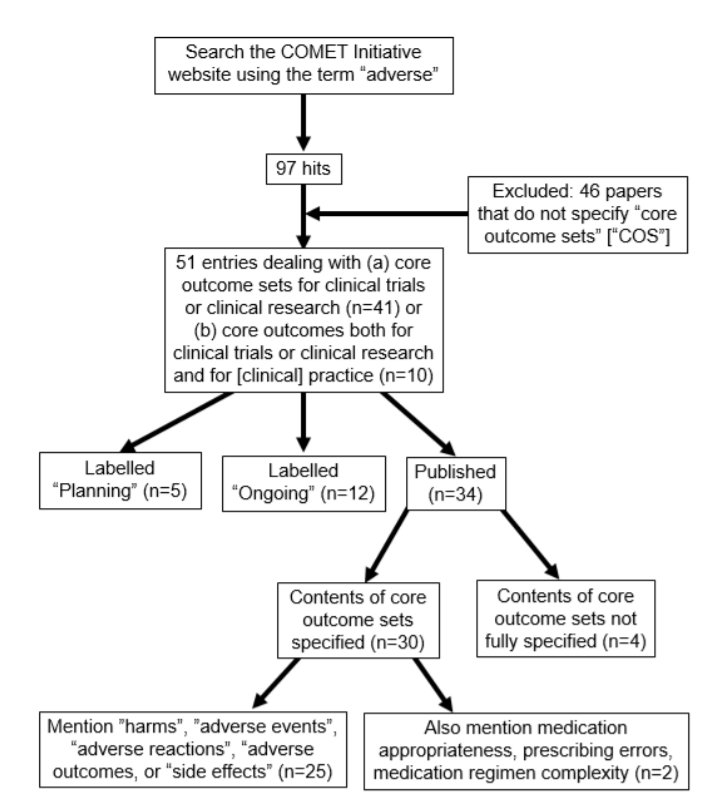 The numbers of items included in each set varied from 2 to 14 (median 7). Most of the items listed in core outcomes sets related to the nature of the condition being treated; pain (n=11) and impaired haemostasis (n=8) were the most frequent specific entries. Quality of life (n=9) and satisfaction with treatment (n=8) were also mentioned.

Harms were specified in 25 cases, usually as “adverse events” (n=16), “adverse effects” (n=3), or “adverse [drug] reactions” (n=3). “Adverse outcomes” featured only once, as did “harms”. The vague term “side effects” appeared only once. In only two cases were more specific terms, such as “medication appropriateness” and “medication regimen complexity”, used, and prescribing was mentioned only once, in the context of prescribing errors.

Death (or mortality) featured 11 times, but the cause of death (e.g. as a complication of the illness or of the intervention) was never specified as something to be recorded.

Adherence to the intervention was referred to only once (as “compliance to treatment regimen”).

All this is rather disappointing, particularly from the point of view of the attention being paid to pharmacological interventions, or rather the lack of it. Merely to specify “adverse events”, or some suchlike term, is not enough. Here are my proposals for important items that should be included in all core outcome sets:

The use of core outcome sets should reduce heterogeneity between trials and improve reporting, leading to higher quality trials and making it easier for the results of different trials to be compared, contrasted, and combined, reducing waste in research. That their importance is recognized is to an extent reflected in the impact factors of the journals in which the papers I have surveyed were published and the citations that the published papers have received (both illustrated in the figure below). Prespecification of agreed core sets of outcomes to be measured, at least in clinical effectiveness trials, should be de rigueur. 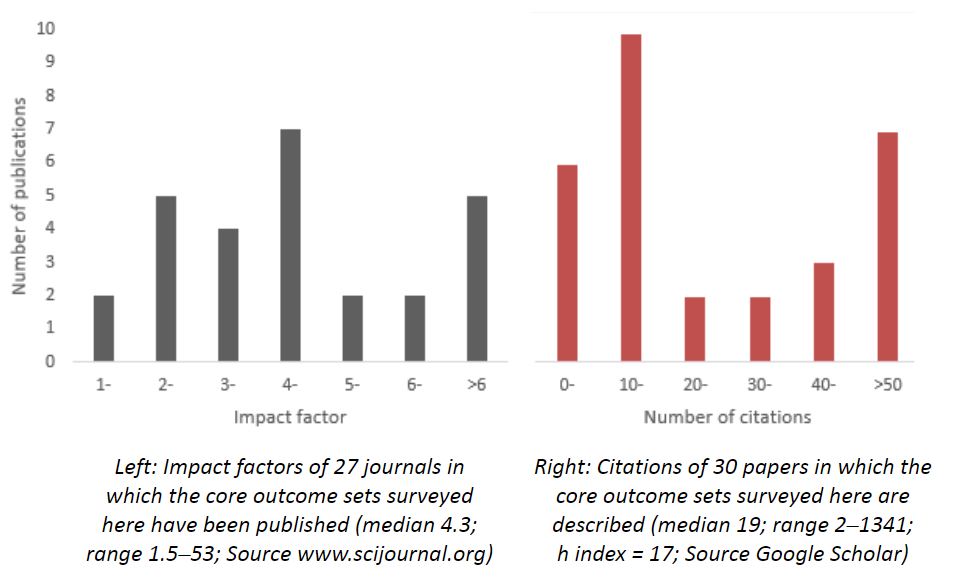