To compose is to put things together, and putting things together makes them composite. The word entered English as “composita”, short for “composita columna”, an architectural term. It first appeared in The First and Chief Grounds of Architecture . . . (1563), the earliest English text on classical architecture, by the English architect John Shute. It was not, I think, coincidental that this was just one year after the publication of a book by the Italian architect Giacomo Barozzi da Vignola (pronounced veen-yolah), Regola delli cinque ordini d’architettura (1562). Vignola described the five orders of classical architecture—Tuscan, Doric, Ionic, Corinthian, and composite, distinguishable by the shapes of the tops of the columns (the capitals). The Composite order is a combination of the Ionic and Corinthian. 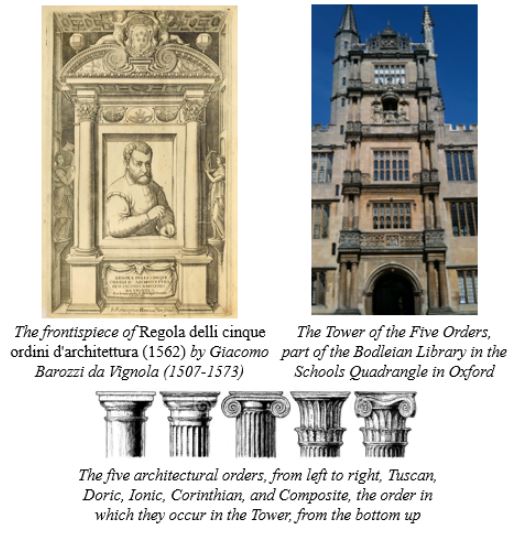 In the 17th century the meaning of composite became more general: compound or made up of various parts or elements; or, more simply, not simple in structure. The idea that things may be compounded then spread to a wide range of fields: a composite number is one that is not prime; a composite sailing vessel has an iron framework covered with wood; a composite candle is one made of a mixture of substances, originally stearic acid and the stearin of coconut oil; a composite portrait is a single photographic portrait, produced by combining separate portraits of two or more people, nowadays easily done by photoshopping.

A composite flower is one that looks like a single flower but is in fact composed of many smaller individual flowers (florets); such flowers belong to the family of Compositae, now called Asteraceae, of which there are about 600 genera, including various types of asters (daisies), arnica, chamomile, goldeneye, marigold, snakeroot, tansy, thistle, and wormwood.

In clinical efficacy trials outcomes are typically classified as either primary or secondary. The primary outcome is regarded as being the most important or clinically relevant. It determines the trial size, according to the expectation that a given effect size will be detectable. Effect sizes are not guaranteed to be detectable for secondary outcomes. Thus, certain potentially important outcomes may not be properly studied—harms, for example, both the nature and frequency of which are often unpredictable, and which may be of less interest to those who are keen to demonstrate benefits. However, in effectiveness trials (also called pragmatic trials), if one is unwilling to regard important outcomes as secondary, one may want to include more than one outcome in the primary category—a composite outcome.

The idea of a composite core outcome set, combining earlier ideas of individual core outcome measures and sets of measures, first emerged, as far as I can discover, as “‘core sets’ of outcomes” in a 2008 systematic review; the inverted commas suggested a relatively recent usage. The figure below shows the evolution of interest in this, from publications in the field. 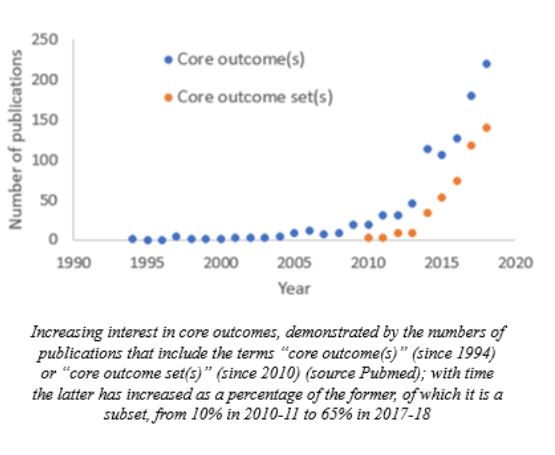 This soon led to the initiative known as COMET (Core Outcome Measures in Effectiveness Trials), the originators of which first met in 2010. The COMET Handbook outlines the objectives of the initiative and describes current knowledge of how core sets are developed, implemented, reviewed, and adopted, and makes recommendations for practice and research. The use of core outcome sets should reduce heterogeneity between trials and improve reporting. It should therefore lead to higher quality trials and make it easier for the results of trials to be compared, contrasted, and combined, reducing waste in research.

How many core outcome sets deal with harms rather than benefits? I have searched databases of bioscience publications for terms containing the phrase “core set” coupled with an extensive list of terms related to adverse drug reactions; I have found nothing. Searching the COMET database for terms related to adverse reactions yields 97 items, of which 51 are listed as containing core outcome sets. How many of these specify sets of adverse drug reactions, and how many of them involve sets studied prospectively, I have yet to discover.