In the last few weeks I have been discussing criteria that prescribers may consider in deciding whether to introduce a therapeutic intervention. They include:

At the end of these explorations I came to the conclusion that it would be helpful to introduce two new concepts to clarify the ideas that the various terms imply: minimum desirable benefits and maximum acceptable harms. These terms imply that what is acceptable to the patient (or family or carers) in terms of beneficial outcomes may not be what the patient actually wants, and that whatever the patient wants in the way of benefit must be tempered by the realization that harms can occur and that what matters is not either the desire to achieve benefit nor the hope of avoiding harms, but a combination of the two, commonly expressed as the benefit to harm balance, which has three components:

The harm side of the balance is a composite that reflects the difference in risks from the two possible sources of harm.

In considering whether individual benefit is to be gained, judgment in the first place relies on the results of population studies, combined with information about characteristics of the patient that may predict whether and to what extent benefit is likely (e.g. age, sex, renal and hepatic function, concurrent medications that might interact with the proposed intervention, previous experience of other interventions, and in a few cases genetic factors).

If an intervention is introduced, one then has the opportunity to determine whether the desired outcome has been achieved, by monitoring. Here two forms of information are available. First, objective measures of outcomes: Has the blood pressure fallen satisfactorily? Has the haemoglobin concentration risen? Is the cellulitis regressing?

Secondly, and particularly when objective observations are not possible, one relies on the patient’s report of the extent to which unwanted symptoms have been reduced or eliminated: Is there less anxiety? Is the pain less severe? Has the anorexia abated, the appetite improved? 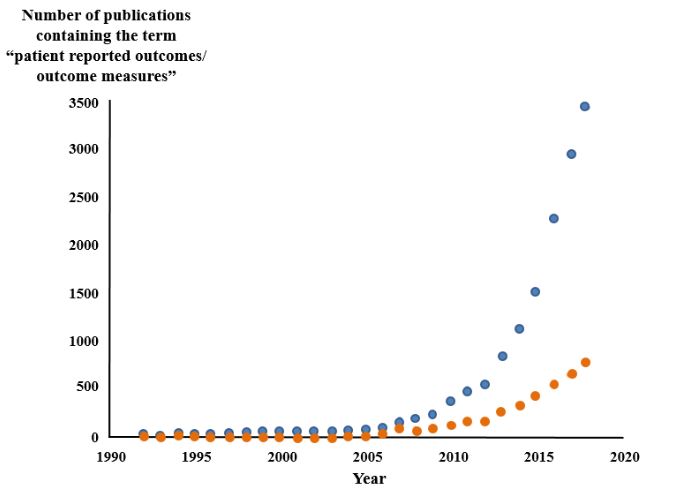 Figure 1. The numbers of papers containing the term “patient reported outcomes/outcome measures” since 1992 (source PubMed); one paper in 1976 has been omitted; blue symbols text words, orange symbols titles; the term has become increasingly popular since about 2010

Other terms that have been affixed to “patient reported” include: outcome instrument, physician-patient discussion, purpose of visit, problem status, experience, discussion, satisfaction, change, [severity of] symptoms, outcomes difference, and questionnaires.