Eighteen months since the defeat of Daesh—the so-called Islamic State—Iraq appears to be gradually returning to some semblance of normality.

Certainly, in my own field, medicine and healthcare, the country of my birth now has an air of guarded optimism. A hugely welcome change from the feelings I had the last time I visited a year or so ago.

I travelled to Basra, the southern city that sits on top of the fifth largest oil reserves in the world, and the historic and immensely beautiful Arab marshes—now a UNESCO world heritage site.

This was my fourth visit, and each time I am filled with admiration and respect for the local people, who despite all the difficulties, unrest, and the lack of benefit from that potential huge oil wealth, continue their positive momentum to build a future of stability and growth.

Since the 2003 Gulf war, the UK has done a lot of training and work with doctors outside Iraq. Now there is a shift towards doing more work inside Iraq itself and rebuilding the country from within.

The government steps to improve the healthcare in Basra include the recent establishment of specialised hospitals for children, cancer and digestive systems as well as several new primary healthcare centres. A dedicated heart hospital is currently under construction. The post graduate medical training curriculum have been revised to include several new sub-specialities.

I attended an international meeting in the Basra Medical School which presented more than 75 Iraqi-led medical studies and was well attended by more than 300 delegates and senior officials, professors from Basra university and academics from other universities in Iraq.

I gave an insight into my own experience with the cancer screening programmes in the UK for bowel and liver cancers, to help transfer knowledge and learned lessons to my Iraqi medical colleagues. The concept was well received, and I am working with the local authorities in Basra to implement the action points from the meeting.

I hope to now set up a bowel cancer screening programme like the one we have in the UK. This programme would detect early signs of the cancer in those who are above the age of 60 by using simple stool examination kits.

The quality of the studies and scientific discussion workshops was impressive. Despite all the difficulties and limited resources, Iraqi doctors and scientists managed to maintain their knowledge and pursue good quality research in various aspects of medicine. I was also pleased to see that a second medical school in Basra was launched recently to meet the demand for doctors in the southern part of Iraq. Its medical curriculum is based on the up-to-date teaching methods that we use in the UK.

I volunteered to see hundreds of patients in remote areas of Basra, such as those living in underserved village of Al-Khora. There, in the shadow of the huge oil and gas fields, a clinic has been built by the British charity, Baroness Nicholson’s AMAR Foundation.

It was hugely impressive to see that the charity—run entirely by local professionals—was pioneering Iraq’s first use of  IT in health services; for example, a smart card for each family that holds information about the vaccinations and basic medical records for patients in the local area.

It saves a lot of time and ensures families and children are up to date with their vaccinations and health visits.

I visited the incredible Arab Marshes. The area is inhabited largely by subsistence farmers who rely entirely on agriculture and raising animals, especially water buffalo, for their survival. Access to medical care in the far-off hospitals of the big cities is often not an option for them.

There is still a huge amount of work to be done in this part of the Middle East, and Iraqis most certainly still need all the outside help they can get. For example, there is a great need to develop more specialised centres, primary health centres, train more doctors and nurses.

Iraqi doctors and nurses need indemnity to allow them care for their patients with no fear or pressure from patients’ families or relatives. I attended a workshop in Basra that discussed launching a new government-funded health insurance legislation to cover the increasing costs of healthcare that most patients cannot afford.

This is a great step forward to provide equality and quality in health services to everyone. We need more support to UK based charities such as AMAR to facilitate the development of projects to promote school education, emergency aid, health services and infrastructure. If this positive momentum continues, it will not be long until the Iraq healthcare system, that was once was the best in the region, achieves its full potential. 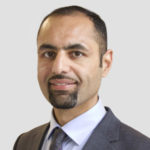 Laith Al-Rubaiy is a honorary senior clinical lecturer, Swansea University Medical School, Swansea, and a consultant gastroenterologist and hepatologist, St Mark’s hospital, London. He graduated from Basra Medical College in 2003 before coming to the UK in 2005. He has made several visits to Basra, his home town, to provide much needed medical care to remote and rural villages with the help of the UK-based chairty, AMAR foundation. Twitter: @Laith_Rubaiy.