The general idea of a clinically important difference is by no means new. Here it is, for example, in a 1949 paper [1]: “A clinically important difference may exist between the amount of accommodation which a patient will use to see clearly a near object when wearing contact lenses and when wearing spectacle lenses.” There are probably earlier instances.

However, there are earlier instances of the term, all of them in papers by Guyatt and his colleagues [5,6,7,8]. In the earliest, for example [5], they wrote that “… we suggest a new index of responsiveness to assess the usefulness of instruments designed to measure change over time. This statistic, which relates the minimal clinically important difference to the variability in stable subjects, has direct sample size implications.”

These earlier instances suggest that the term was already in use, perhaps even before 1987, although I have found no other examples. Nor have I have found instances before 1998 of variants, such as “minimal clinically relevant difference” or “minimal clinically meaningful difference”, the former in the European Commission’s “Rules Governing Medicinal Products in the European Union” and the latter in a book titled Osteoarthritis, edited by Brandt, Doherty, and Lohmander (OUP, 1998). Parkinson’s disease has also spawned the term “minimal clinically relevant incremental difference”, the earliest instance being in 2003 [9].

In 1994, Guyatt and his colleagues suggested that the word “clinically” could be omitted from MCID, since “this terminology focuses attention on the clinical arena rather than patients’ experience in their day-to-day lives” [10,11]. They deﬁned the minimal important difference (MID) as “the smallest difference in score in the outcome of interest that informed patients or informed proxies perceive as important, either beneﬁcial or harmful, and which would lead the patient or clinician to consider a change in the management” [12].

In advance of a study you might ask patients how much anticipated benefit they would consider worthwhile, for example how many extra months of good-quality life in the treatment of a terminal illness. That estimate could be considered to be the minimum desirable incremental 50% survival time. The size of trial needed to demonstrate whether an intervention produced the estimated MID could then be calculated in the usual way, with selected type 1 and type 2 errors. I suspect, however, that anticipated effect sizes are often back-calculated, using estimates of the numbers of subjects that investigators think they are likely to be able to recruit.

Although the concept of the MCID has been around since the 1980s, it was not until 2010 that its use started to increase, and even now the total number of papers in which the term has even been mentioned is relatively small (Figure 1). It is certainly not clear how often the minimal clinically important difference has been calculated from reported data [13]. 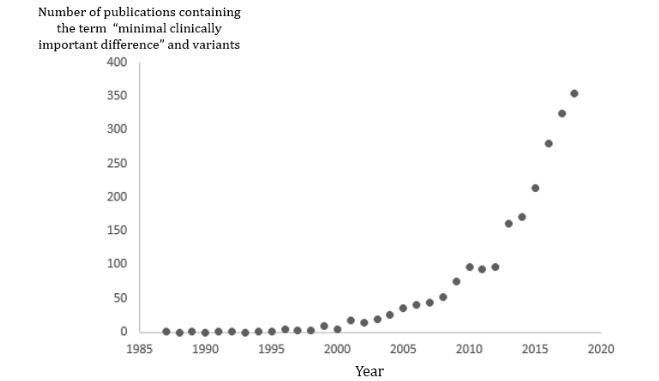 Figure 1. The numbers of papers containing the term “minimal clinically important difference” and variants (e.g. “change” or “improvement” instead of “difference”) since 1987 (source PubMed); plotting the data as a ratio of all publications gives a graph with a very similar shape

Acknowledgements: Thanks to Carl Heneghan and David Nunan for helpful comments.