I had been losing sight slowly at first, but later scarily quickly. By the time I had my first surgery, I was badly visually impaired. I was lucky, though. It was cataracts—surgery can fix that problem, and I could have it. That got me thinking a lot about evidence and choice, and how little one can mean without the other.

When I was a kid, cataracts were still a uniformly grim business. Back then, cataract treatment was just lens removal, with thick, thick glasses to try to help you focus afterwards. Artificial lenses for the eye—intraocular lenses (IOLs)—were still too primitive, and so were the procedures to implant them.

It took decades from IOLs’ invention at the end of the 1940s for the procedure to be widely used, and it wasn’t routine until the 1980s. The first FDA approval for an IOL was in 1981.

The IOL was invented by ophthalmologist Harold Ridley. In world war II, he had tried to remove plastic shards from the eyes of a pilot, Gordon Cleaver, whose cockpit was shattered during the 1940 Battle for Britain. He failed, but Cleaver’s eyes did just fine with the plastic in them.

A few years later, a medical student watching Ridley remove a cataract asked why he didn’t replace it and it clicked: Ridley got the first IOL made out of the same plastic as the fighter pilot’s cockpit.

That got over the major hurdle, but there were many others: lenses needed to be better, techniques for inserting them in the right spot and keeping them there needed development, and microscope-aided surgery had a way to go too. In the meantime, lots of people with cataracts lost sight after trying those early procedures. A colleague of Ridley’s, Hugh Williams, wrote years later that at one point, even Ridley gave up hope it would ever really work.

Why did it take decades to be viable? According to Williams:

Ridley hoped to present the results of his secret experimental surgery with perhaps a 2 year follow up but as knowledge of the project leaked out it was published first in the little read journal, St Thomas’s Hospital Report, to establish his priority . . .

That Ridley chose to initiate his work in secret without any previous experimental research, at St Thomas’s Hospital, rather than at Moorfields, may have led to resentment on the part of Sir Stewart Duke-Elder whose immense power of influence and support as director of research at the Institute of Ophthalmology and Moorfields Eye Hospital, was thereafter denied to Ridley. Today it is difficult to imagine to what extent Ridley’s idea became professionally scorned and dismissed. Had his concept of pseudophakia [artificial lenses] originally been openly presented, supported, further researched, and scientifically developed, the collateral loss of sight suffered by patients in those early years might have been avoided with probably little loss of the time it has taken for the safety, efficacy, and validity of the device to become so self evident.

So many of the pathologies that hold back medical science are right there, aren’t they? The power we grant to authorities, for one. We do that still. “Evidence based medicine” was supposed to overturn that culture. Instead, it’s added its own authorities to the mix. And just as with the traditional kind, there are great ones, and ones who abuse their power. The tools of evidence generation and assessment are powerful, but they don’t protect us from giant egos and hubris. 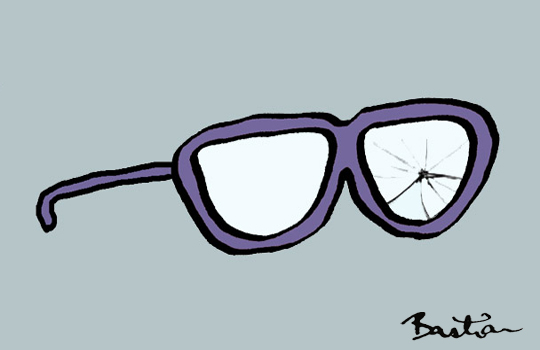 Clinical trials weren’t a big feature of surgical developments back in the 1950s. That always favours people taking a strong position, “secure in the knowledge that no strong evidence existed that could undermine any one of their multitude of conflicting opinions.” The first clinical trial of IOLs I could find was in 1977. They are common now, although evidence is still patchy. There were at least some systematic reviews that helped with the key choices I could make—including some Cochrane reviews with good plain language summaries like this one.

Evidence isn’t the biggest issue for cataract surgery, though: it’s the lack of choice that comes from not having access to the treatment. Cataract causes about half of all blindness—it’s the most common cause—and we came up with a cure for it. But an estimated 20 million blind people can’t get it. That’s mostly in lower income countries, but even some rich countries are rationing it through waiting times or by treating only one eye.

The ophthalmologist Fred Hollows was a towering figure to me when I was a teenager. I’m even more appreciative now that I’ve experienced bad visual impairment and cataract surgery. In the 1980s, he focused on treating cataract internationally, establishing a foundation to keep it all going when he was facing death from cancer.

Hollows had gotten factories to produce lenses off the ground in Eritrea and Vietnam. The Fred Hollows Foundation say that as of last year, they have “restored sight to over two and a half million people,” although it’s not clear how that number is calculated. Still, between the tens of thousands of surgeons they’ve trained, and the cheap IOLs, it’s got to be an awful lot of people. In 2012, they reported that they had the price of an IOL down to less than $10, with the whole treatment down to $25 in some countries: over five million IOLs had been exported to 75 countries.

It’s a stark contrast to the thousands this costs in countries like the one I live in. We get a lot more choices when healthcare costs are reasonable. Somewhere between a rock bottom standard of living for healthcare workers along the whole chain, and profiteering by holding relief of people’s suffering hostage, there are fair prices.

Late in 2017, the UK agency NICE weighed in, arguing that rationing of cataract surgery should stop, based on their systematic review that concluded that even doing the second eye is cost effective. Phew! That kind of evidence is often the death knell for choice, though, isn’t it? All it takes is for studies to not be done, or to not address the right questions, or not have a measurement tool that can detect important changes in people’s lives. Our choices so often hang by the thread of researchers’ choices and their values, skills, and motivations.

And what happened with my choice and sight? I don’t think my first cataract surgery could have gone any better. Taking off the patch, and seeing the world clearly for the first time in ages felt like a miracle. It’s an intensely emotional experience: who knew my baby granddaughter’s little nose crinkles adorably when she laughs? It makes my heart ache, though, for everyone who doesn’t get the choice.

Hilda Bastian is a scientist, blogger, and cartoonist. She is currently studying some factors affecting the validity of systematic reviews. Twitter @hildabast

This content was originally posted on the PLOS Blogs Network.