The Medical Act 1858 gave the responsibility for producing the new pharmacopoeia to a Commission established by the General Council of Medical Education and Registration of the United Kingdom (now the General Medical Council), which the Act had also established.

“Pharmacopoeia” entered English at the start of the 17th century. Coincidentally the first recorded instance is from 1618, the year in which the Pharmacopoeia Londinensis was first published, and is found in a reference to a “Pharmacopaea” by Querketanus in a translation by Thomas Bretnor of a Latin text by Angelus Sala Vincentinus Venitus (1576–1637) called Opiologia: or, A treatise concerning the nature, properties, true preparation and safe use and administration of opium. For the comfort and ease of all such persons as are inwardly afflicted with any extreame grief, or languishing pain, especially such as deprive the body of all natural rest, and can be cured by no other means or medicine whatsoever. A pharmacopoeia is “an authoritative or official treatise containing listings of approved drugs with their formulations, standards of purity and strength, and uses” (Oxford English Dictionary). In the early 18th century it also came to mean a dispensary or collection of medicines, as Nathan Bailey put it in his Universal Etymological English Dictionary of 1721 (Figure 1), but it is the earlier meaning that prevails today. 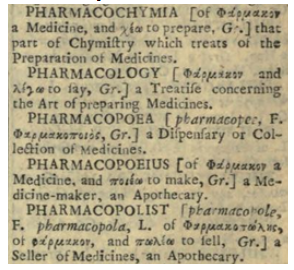 An earlier word still, “pharmacopinax”, came from the Greek word πίναξ, a board or plank, a platter, a public notice board, and a board or plate for painting, drawing, or printing on, a writing-tablet. In postclassical Latin it meant an astronomical table or a table for calculating the date of Easter. It also appeared in several Latin titles, such as Pinax iconicus antiquorum ac variorum in sepulturis rituum” by Lilius Gregorius Giraldus (Lyon, 1556), Pinax theatri botanici by Caspar Bauhin (Basel, 1623), and Pinax rerum naturalium Britannicarum, by Christopher Merrett (London, 1666). However, the only English pharmacopoeial instance of which I am aware is Pharmaco-Pinax, or a Table and Taxe of the Pryces of all vsuall Medicaments, Simple and composed, contained in D. Gordon’s  Apothecarie and Chymicall Shop, published in Aberdeen in 1625 (Figure 2). A table of tablets, so to speak. 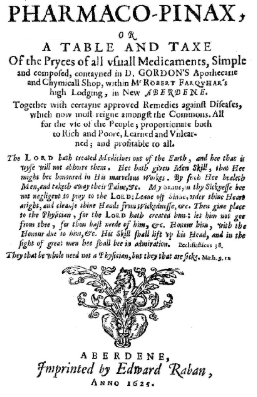 Figure 2.  The title page of the Aberdeen Pharmaco-Pinax of 1625