Last week, during my exploration of the Medicines Act 1968, I discussed its provisions in relation to the promotion of sales of medicinal products, and the idea of a data sheet that the Act introduced.

The Latin verb to give is dārē (in which both vowels are pronounced separately, as marked). The verb reduplicates in the perfect tense as dedi, mimicking the repetition of a past action; giving is meant to be repetitive. The past participle of the verb is datum, meaning “given”, which then becomes a noun of neuter gender, meaning something that is given or is due to be given—a present, a debit, or a debt. The plural of “datum” is “data”. But whether you treat “data” in English as singular or plural is debated. Computer scientists tend to prefer the singular, but a majority of them and most others still use the plural.

One problem in considering whether “data” is singular or plural arises partly from the fact that the singular form, datum, is generally used only in a technical sense to mean a baseline, benchmark, or reference point (as in datum level, datum line, datum mark, datum point). Although it can be used to mean a single piece of information, such usage is rare. On the other hand, “data” is used to mean either a whole lot of pieces of information (technically the plural of a count noun—one datum, many data) or a collection of such pieces (technically a non-count or mass noun—much data).

You can test whether you want to use the plural or singular by qualifying “data” with words such as “all” (“all the data are”), “many” (there are many data), and “much” (“much data supports”). Doing that will help you to decide whether you are thinking of the individual pieces of information or the whole collection or a discrete part of it. I have discussed all this in more detail elsewhere. Surprisingly, since so many people seem to say “data is” or “this data” these days, when I surveyed the instances of singular and plural usages in Pubmed I found that more than 80% of all authors used the plural form (Figure 1). There was however, a difference across scientific specialties, with pharmacologists, pathologists, biochemists, clinicians, and veterinarians all using the plural more than 90% of the time, contrasting with epidemiologists (89%), statisticians (78%), mathematicians (71%), and computer scientists (67%). 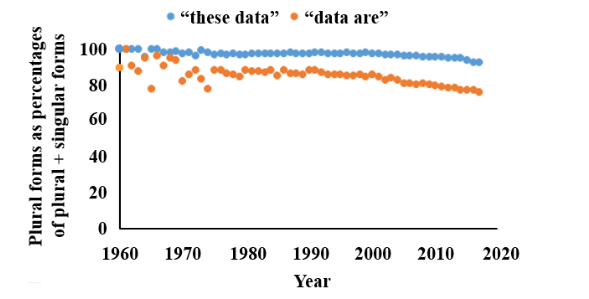 Figure 1. The frequencies of the plural terms “these data” and “data are” as textwords in Pubmed, compared with the singular terms “this data” and “data is”, expressed as the percentages of all plural plus singular instances 1960–2017; the plural forms are still used in over 80% of cases overall

So is “data” singular or plural? Etymology, grammar, and usage all say plural, a triple whammy, although there may be some instances when the singular form can be used. My own preference is to regard “data” as plural and to use “information” as the singular. However, when “data” (plural) is used attributively, as in “database”, “databank”, and “data sheet”, the compound form is obviously singular.

The Medicines (Data Sheet) Regulations 1972 defined the particulars to be described in three schedules. Schedule 1 described the type of paper and print required; white A5 paper with black printing, typed in not less than 6 Didot Univers font or equivalent, with headings and subheadings in no more than 18 point bold.

Schedules 2 and 3 described the particulars required for medicinal products for human and animal use respectively: name of the product, pharmaceutical formulation (with ingredients), uses (actions and authorized indications), dosage and administration, contraindications, warnings, precautions, and action to be taken after overdosage, pharmaceutical precautions (e.g. storage conditions), legal category, package quantities, product licence numbers, and the names and addresses of those responsible for sale and supply. 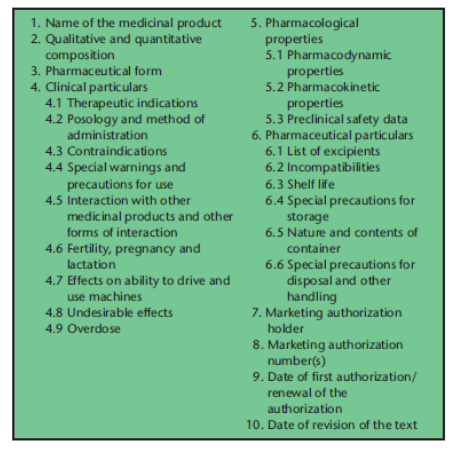 Figure 2. The headings under which information about a medicinal product must be given in the Summary of Product Characteristics by EU law (from Aronson & Ferner. Br J Clin Pharmacol 2017; 83(12): 2615-25)

The regulations also allowed for the publication of a compendium of such data sheets, and the first such compendium was published in December 1973. Those compendia were later replaced by compendia of the SmPCs, and those are now available online as the electronic Medicine Compendium (eMC). What a compendium actually is, or should be, will have to wait for another day.