A billion people in the world have hypertension, and without intervention it will be 1.5 billion by 2025. The World Health Organisation (WHO) says that hypertension is the major global risk factor for death below 70, and yet it has also reported that despite three high level meetings at the United Nations on non-communicable disease (NCD) progress in managing NCD, including hypertension, is “dangerously slow.” Most low and middle income countries have weak health systems that have done moderately well with managing infectious disease and maternal and child health, but struggle with responding to NCD. A forum held at the end of last month in Colombo, Sri Lanka, discussed better ways of responding to hypertension and cardiometabolic disease in South Asia. Sri Lanka itself has better health indices than any of the other South Asian countries and a stronger free primary healthcare system, but it is so far failing to respond adequately to hypertension and NCD.

Some 16%-18% of adults in Sri Lanka have diabetes and between a quarter and a third have hypertension, said Asita de Silva, from the University of Kelaniya, Sri Lanka; yet despite five to six classes of antihypertensive drugs being available free only about 40% of patients with hypertension are well controlled. Almost two-thirds of patients adhere poorly to treatment, and most patients are taking only one drug, when it is now well established that some 80% of patients need two drugs to achieve control. Something is clearly wrong with the “delivery and monitoring system,” and the COBRA-BPS trial is an attempt to improve the delivery system and so achieve control in a higher proportion of patients with hypertension. 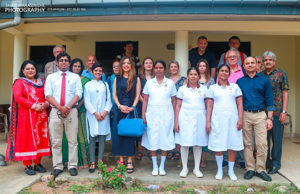 COBRA-BPS, explained the chief principal investigator Tazeen Jafar from Duke-NUS Medical School of Singapore, is a cluster randomised trial that is testing whether an intervention in the health system with five components can cost effectively achieve a reduction in systolic blood pressure in patients with hypertension. The five components are: health education in the home by government community health workers; monitoring of blood pressure and then referral to a trained general practitioner; training healthcare providers in the management of hypertension; creating triage counters for hypertension in government clinics; and financing for additional services for people with low incomes. Importantly the programme builds on what is already there in government health systems. It also builds on a previous trial led by Jafar that showed in urban Karachi a combination of home education by community healthcare workers and training of general practitioners reduced systolic blood pressure by about 5 mmHg more than either intervention alone or usual care. It is clear, said Jafar, that multiple interventions are needed for programmes to be effective.

Harsha de Silva, State Minister of National Policies and Economic Affairs, told the forum that the Sri Lanka government was serious about acting on hypertension and NCD and wanted to know how best to spend the money it had. He was proud that Sri Lanka has had free healthcare and education since the 60s, but he knew that new challenges were arising with the aging of the population and the rise in NCD. Sri Lanka spends 1.5% of its gross domestic product on health, second only to defence, and the government wants to quadruple that amount. Yet currently the spend per head on healthcare is $US118 compared with around $US6000-US$8000 in most developed countries. There is a line in the health budget specifically for NCD, and we learnt later on a visit to a rural primary health clinic that the problem with countering NCD is currently not lack of money but lack of effective ways in which to spend it.

Despite the free healthcare, about half of health expenditure in Sri Lanka is on the private system. On the visit to a rural area about 100km north of Colombo we met a woman with diabetes, hypertension, and renal failure who was spending about a third of the household income on visits to doctors and drugs despite living only about a kilometre from the free clinic. When asked about her worries for the future the 54-year-old woman told us that she didn’t expect to live much longer. We understood why the woman saw doctors privately when we visited the clinic, saw lines of patients, and met the only doctor, a young man who had almost no training after medical school and saw 25 patients an hour from 8am until 4pm with a break for lunch. He had less than three minutes for each patient, which didn’t matter to some of the patients as they came only to collect their drugs—because of government regulation they can be given only a month’s supply and must see the doctor to have a new supply. The patients at the clinic were almost all women—because the men were working. Almost all doctors in Sri Lanka work see patients privately as well, and the rule is that those employed by the government can see private patients only after 4pm.

The government is well aware of problems with the system and has launched a reform of primary care, but Deepika Attygalle from the World Bank in Sri Lanka showed a figure of health expenditure in Sri Lanka with expenditure on tertiary care increasing rapidly and secondary care rising but that on primary care flat. The same story as Britain, I thought, although we know that the higher proportion spent on primary care the better outcomes and patient satisfaction and the lower costs.

Shanthi Mendis, a Sri Lankan who for many years was a senior adviser on NCD at the World Health Organisation, pointed out that Sri Lanka has many other priorities apart from hypertension, and the minister referred to the continuing problem of high levels of malnutrition in children. Mendis made a strong case, which several other policy makers repeated, for integrated health systems rather than more vertical programmes that concentrate on one health problem. She feared that unless policy integration is planned carefully a programme like COBRA could be counterproductive by drawing resources away other competing  health priorities, but she accepted that there might be a case for concentrating on one condition for research—to avoid unmanageable complexity. The reality seems to be that all those responsible for health systems recognise the need for integration, whereas research funders continue to fund programmes around one condition. 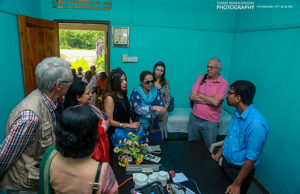 Jafar responded that she has always seen COBRA as a system that should be able to work for other conditions like diabetes and kidney disease, and as a model of care integrated into the existing health system (and not a vertical approach with parallel workforce and infrastructure). The proposals for scaling up COBRA are designed as such and include extending it to other conditions. And COBRA itself is constructed around the current health system in the three countries. When we visited the clinic we met three of the public health midwives, who were responsible solely for mother and child health, but now also monitor blood pressure and give lifestyle advice. They told us that it was more work, but they didn’t seem to mind: the capacity to measure blood pressure has raised their status, and they now visit many more homes. We were all struck that they were dressed in sparkling white dresses and white socks. It seemed like an impractical uniform when they must travel through muddy paths, on scooters and on foot, and they told us that their union, which is politically strong, has negotiated them being able to wear trousers rather than dresses. But they will continue, like all the schoolchildren I saw in Sri Lanka, to be dressed in white.

The forum also heard by Skype from Sania Nishtar, a cardiologist from Pakistan who has cochaired the WHO Independent High Level Commission on NCDs, who had just returned from the third high level meeting on NCD in New York. She said that she remained optimistic about progress being made with NCD despite quoting the Lancet that the world is currently “seriously off target” for achieving the goal of reducing deaths under 70 from NCD by 25% by 2025. Like Mendis she emphasised that need for integrated systems but also praised COBRA for being an evidence-based response to hypertension in rural areas. She saw how it could be extended to other NCD.

COBRA has enrolled 2643 patients with hypertension, and achieved follow-up rates above 90% at 18 months. A similarly high follow up rate is expected at 24 months, the end of the study period, and follow up should be complete by early next year. The study (which is funded by the Medical Research Council, the Wellcome Trust, and the Department for International Development) includes an economic evaluation and qualitative analyses and could have important implications for the management of hypertension in many low and middle income countries. But the challenge will be to scale up the programme and integrate it into routine primary care.

Competing interest: RS is a member of the Trial Steering Committee of COBPA-BPS and had his expenses paid to attend the meeting (at least, he hopes he will). He cochaired one of the sessions at the forum.