Last week I discussed the many different compounds that have a steroid skeleton at their core. However, in clinical parlance we use the term “steroids” to refer almost exclusively to the glucocorticosteroids [or glucocorticoids] that are secreted in the cortex of the adrenal gland and their semisynthetic derivatives, such as prednisolone and dexamethasone. If you want to use a mineralocorticoid you will generally name aldosterone specifically; if you want to use an anabolic steroid you will say “anabolic steroid”; and if you want to refer to any of the many other compounds that contain the steroid skeleton you refer to them by their other names.

The IndoEuropean root [S]KER is a confusing one, with many different meanings, giving rise to a multitude of unrelated words. For example, “scherzo” comes from the root [S]KER, which means to leap, and “curve” comes from a different root altogether, [S]KER, meaning to turn or bend. A lot of linguistic detective work has gone into teasing out these different meanings and their ramifications. The variant of [S]KER with which we are concerned here means to cut, scratch, dig, or separate. It is highly prolific.

The most basic derivatives come from Teutonic words. Shear means to cut, shears are scissors, and a ploughshare cuts the earth. Other cutting words include scrabble, scrap, scrape, scrub and shrub, sharp, and shred. A score was a notch that you cut into a piece of wood to keep tally, for example at cricket, and the number of runs thus came to be known as the score. A shepherd who counted in twenties might make a notch on his stick for every 20 sheep counted; “threescore” used to to mean 60, and “fourscore” meant 80, just as “quatre-vingt” in French still does. At one time the staves on a sheet of music showing different instrumental or vocal parts in parallel were connected by lines or “scores” to show their connectedness; hence a musical score (Figure 1). 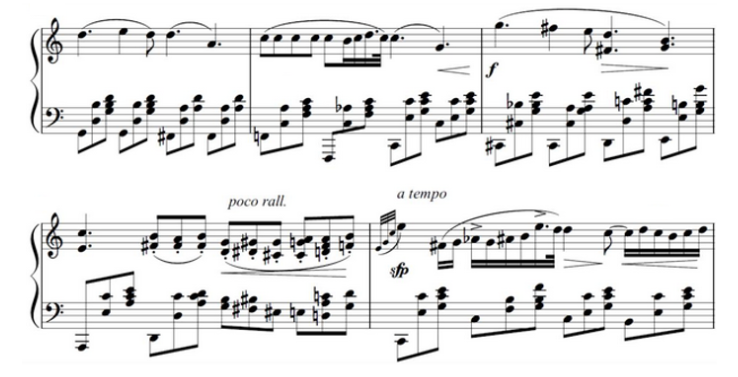 A scar results from a cut in the skin and when you scarify your lawn you make scores in the surface. A scar or scaur is an indentation in a hill and therefore a cliff, and a scarp is an embankment. A scabbard is a sword protector, from SKER + BERGH, the latter half of this compound word implying protection, giving us bury and burial. To skirmish is to fight with a sword, like a Scaramouch, and scrimmages and scrums are kinds of fight. A screen cuts things off from each other. The digging meaning of [S]KER gave scrofa in Latin, a sow, one that roots about or digs. Scrofula, a little pig, was the name given to swelling of piglets’ lymph nodes, later used to describe tuberculosis of the lymph nodes, also known as the King’s Evil; some plants in the Scrophulariaceae genus were supposed to be curative.

Reduce [S]KER to KER and you get a wide range of Greek and Latin words. For example, the Greek adjective κάρσιος meant [cut] crosswise. Adding the prefix ἐπι, giving a sense of motion, gave ἐπικάρσιος, which also meant crosswise, but often in the restricted sense of running at right angles, describing, for example, a striped garment, the planks of a ship, or a grid of streets. It was also used to describe coastlines, as opposed to paths running inwards perpendicular to the coast. And ἐπικάρσιος, after consonantal shift and elision, gives us bias.

In Latin KER gave caro, flesh cut from the bone, and carnalis, fleshly. Carrion is dead flesh, carnage involves cutting a lot of flesh, and a charnel house is where the dead bodies are piled up. A caruncle, a small piece of flesh, like a turkey’s wattle, also once meant a stricture.

Cortex in Latin is the bark of a tree, which can easily be cut off. At one time it was used to refer to any bark used medicinally. Peruvian bark, or Cortex Peruvianus as William Salmon called it, was the bark of species of Cinchona tree used as a febrifuge, also called Jesuits’ bark because they brought it back from the New World. Now we just use the quinine it contains.

Cortex then came to mean the external part of various structures in plants and animals, like the cortex of the brain, the kidneys, and the adrenal glands. Thus, the steroids secreted in the cortex are called corticosteroids (Figure 2). 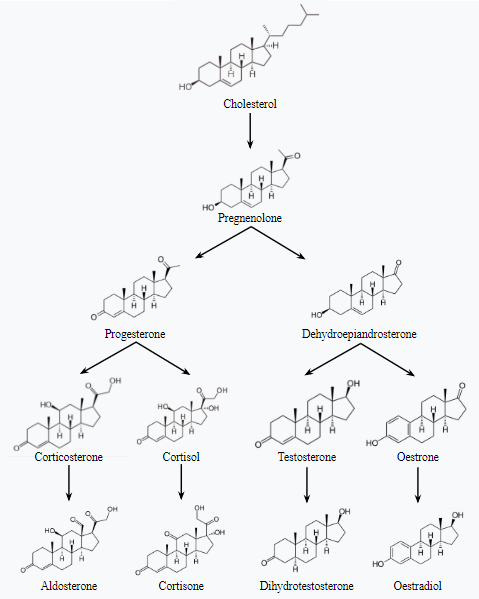 Figure 2. Synthesis from cholesterol of corticosteroids (mineralocorticoids and glucocorticoids) and sex hormones (oestrogens and androgens)

They are of two types, depending on their biochemical effects, glucocorticoids and mineralocorticoids. Together with the androgens, their sites of synthesis in the adrenal gland appropriately cut right across the cortex (Figure 3).