Last week I discussed the origins of the words “sterol” and “steroid”. Today we use the term “steroids” to refer almost exclusively to endogenous compounds that are secreted in the cortex of the adrenal gland and semisynthetic derivatives, such as prednisolone and dexamethasone. However, the term is also used to refer to other types of compound.

In 1936, in a paper in the Proceedings of the Royal Society of London, titled “Relations between optical rotatory power and constitution in the steroids”, Callow & Young wrote, “The term ‘steroids’ is proposed as generic name for the group of compounds comprising the sterols, bile acids, heart poisons, saponins and sex hormones” (Figure 1). 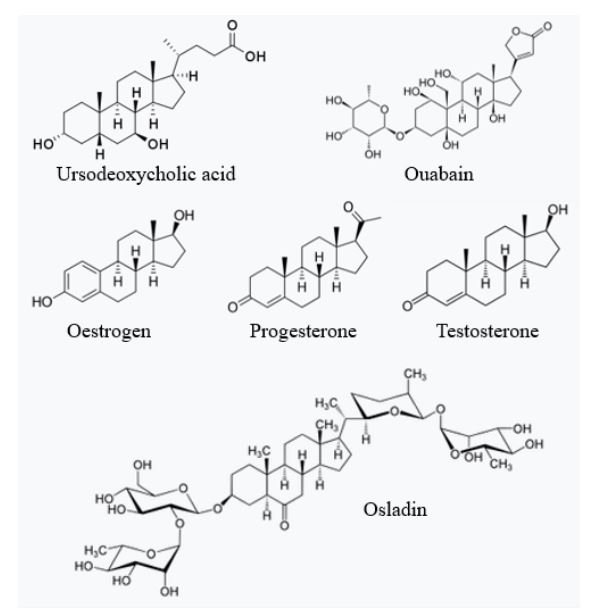 Figure 1. A range of different types of steroid molecules, each containing the four-ringed cyclopenta[a]phenanthrene skeleton; osladin is a steroid saponin, 500 times sweeter than sucrose; the differences in pharmacological actions arise from differences in substituents in the skeleton and the compounds’ three dimensional structures

The bile acids, also known as cholic acids, include ursodeoxycholic acid, used to treat gallstones. The IndoEuropean root GHEL meant bright, smooth, or shiny and gave rise to a gallimaufry of shiny words, including glare, glass, glaze, gleam, glimmer, glint, glitter, glitz, glow, gloss, glacial, glide, glissando, glib, gleet, glabrous and glabella, glaucous and glaucoma, gelid and gelatin, gold, gild, and guilder, yolk and yellow. From the Greek derivative χλωρός we get chlorine, chlorophyll, and chlorinated drugs, such as chloroform. Drop the rho from χλωρός and you get χόλος (later χολή), gall, bile, or anger, which makes you choleric and gives us cholic acids, cholesterol, and various bilious words, such as cholagogues, cholecystectomy, cholangiectasis, chloangiocarcinoma, and of course hepaticocholangiocholecystenterostomy.

The “heart poisons” on Callow & Young’s list are cardiac glycosides (i.e. steroids attached to saccharides of varying lengths), such as ouabain and digoxin, used to treat atrial fibrillation and cardiac failure, although much less so nowadays or not at all. Such compounds are rife in nature, and are found in a huge range of plants (Table 1). One incomplete list runs to nearly 400 compounds and spans genera such as the Apocynaceae, Asclepiadaceae, Cruciferae, Liliaceae, Moraceae, Ranunculaceae, and Scrophulariaceae. The IndoEuropean root DLKU meant sweet, giving us dulcet billet-doux, la dolce vita, and Dulcinea del Toboso, Don Quixote’s would-be sweetheart. The Greek derivative γλυκύς, sweet, gives us glycerol, glyceraldehyde, glycerine and nitroglycerine, glucose and glucoside, glycolysis and glycoside. 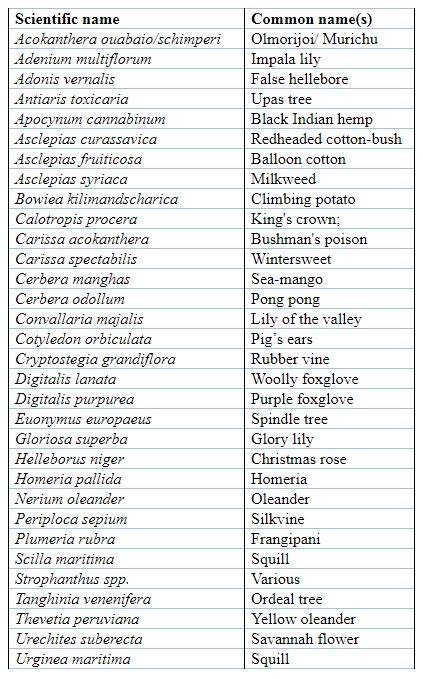 Some saponins are also steroid glycosides, and are also found in many plants. The IndoEuropean root SEIBH meant to drip or trickle, like the sap from a sapling or water seeping from a leaking siphon or through a fine sieve. Sapo in Latin originally meant a type of hair dye, but it later came to mean soap; hence saponins, which foam soapily in aqueous solution. Soapworts (genus Saponaria) were at one time used as soaps. As John Gerard wrote in his Herball (1597), “The stalkes of Sopewoort are slipperie”. William Salmon (Synopsis Medicinæ, 1671), claimed that soapwort was good for cuts, dropsy, and the stone. Mrs Grieve said it cures the itch and old venereal complaints. Other soapy plants include the soapbark (Quillaja saponaria) and the soapberry or soapnut (Sapindus saponaria or Acacia concinna).

The last item in Callow & Young’s 1936 list is sex hormones, which would have included one of the oestrogens, progesterone, and testosterone, all of which had been recently described. The IndoEuropean root ER, the simplest root imaginable, meant to move or set in motion. Teutonic derivatives give us arise, rise, raise, rear, and verbal forms of being, are and art. In Latin oriri meant to rise or come into being, giving us origins, the orient, and abortion. In Greek ὁρμᾶν, to start or set in motion, and ὁρμή, onset or impulse, gives us hormone, a word that was introduced by Ernest Henry Starling (propounder, with Otto Frank, of the Frank–Starling law), in a Croonian Lecture titled “The chemical correlation of the functions of the body”, given at the Royal College of Physicians of London on 20 June 1905. Hormesis, a term introduced by Chester Southam & John Ehrlich in 1943 (but see Figure 2), is a unusual biphasic pharmacological phenomenon, in which high concentrations of a substance, typically inhibitory, produce opposite effects to those produced by low concentrations, typically stimulatory. It has even been discussed in relation to female sex hormones. 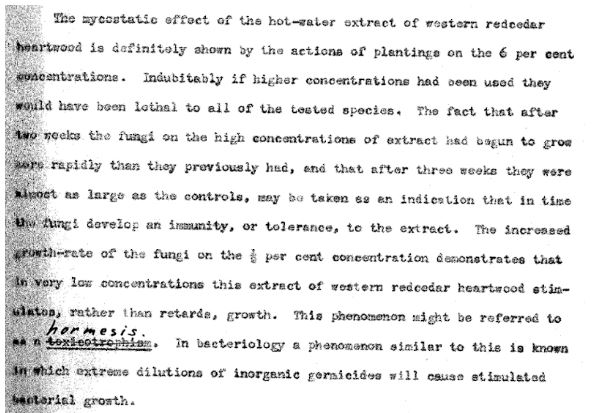 Figure 2. An extract (page 21) from Chester Southam’s 1941 undergraduate thesis, describing studies performed in the School of Forestry in the University of Idaho, and titled “A Study of the Saprogenicity, and Factors Influencing Decay, of Certain Brown-Rot Fungi on Western Redcedar Heartwood Test Blocks”; he originally used the word “toxicotrophism” to describe what we now call “hormesis”, but subsequently wrote the latter in its place; however, since we do not know the date of the amendment, we cannot be sure that this usage antedates the 1943 paper by Southam & Ehrlich (Phytopathology 1943; 33: 517–24)