The 2018 quadrennial meeting of IUPHAR, the International Union of Pharmacology and Clinical Pharmacology, prompted me last week to reflect on Japanese words that have entered our medical vocabulary, specifically those that involve reduplication. There are many more.

The OED contains nearly 700 words that mention Japanese in relation to etymology, the earliest from the late 16th century. “Japan”, for example, is first noted in 1577 and “Nippon” the Japanese word for Japan, in 1614. Unexpectedly, “Nippon” comes from the Chinese Jih-pŭn, which means “sun-rise” or “orient”. The name first reached Europe via Marco Polo.

About 250 of the words listed in the OED are specifically described as being “borrowing[s] from Japanese”. Figure 1 shows the frequency distribution of those words by decade. They arrived sporadically until the beginning of the 19th century, after which there was a slow increase until the period 1880–1910, when British interest in Japan was at its height, as witnessed, for example, by the success of Gilbert & Sullivan’s operetta The Mikado (1884), and culminating in the visit of the Crown Prince Fushimi Hiroyasu, who studied here from 1907 to 1910, although none of the sources I have consulted tell me what he studied. Since then there has been a relatively steady input. Most of the examples from the years 1614–17 come from Richard Cocks’s Diary in Japan (1615–22) and the 15 entries in 1727, including mikado, come from words first introduced in John Gaspar Scheuchzer’s English translation of Engelbert Kæmpfer’s History of Japan (1727), which contributes about 70 quotations in the dictionary. 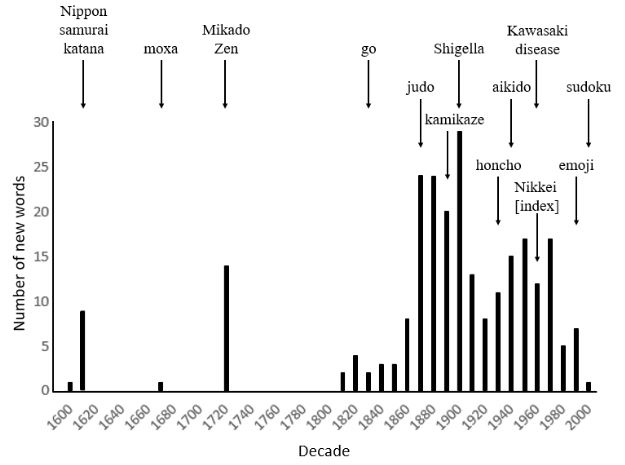 Figure 1. Frequency distribution of Japanese words that have entered English by decade (based on information in the Oxford English Dictionary); the most recent entry (2000) is “sudoku”

The isolated example from 1675 is “moxa”, found in Robert Hooke’s diary for 2 December: “Discoursed also of the new way of curing the gout by the China Moxa, that Moxa to be a spunk.” In the Micrographia, Hooke described “spunk” as “A kind of Jews-ear, or Mushroom, growing … on several sorts of Trees, such as Elders, Maples, Willows, etc.” Spunk nowadays means courage or spirit and is also a slang term for seminal fluid, by reference to virility; “mettle” has been used in a similar way. Sir William Temple described the use of moxa to treat gout in 1677 (published 1680), in an English translation of Herman Busschof’s 1674 essay. Moxa comes from the Japanese word mokusa, mugwort. Sydenham mentioned it in his Treatise on Gout and Dropsy (1683, §68), comparing it to Hippocrates’ ὠμολίνον, flax. Moxa is “a soft wool prepared with down from the young leaves of any of various Asiatic plants, especially Artemisia indica and Crossostephium artemisioides, used in the form of a cone or cylinder for burning on or next to the skin at one of the vital points of the body as a counterirritant, cauterizing agent, etc” (OED). Moxibustion is “the therapeutic practice of burning moxa or another substance on or next to the skin”, usually in conjunction with acupuncture.

Some medical terms come from the names of Japanese doctors, including Kawasaki disease and Shigella organisms, named after the Japanese bacteriologist K Shiga (1870–1957). Therapeutic plants also make appearances, including gingko and kombucha, a seaweed from which a supposedly therapeutic tea is made, although it can cause adverse reactions.

However, the Japanese word that is perhaps most prevalent in medicine is “samurai”, one of those that first appeared in English in 1727. The warrior class of samurai are well known in the west, particularly from movies such as Akira Kurosawa’s The Seven Samurai and Edward Zwick’s The Last Samurai, in which Tom Cruise plays an American military adviser who embraces the samurai culture. Others have nothing to do with Japan, or even samurai, such as Jean-Pierre Melville’s hitman movie Le Samouraï (1967).

Because samurai warriors are associated with the katana, the long single-edged sword, cellular mechanisms for severing microtubules and chromatids have been called cellular samurai, and the use of harmonic scalpels has been labelled the samurai technique. Four random amplified polymorphic DNAs in the domesticated silkworm Bombyx mori have been named W-Kabuki, W-Samurai, W-Kamikaze, and W-Yamato. And SAMURAI is a popular acronym, variously used to describe a Study of Active controlled Monotherapy Used for Rheumatoid Arthritis, an IL-6 inhibitor (tocilizumab), the Stroke Acute Management with Urgent Risk-factor Assessment and Improvement rt-PA Registry, the Suppression of Acid Milieu with Rabeprazole Improving Functional Dyspepsia study, and Sensitivity Analysis of a Meta-analysis with Unpublished but Registered Analytical Investigations (software). Banzai! 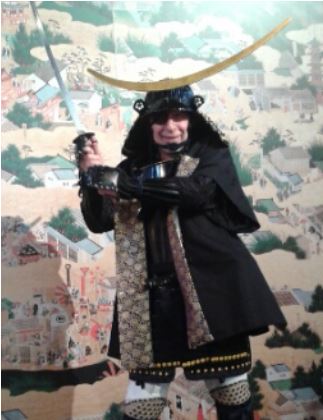 Figure 2. A portrait of the artist as a samurai warrior brandishing his katana