The National Institute for Health Research (NIHR) is highlighting seven research legends whose work has shaped the NHS, as part of its celebrations for the NHS’s 70th birthday and the NIHR’s I Am Research campaign.This entry looks at Iain Chalmers, who’s helped meet the information needs of patients and clinicians more effectively. 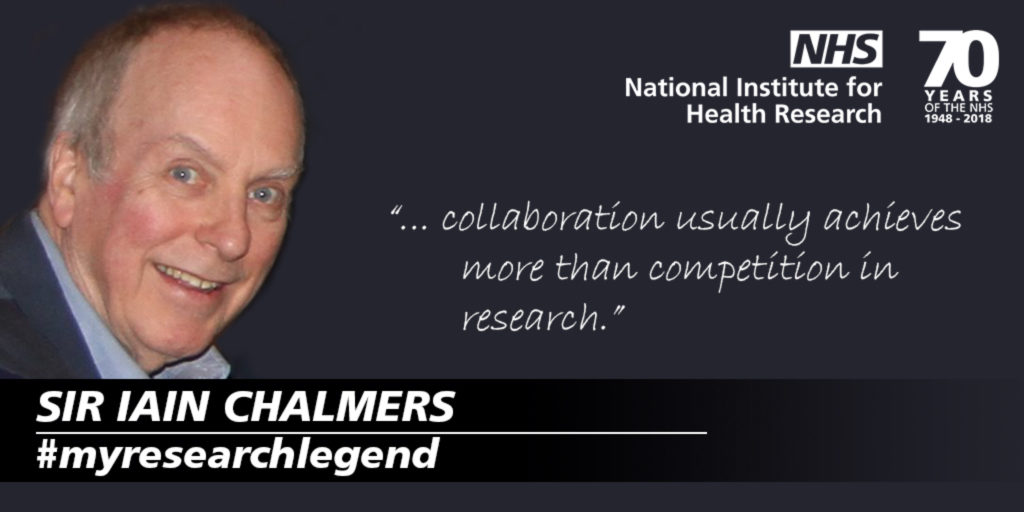 Every few months I have a coffee with Sir Iain Chalmers, that’s Iain to you and me, where we discuss developments in evidence based medicine and consider nuggets of information that have profoundly impacted NHS healthcare.

At our meetings Iain always has a Palestinian flag on his lapel—I’ve never seen him without it. After house jobs, Iain worked for the United Nations in a Palestinian refugee camp in Gaza. Listening to Iain, it’s evident that working there had a profound impact on his future.

While in Gaza, Iain applied his medical school teaching, which had taught him not to treat children with measles with antibiotics. Later, however, he learnt that six controlled trials had been done before he started work in Gaza (the first of these was done in 1939) showing that antibiotics for measles could reduce children’s risk of developing pneumonia. As a consequence of not having this evidence to hand, many children suffered unnecessarily. This was a key moment of realisation of the significance of having accessible research evidence.

Following on from this, in the 1970s, Iain became director of the National Perinatal Epidemiology Unit (NPEU), which sowed the seeds for the development of the Cochrane Collaboration. Under his directorship, the NPEU published the Classified Bibliography of Controlled Trials in Perinatal Medicine, set up the Database of Perinatal Trials, and developed methods for synthesising trial results that led to the basis for systematic reviews and the birth of the UK Cochrane centre.

A 1992 BMJ editorial (a must read by the way) invited investigators to contact the Cochrane Centre to collaborate on developing the register of controlled trials and dealing with the problem of unpublished trials.

What happened next is astonishing: from a small meeting of 77 likeminded folk from 11 countries who met in Oxford in 1993 (watch the video here), Cochrane has grown to include over 31 000 contributors from over 130 countries, producing more than 7000 Cochrane systematic reviews. These reviews are accessible, free from commercial sponsorship, and inform many aspects of NHS care.

Systematic reviews aim to find all the relevant evidence for a specific clinical question, appraise the quality of that evidence, and provide a summary estimate of the results. For treatment effects, the evidence used in reviews generally comes from randomised controlled trials. Nowadays, it is inconceivable to consider that treatment decisions would be based on anything other than evidence from systematic reviews.

Over our last coffee, Iain told me he’s about to retire. What! Not allowed. Not when he’s working on another epic idea: teaching school children, among others, the skills required to make informed health choices. Patients and the public need to be equipped to assess the trustworthiness of treatment claims, but teaching the next generation to make better choices based on evidence, become active participants in their own health decisions, and actively self-care could ensure that the next 70 years in the NHS are as exciting and productive as the first 70.

I could have talked to you about Iain’s other contributions to evidence based medicine initiatives: the James Lind Library; Testing Treatments Interactive; his preoccupation with bias (another must read paper: evidence of bias); or his attempts to eradicate publication bias and reduce waste in research—work on which the NIHR’s approach to Adding Value in Research is based. But, I’ll leave it to you to find out more.

Persistence, passion, and a career obsessed for nearly 50 years with “the need to meet the research information needs of patients and clinicians more effectively” has transformed healthcare for the better. I think it’s time for another coffee.

Carl Heneghan is a clinical epidemiologist and leading expert in evidence based medicine (EBM), research methods, and regulatory science. He has extensive experience in systematic reviews and is director of the NIHR SPCR Evidence Synthesis Working Group, a collaboration of nine UK primary care departments. He led the Tamiflu systematic reviews. His work includes investigating drug and devices, advising governments on regulatory evidence, and healthcare projects in the public interest. He is editor in chief of BMJ Evidence-Based Medicine.

Competing interests: CH has received expenses and fees for his media work, including BBC Inside Health. He holds grant funding from the NIHR, the NIHR School of Primary Care Research, the Wellcome Trust, and the WHO. CEBM jointly runs the EvidenceLive conference with The BMJ and the Preventing Overdiagnosis conference with international partners, based on a non-profit model. He is editor in chief of BMJ Evidence-Based Medicine.

The views and opinions expressed in this article are those of the authors and do not necessarily reflect those of the NIHR, NHS, or the Department of Health and Social Care.