While we are talking about differences between British and American English, let me ask you this: when you discuss mixed function oxidases, now known as CYPs, as I’m sure all my readers often do, do you think their function is to oxidise or oxidize? Well, contrary to common belief in the UK, the appropriate English spelling, American and British, is with –ize, rather than –ise.

Many words ending in –ize originally derived from Greek verbs ending in –ίζειν (–izein), a suffix that was added to a noun to create a verbal infinitive, either transitive (meaning “to make or conform to, or treat in the way of, the thing expressed by the derivation”, for example anatomize) or intransitive (“to act some person or character, do or follow some practice”, for example philosophize).

Although Greek had zeta (ζ), the letter zed was not a common feature in classical Latin. It did occur, but usually only in words transliterated from Greek (for example zaeus, zamia, zea, zelo, zingiberi, ziziphum, zodiacus, zona, zoophthalmon, zoster) or Persian (azania, azymus, gizeria, maza, mazonomum, ozaena, pezica, rhizias, rizagra). However, in the 3rd century AD Latin introduced the suffix –izare to turn nouns into verbs, usually transitive ones (meaning “to make [that which is expressed by the derivation]”, for example immortalize, to make immortal).

So English words that derive from Greek and Latin should be spelled with –ize, appropriate to etymology and pronunciation. Likewise, for consistency, verbs derived from nouns from other languages. This includes verbs formed from proper names (such as mesmerize and Americanize) and from names of chemical compounds (such as atropinize, curarize, digitalize, and oxidize).

So why can these words be spelt with –ise instead of –ize? Well blame the French—they changed the Latin –izare to –iser. The Italians (–izzare) and the Spanish and Portuguese (–izar) retained the zed. Of course, English wouldn’t be English if there weren’t some words ending in –ize that can’t be spelt –ise: assize, capsize, prize, seize, and size. The exceptions to the –ize rule are listed in Table 1, which also shows the etymological reasons. Note that none is from Greek and that they mostly derive from verbs, rather than nouns. They just happen to end in –ise. 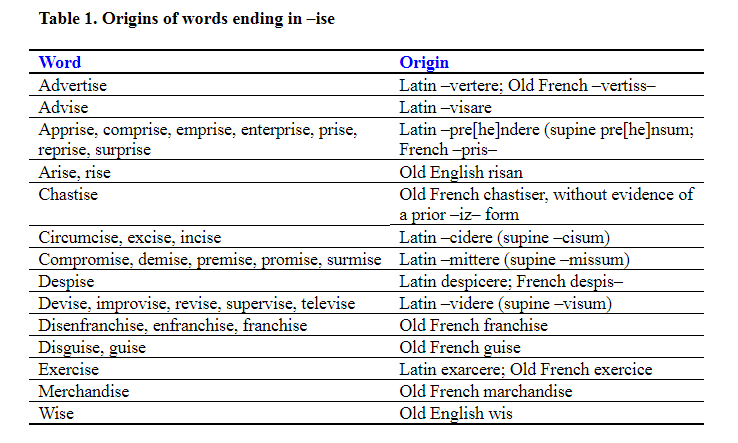 So how often do people use the different forms? Well, when I looked for oxidize and oxidise as textwords in Pubmed there were 91077 versus 5127 citations, i.e. 95% in favour of –ize (see Table 2). In contrast, nouns that end in –lysis should form verbs ending in –lyse, but –lyze is often seen. The PubMed occurrences of –lyse/–lyze words (ana–, auto–, bacterio–, cata–, cyto–, dia–, electro–, h(a)emato–, h(a)emo–, histo–, hydro–, leukocyto–, neuro–, para–, photo–, plasmo–, proteo–, radio–, thermo–, zymo–, and lyse itself) are given in Table 2, showing a surprisingly even distribution between the two forms.

In Modern English Usage (1926) Fowler made it clear that he favoured the etymologically appropriate form –ize: “The difficulty of remembering which [the] –ise verbs are is in fact the only reason for making –ise universal, and the sacrifice of significance to ease does not seem justified.” In the 1965 edition, Ernest Gowers left that statement unchanged. And Eric Partridge in Usage and Abusage (1972) was unequivocal: “Use –IZE.” In contrast, Robert Burchfield in The New Fowler’s Modern English Usage (1996) wrote, “The matter remains delicately balanced but unresolved. The primary rule is that all words of the type authorize/authorise, civilize/civilise, legalize/legalise may legitimately be spelt with either –ize or –ise throughout the English speaking world except in America, where –ize is compulsory”. In Fowler’s Dictionary of Modern English Usage (2015), Jeremy Butterfield left out the first of Burchfield’s sentences that I have quoted, but left the second, apart from changing “compulsory” to “always used”. Burchfield’s typically non-judgmental opinions on such matters reflected current usage, and presumably –ize and –ise were equally represented in his database. However, he was not very scientifically aware, and the PubMed evidence suggests that in the bioscience literature –ize predominates worldwide.

As the Oxford English Dictionary puts it, “There is no reason why in English the special French spelling should be followed, in opposition to that which is at once etymological and phonetic.”

In other words, the –ize have it.