Amerilexicophobia, the fear, dislike, or even hatred of linguistic Americanisms, has two main targets: spelling, one particular aspect of which I discussed last week, and words and terms whose meanings and uses differ between American English (AmE) and British English (BrE), of which Table 1 gives examples. A third target, pronunciation, is perhaps less often vilified.

Table 1. Some words and phrases that are used in AmE and BrE to mean [roughly] the same thing 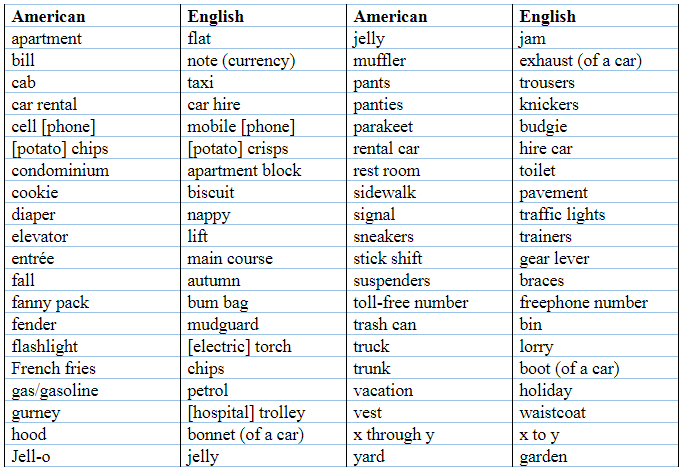 In some cases the same thing is described using two different words. Not infrequently in such cases, the American word is in fact an old English word that has fallen into disuse in BrE. For example, “fall” was commonly used in BrE in the 16th century, rather than “autumn”, or the even earlier “harvest”, but “autumn” became more commonly used by the end of the 17th century. The Americans fell for “fall”; it was we, not they, who changed.

Similarly, “sidewalk” and “pavement”, both meaning the footpath beside the road, co-existed in BrE in the 18th century. Before that, “pavement” meant the paved roadway, and it is in that sense that it is found in AmE.

“Diaper” in BrE meant a piece of cloth long before it became a baby’s nappy in AmE.

“Truck” was used in BrE in the 18th century to mean a wheeled vehicle for carrying heavy weights; lorry didn’t appear until the 19th century.

In Scotland, as the Oxford English Dictionary attests, with examples mainly from the 18th and 19th centuries, a “cookie” was a plain bun, but in America it typically refers to what we call a biscuit in the UK, although US dictionaries define it as a small flat or slightly raised cake.

In other cases the same word is used to mean two different things entirely. For example, on a recent trip to California I heard of an English colleague who asked for chips with her burger and was surprised when it came with potato crisps; of course, she knew that she should have asked for French fries, but forgot. Some years ago, when France and America disagreed over invading Iraq, the Republican senator Bob Ney, from Ohio, who was chairman of the House Administration Committee, ordered that the word “French” should be removed from all menus in restaurants on Capitol Hill; French fries were called “freedom fries” and French toast “freedom toast”. Others thought that the whole business was “small potatoes”.

When you want to erase a pencil mark you probably use a rubber (BrE) or an eraser (AmE); in America, “a rubber” can also mean a condom, like the outdated “rubber johnny” in BrE.

Drug names also differ. In 1995 the UK’s Medicines Control Agency announced its intention to implement changes required by a 1992 directive of the European Community, decreeing that in member countries the recommended International Non­proprietary Name (INN) should be used exclusively. At that time drug names in the UK were British Approved Names (BANs), not all of which were also INNs; the switch meant that some drug names had to change, in some cases to names that also happened to be United States Adopted Names (USANs). Some thought this unnecessary, and some may have regarded the move as a wholesale abandonment of British Approved Names in favour of American ones. However, although some of the INNs that replaced BANs also happened to be USANs, there were several opposite cases. For example, the BAN “paracetamol” is also the INN; it is the Americans who have stuck out for “acetaminophen”. Other examples are listed in Table 2. There are two exceptions to the exclusive use of INNs in the UK: the BANs adrenaline and noradrenaline (INNs and USANs epinephrine and norepinephrine). When the drug names were being changed, I successfully argued that we should retain the BANs in these cases, based on history, etymology, and usage, and most importantly because of the risks of harms to patients.

Of course, the BrE/AmE  traffic goes both ways, and the exchange enriches both languages. In her book The Prodigal Tongue (Oneworld, 2018), Lynne Murphy mentions several words and expressions of British origin that the Americans have adopted, and some American words, and words from other countries, that they mistakenly regard as being of British origin. In fact, we are getting closer all the time. Remember, for example, that there was a time when the British may have paid the bill with a cheque, while the Americans paid the check with bills. Nowadays we all pay with plastic.