Baroness Dido Harding (pictured), the chair of NHS Improvement, is the latest in a series of high achieving business people brought in to improve the NHS, and last week she described to the Cambridge Health Network the formidable challenges she faces. 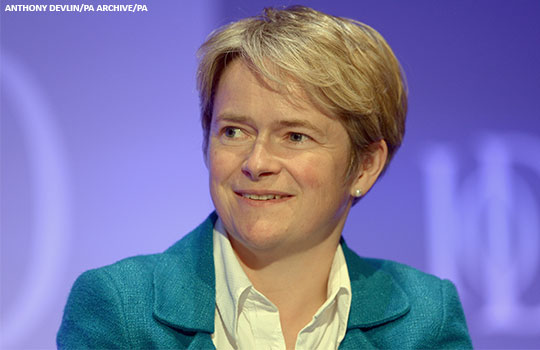 Harding spent 20 years in retail, working for Tescos and Sainsburys, before running TalkTalk Telecom Group for seven years until 2017. She now sits in the House of Lords as a Conservative peer, and she’s a non-executive of the Bank of England. She was also for 20 years a jockey and steeplechaser and spoke several times of “my friend Tony McCoy,” one of the greatest jockeys ever.

Relaxed and confident, speaking with only the briefest notes, Harding started by saying that she had six months’ experience of the NHS while there must be well over a thousand years in the audience. (In fact, at a rough calculation there was probably more than 4000 years.) Her learning curve, she said, was vertical.

Harding keeps three things in her mind all the time, the first being that the NHS is the greatest health system in the world. Some, including me, rebelled at this, but her broader point was that you can’t improve a system by talking it down. Despite her first belief she also believes that it could be so much better: a 10 minute experience with the NHS tells you that, she said. She saw no incompatibility between the two beliefs, insisting that the best organisations and people never gave up trying to improve. She described how McCoy, by far away the best jockey of his generation, went home after every race and watched the race on television, searching for a chance to improve. Thirdly, she believes it will be necessary to spend more on the NHS, but the need for increased expenditure is the result of success, keeping people alive for longer.

Improvement, she believes, depends on collaboration at “every level.” It also depends, crucially, on people and leadership. And collaboration must begin at the top—between NHS Improvement and NHS England—“I and E,” as she and others call them.

Harding and Ian Dalton, the chief executive of NHS Improvement, are “starting from scratch” in defining the role of NHS Improvement. It is impossible for NHS Improvement and NHS England to merge, and so they operate in business terms like a joint venture. The “competition bits” have to be kept separate, but they look to work together wherever possible. In particular, they are creating a joint regional structure with the philosophy of the regions doing as much as possible.

But what can you actually do, Harding has asked herself, to improve a service of 1.3 million people with 1300 people?

Her first answer is through people and leadership. People are 75% of the costs of the NHS, and yet, she has observed, the NHS lacks systematic people management. NHS Improvement appoints the chairs of boards and she wants there to be more rigour in the process. The people in the audience with 4000 years of experience couldn’t help reflecting that “leadership” has been the answer to improving the NHS for a long time with various attempts to improve it. Remember, for example, the NHS University, and there is now the NHS Leadership Academy. Nevertheless, few in the audience dissented from the view that leadership is essential for improvement.

Harding’s second lever is process improvement based on data analysis. This too has a long history in the NHS, but the problem is, Harding acknowledged, to get it to scale.

Harding was very clear that you can’t get something like the NHS to improve without the professionals, particularly doctors, wanting it to happen and supporting change. Although she has not worked in healthcare, she did in her work in telecoms work with many engineers—and she thinks that there are parallels with doctors in them being highly trained professionals.

Another route to improvement is through technology, which she described as being socially and morally neutral: it can be used for good or ill. She was blunt that currently NHS Improvement is “not present on the pitch” when it comes to technology.

The NHS, Harding observed, is a very obedient sector, and incentives can be powerful levers for improvement. These have to be set jointly with NHS England, and she said that “no incentive is perfect.” She worries that the “capital to revenue switch,” destroying the seedcorn, is one of the NHS’s biggest problems. She is confident that more money will be forthcoming for the NHS, and her biggest worry is not that it won’t come but that it will be squandered when it does.

Her sixth lever for improvement was “performance management,” which she notices is a dirty phrase within the NHS. She thinks it important and a positive rather than a negative activity and is trying to find a phrase that the NHS will find acceptable—perhaps “performance coaching.”

The last tool is reconfiguration, but she was very clear that this had to be driven locally with much talking and preferably clinical leadership. The future is “not drawing a map in Whitehall.”

Somebody in the audience urged her not to try to do too much but rather to try and ensure that she succeeded at a few things. She accepted that one of her weaknesses was trying to do too much at once and was grateful for the advice. The mood of the audience was very much to support her and wish her well, hoping that she would be a business person who could bring real benefits to the NHS.

Competing interest: RS is an NHS patient and has no private insurance and has never had. He was a member of the Labour Party’s Independent Commission on Whole Person Care. Until 2015 he was employed by the UnitedHealth Group, which has customers in the NHS, although he had nothing to do with the business side of the company from 2007. He still has shares in the company. He is also the chair of the board of Patients Know Best, which has customers in the NHS. He is unpaid but has some equity. He also acts as a consultant to Medial EarlySign, an Israeli artificial intelligence company that hopes to develop customers in the NHS.