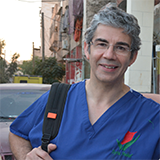 The Syrian Civil War has passed its seventh anniversary. What started as a peaceful demonstration in March 2011 has ended up being one of the biggest failures of standards of humanity that we have witnessed in modern times.

Among the dead in a protest in the southern city of Daraa in 2011 was Dr Ali al-Mahameed, a cardiologist, who was shot in the head and the chest as he tried to reach the wounded. Thousands of people attended his funeral later that day and they too were attacked with live ammunition. As the protests erupted all over the country and more of the demonstrators required hospitalisation, their admission details were passed to the security and intelligence services.  I was working for Medecins sans Frontieres in Syria in 2012 and heard many witness statements cataloguing the inhumane treatment of patients taken to government hospitals where the intelligence services would take the wounded from hospital beds and even from operating theatres where they would be interrogated, tortured, and killed. A special report produced by MSF at the time concluded that for Syrians who opposed President Assad, the healthcare system had become “a weapon of persecution.”

In January 2012,  Assad promised in a public address to crush what he called “terrorism” with an “iron fist”. Indeed, in the first year of the uprising, Physicians for Human Rights documented 56 cases of medical workers being killed either by government snipers, or murdered by security agents at their clinics. Those taken for questioning were often tortured to death in detention facilities.  In July 2012, the regime enacted a new terrorism law, making it an offence to fail to report anti-government activity; according to a UN Commission this effectively criminalised medical aid to the opposition. In effect, if you were not with the regime you were a terrorist and therefore a legitimate target.

Also in July 2012, the International Committee of the Red Cross proclaimed the Syrian conflict a Civil War. This was an important proclamation as it meant that international humanitarian law now applied throughout the country. The Geneva Conventions and their additional protocols, contain the most important rules limiting the barbarity of war. These rules apply to the treatment of people who are not participating in the fighting, civilians, healthcare workers, and aid workers as well as the wounded, sick, and prisoners of war.  In the 1949 Geneva Convention, common article 3 relates to grave breaches of this law which includes wilful killing, torture, or inhumane treatment, including biological experiments, wilfully causing great suffering or serious injury and wanton, unlawful extensive destruction and appropriation of property not justified by military necessity, all of which constitute a war crime and can be indicted in a court of law.

By the end of 2012, Syrian government forces had attacked medical establishments at least 89 times in eight provinces. Near Damascus, security forces entered three hospitals and killed all the patients and staff in cold blood. In Homs, a field hospital was shelled 20 times in two days. In Aleppo, military aircraft completely destroyed  the Children’s Hospital and attempted to destroy all the other well known hospitals in the city. This necessitated the construction of secret field hospitals given secret names to try to continue treating the wounded. In 1953, Syria signed the Geneva conventions and fully understood the implications of breaches of humanitarian law. It then follows that by the end of 2012, the first red line was crossed.

On 20 August 2012, speaking at an impromptu news conference at the White House, President Obama noted that he had not authorised military operations against Syria, but said that any effort by President Assad to use chemical weapons would have significant consequences. “We have been very clear to the Assad regime, but also to other players on the ground, that a red line for us is we start seeing a whole bunch of chemical weapons moving around or being utilised. That would change my calculus, that would change my equation”. He warned that Assad would be held accountable by the international community if he deployed chemical munitions.

On 21 August  2013, the Syrian government used rocket launchers to propel sarin gas into a suburb of Eastern Ghouta killing nearly 1,500 civilians including at least 426 children according to US assessments. The international community was in uproar and this prompted the British government to obtain legal advice by the British attorney general who confirmed that military action would be lawful under the doctrine of humanitarian intervention. However, over a week later the British Parliament ruled out any military action against Syria by 272 votes to 285.  This appeared to influence Obama’s decision not to follow through his threat of military action.

So a second red line had been crossed and nothing had been done about it.

Three days later I crossed the border from Turkey into Syria and spent the next six weeks in East Aleppo as a surgeon working with the British charity Syria Relief. There were posters in the streets for public information on what to do if a chemical weapon attack was deemed imminent. Gas masks were distributed and tents for decontamination were set up around the city. Many of the surgeons that were still in Aleppo were young and inexperienced and I spent a lot of my time teaching the surgeons how to deal with the effects of gunshot wounds and fragmentation injuries. There was so much surgery to be done and so many casualties that it was a race against time to try and get as many of the surgeons up to speed as possible. I would be driven round the city from hospital to hospital, operating in all the operating theatres of all the hospitals that were still functioning. Night time drives would be in the pitch blackness of night with the occasional flash of  headlights, so that we would not be targeted by the snipers or Syrian air forces flying the skies. Another British surgeon who had worked in Aleppo, Abbas Khan, was at that time in a prison in Damascus having been captured by the Syrian regime after wandering into a government checkpoint. He died in prison on 16 December 2013, his death at the hands of the Syrian regime was deemed unlawful and British court proceedings against the Syrian regime are ongoing.

When I returned to to Aleppo in 2014 the situation was fairly dire with helicopters dropping barrel bombs indiscriminately on civilian areas. Most of the injuries were families of young children with their mothers as the bombs dropped on residential areas. One of the secret hospitals in which I had worked in 2013, M10, was now underground as the hospital which had been above ground had been targeted with rockets from warplanes and many barrel bombs had been dropped all around it by helicopters.  I was shown around what remained of the wards which housed many of my patients in 2013, the empty beds surrounded by mangled machinery, dried blood still on some of the bedsheets.

The fact that M10 was underground did nothing for the morale of the patients. One day, a barrel bomb landed a few metres from the hospital and suddenly the hospital was full of concrete dust.  The noise was thunderous and many of the patients panicked and decided to leave because it was felt that being in a hospital was probably the most dangerous place to be as they were always being targeted.  At the time Aleppo was probably the most dangerous city in the world to be and we would often wait for the helicopters to disappear before leaving to go from one hospital to another and then make the rapid dash in the car.  While I was there five of my colleagues died simply going from one hospital to another to help with operations.

By 2015 I had set up the charity the David Nott Foundation with my wife Elly to pay for surgeons from all over the world to come to London to get training on a course that I have developed at the Royal College of Surgeons called Surgical Training for Austere Environments. This course runs twice a year and we have at least 12 surgical scholars per course which are paid for by the Foundation. A satellite course called the Hostile Environment Surgical Training course takes surgical training for conflict and catastrophe zones to the field. In 2015 and 2016 we ran two courses in Gaziantep for Syrian surgeons who had come over the Turkish border. Over those courses, we trained 60 Syrian surgeons from all over the north of Syria. In 2016, one of the surgeons Dr Hassan al-Araj left his underground hospital in Hama to come to the course, but was tragically killed by an air strike en route.

The vacuum left by the West was filled by the Russians in 2015 which only increased the suffering the Syrian people. The suffering of the civilians in Aleppo became significantly worse in 2016 after the only road into and out of the eastern part was finally taken by the regime and Aleppo was put under siege. The constant bombardment of the city by Russian and Syrian warplanes was horrifying for us all to watch on our television screens.

Since 2011, there have been over 520 strikes against medical facilities in Syria and over 780 medical staff have been killed. Since the start of this year there have been over 60 attacks on medical establishments.  The suffering across the country has reached unprecedented levels, with access to medical aid constantly used as a weapon of war. Even at the start of March, the only UN convoy to be allowed into Eastern Ghouta, had its medical supplies removed including surgical kits, insulin, dialysis equipment and other supplies from reaching the enclave where 400,000 people were still living.

It appears that every red line that can be crossed has been crossed in this war. With over 500,000 people killed and 13 million people in need of humanitarian aid there appears to be no end in sight for the people of Syria. Apart from the complete disregard for the sanctity of human rights in war, hospitals and medical staff continue to be targeted as well as the civilian population. Chemical weapons seem to have become the new norm with further sarin attacks and abundance of chlorine gas attacks. It has been estimated that there has been over 117 chemical attacks over the last 5 years. The UN Security Council appears incapable of fulfilling the commitment which it was set up for: ‘to establish conditions under which justice, a respect for the obligations arising from treaties and other sources of international law can be maintained’. With the constant vetoes from permanent members Russia and China nothing can be achieved. It seems unlikely that those who have committed war crimes, including individuals in Russia and Syria, will never be sent to The Hague.

Eastern Ghouta will no doubt shortly be under regime control and many of the civilians and other armed operating groups have been evacuated to Idlib as had the remaining civilians from East Aleppo. Idlib has been deemed a de-escalation zone by the Russians and the Syrians, as had Eastern Ghouta, and we all know what happened there. Over the next year or two there will likely be a further bloodbath when this area of northwest Syria will be bombed and thousands of people will continue to die.