Last week I discussed the concept of teleoanalysis, in which different types of evidence from disparate sources are analysed either simultaneously or sequentially. To be clear, the term implies not the very last analysis that could be done, but a thorough systematic analysis of all the evidence available at the time, from, for example, randomised trials, non-randomised studies, epidemiological studies, n-of-1 studies, case reports, and any other forms of adducible evidence, such as laboratory evidence and mechanistic arguments. Teleoanalysis can be a quantitative analysis of quantitative data or, if the data do not lend themselves to formal analysis, a narrative account. Furthermore, the results of qualitative studies can be used as an adjunct to a quantitative teleoanalysis or as part of a narrative teleoanalysis, aiding interpretation. If other evidence becomes available, it can be included in a revised teleoanalysis.

This concept reminds us that it is fallacious to think of evidence as being arrayed in hierarchies, based on the idea that some forms of evidence are intrinsically more reliable than others. The first hierarchies put systematic reviews of randomised controlled trials at the top (high quality) and anecdotal reports and expert opinion (wrongly categorised—opinion is not evidence) at the bottom (low quality). However, it has gradually been recognised that different types of evidence have different uses and that in some circumstances the varieties in the middle of the list or at the bottom may have as much value as those at the top. Hierarchies distort this.

Randomised studies, it is generally agreed, provide the most convincing quantitative evidence. Controlled n-of-1 studies, in which the effects of an intervention are studied in an individual and compared with a placebo or other comparator, can give excellent evidence in the individual. However, such designs have limitations. For example, the results of a randomised study may not be applicable to the general population (the problem of external validity) and are not good at detecting rare events; n-of-1 studies are applicable only in some conditions.

Sometimes even an anecdotal report can elucidate a beneficial or harmful effect without the need for a randomised study. A whimsical example of this is the anecdotal evidence, in the absence of randomised studies, that parachutes “[prevent] death and major trauma related to gravitational challenge”. Other examples show that anecdotes can provide convincing evidence of both benefits and harms without the need for randomised or observational studies.

Similar comments could be made about other types of evidence, mechanism based, laboratory based, and qualitative evidence, each of which has a place in the evidence spectrum.

The word “teleoanalysis” comes from the Greek adjective τέλεος, itself derived from an IndoEuropean root KWEL, which implied different forms of turning, as I discussed last week. This suggests depicting different forms of evidence and their interrelations as a wheel, with no predominant class. Recognising that all forms of evidence can be of value in different ways emphasises the fallacy of hierarchies and suggests a different way of thinking about how evidence should be analysed. This is illustrated and described in the figure below. 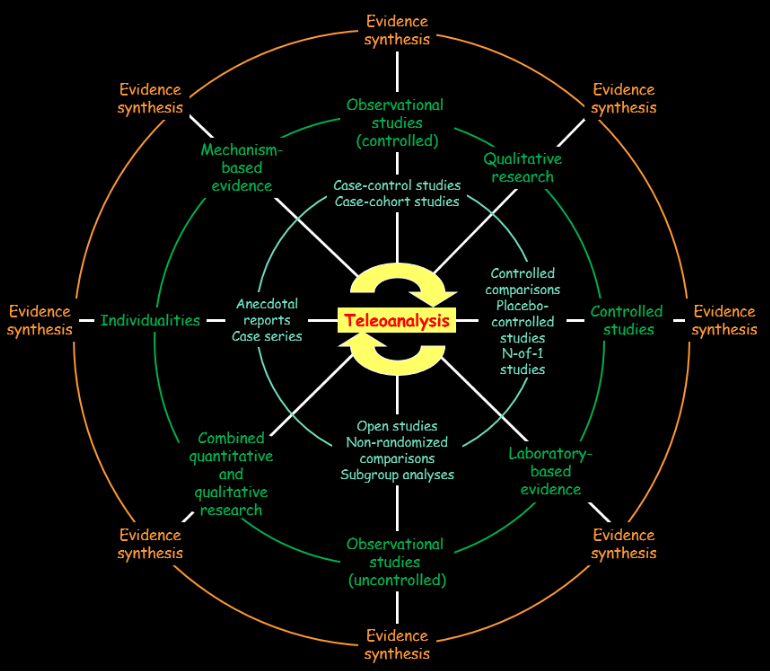 Teleoanalysis and the wheel of evidence.

The green ring shows the different classes of evidence and the blue ring shows some of the types of studies that they comprise:

The outer orange ring indicates that any of these types of evidence can be subject to systematic evidence synthesis, for example by meta-analysis, and the inner yellow ring suggest that teleoanalysis can encompass any or all of the different types of evidence illustrated, either simultaneously or sequentially.