In 2011 the United Nations held a high level meeting on preventing and controlling non-communicable disease (NCD) and produced a declaration on what countries should do. In 2018 it will hold another meeting to review progress, and unless there is a dramatic acceleration the meeting is likely to conclude that progress has been poor, said Nick Banatvala, senior adviser to the UN Interagency Task Force on the Prevention and Control of NCD [hereafter called the Task Force], at a C3 breakfast seminar before Christmas.

NCDs were not included in the Millennium Development Goals, but are explicitly mentioned in number 3 of the 17 Sustainable Development Goals. The overall target is to reduce deaths under 70 caused by NCD by 30% by 2030, but NCD links to many of the other goals, as the figure below shows. The UN, said Banatvala, is now thinking beyond the traditional four diseases (cardiovascular disease, diabetes, cancer, and chronic lung) to include mental health, injuries, and environmental pollution. 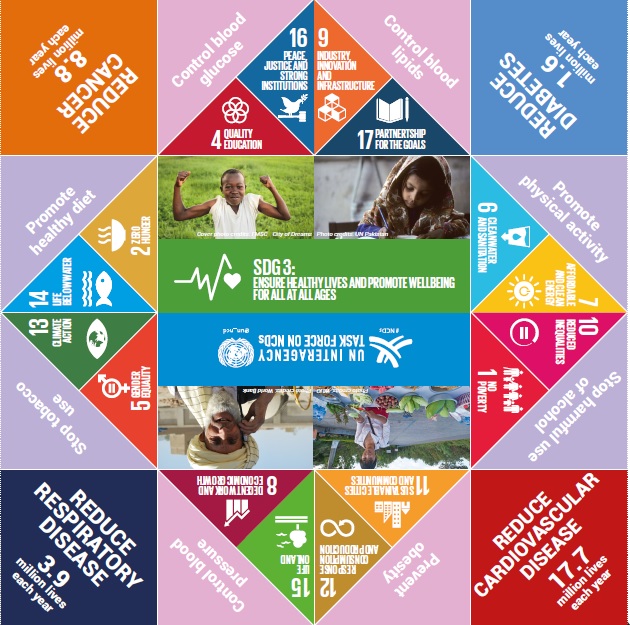 The Task Force was established by the Economic and Social Council (ECOSOC) of the UN and reports to the council. It has some 40 members, including not only the World Health Organization (WHO), UNICEF, and United Nations Development Programme (UNDP) but also the World Bank. Managing conflict of interest is a challenge for the Task Force as different UN agencies have different interests and connections—for example, WHO won’t work in any way with the tobacco industry, whereas the International Labour Organisation has links with the industry.

The Task Force works mainly at country level and aims to encourage and support countries in their programme to present and control NCD. Much that needs to be done to prevent and control NCD depends on government departments other than health—and on NGOs, academia, and the private sector. So when the Task Force visits countries it hopes to meet with heads of state, other ministers—including finance and labour—and representatives of NGOs, academia, and the private sector.

Indeed, the Task Force concentrates a lot of its argument on finance. All countries are experiencing an increase in NCD, but while a country like the US, where NCD rates are already high, will experience a relatively small proportionate increase, countries like Ethiopia, where rates are currently low, will experience an exponential increase. Investing now in the 60 “best buys” identified by WHO for preventing and controlling NCD (things like increasing tax on tobacco and alcohol) can slow the increase and, argues the Task Force, produce a dramatic return on investment. When the Task Force visits a country it goes armed with figures on the cost of the rise in the NCDs and on the return of investment that can be expected from various interventions.

Despite the importance of ministries other than health, the health ministries are often reluctant to let go of the issue, said Banatvala. Health ministries are often weak and low in the pecking order. Uncharitably, I pointed out that maybe that was a problem at a global level as well, as NCD belongs to WHO, which is a weaker UN body than some of the others. If the global response to NCD looks weak at the 2018 meeting then the programme might be taken away from WHO—as happened with the AIDS crisis when the UN created UNAIDS.

So how is the world doing?

Ideally, each country would have NCD included in its UN Development Assistant Frameworks; a coordinated national plan overseen by a committee including different ministries and others, including academia, NGOs, and the private sector; and sufficient funding to implement the plan. Very few countries have all of these, and finance in particular is often lacking. Many politicians continue to see NCD as a problem of individual responsibility—if you live an unhealthy life what can you expect but to develop NCD? Many do not accept that people’s health is shaped primarily by their environment.

At the UN level few of the agencies see NCD as important to them. They may have documents that mention NCD but few have allocated many staff or resources. There is nothing like the response to HIV/AIDS, and little demand for radical action. Banatvala expressed disappointment that the civil society voice on NCD is weak and doesn’t have the anger that proved so effective for HIV/AIDS advocates. Others at the meeting thought it unlikely that there would be much anger, particularly when most of the population has no idea what NCD means.

Big Tobacco, Big Alcohol, Big Soda, and Big Food continue to interfere significantly with programmes to prevent and control NCD, said Banatvala, although he accepted the need to work with them (with the exception of Big Tobacco).

Funding for programmes will mostly have to come from countries themselves, but some assistance is needed by Overseas Development Agencies. Most, however, said Banatvala, are not stepping up and are stuck in “MDG-mode.”

The cruel truth seems to be that despite NCD being the world’s leading killer and having the potential to bankrupt health systems there are few incentives for anybody to take radical action as happened with HIV/AIDS. There is no political clamour for action. The economic argument might impress, but in many low income countries people die quietly, cheaply, and unnoticed from NCD—and can continue to do so. Plus there is an anxiety that investment in prevention might keep people alive to die of something else possibly more expensive. And with 17 SDGs, many of them huge in themselves, UN agencies and individual countries have to accept that they can’t advance on all of them.

But there are, said Banatvala, opportunities for improvement. There will be a report on progress or the lack of it to ECOSOC in 2018, and there will be the high level meeting. There was discussion about how many heads of state might attend: 34 attended the first high level meeting but none attended the follow up meeting in 2014. Heads of state understandably want to know if others will be there: it must be embarrassing, even humiliating, to be the only one at a meeting. Other opportunities are the WHO’s new commission on NCD, the push to universal health coverage, and collaboration with the International Task Force on Development.

Banatvala concluded, however, that the UN will have to up its game, and a commitment to serious funding of the Task Force might be a strong next move.