At this time of year, well at any time of year really, a look at alcohol may not go amiss.

Alcohol was originally what you put on your eyes, powder of antimony stibnite, antimony trisulphide, or black antimony, known to the Arabs as al-koh’l, from kohl, meaning paint or stain. Kohl was used as a cosmetic for blackening the eyelids, and the habit is even mentioned in the Bible: “kakhalt ainayikh”, you painted your eyes (Ezekiel 23:40), from the protoSemitic root kx̣l, powdered antimony. The Greek word for any salve, and particularly eye salve, was κολλούριον (incidentally a dimunitive of the word for a pessary or suppository), in English collyrium. This may have been connected with kohl, in Greek πλατυόϕθαλμον (literally “wide-eye”) or στίβι or στίμμι, which is the same as the Latin stibium, again powdered antimony. Antimonious ores were sometimes confused with lead ores, and alquifou was the name of a Cornish lead ore that looked like antimony, used by potters to give a green glaze to earthenware.

By extension, any fine powder produced by sublimation became known as al-koh’l, and the idea was further extended to fluids produced by sublimation or distillation, as in what Paracelsus called “alcool vini”, “alcohol of wine”, or just alcohol for short. When alcohol was characterised chemically and named ethyl alcohol (ethanol), the term was applied to similar compounds in the series, such as methyl alcohol (methanol) and propyl alcohol (propanol).

It is useful to know a little about the pharmacokinetics of alcohol. It is well absorbed throughout the gut, including the stomach. The rate of absorption depends on the concentration, with a maximum at about 15%, and is delayed by food. So if you want to get drunk quickly, take your gin with tonic or your whisky with Highland spring water (but not if it’s a high class malt—that would be sacrilege) and do it on an empty stomach. Alcohol is metabolised by alcohol dehydrogenase to aldehyde, which is metabolised to CO2 and water by aldehyde dehydrogenase. Women have less alcohol dehydrogenase in their stomachs than men, and so more alcohol enters the systemic circulation. They also have a lower apparent volume of distribution, so their blood alcohol concentration is higher at any dose. The consequences of these differences are obvious. Elimination is slow, about 6 g/h, and you can still be over the legal limit for driving the next morning after a heavy night. To do the calculations, use the nomogram below, but remember that wines are stronger these days. Alcohol is distributed in body water, which has a volume of about 40 L/70 kg, so to calculate the approximate blood alcohol concentration in mg/dL (mg%) divide the amount of alcohol in the body in grams by 0.4. 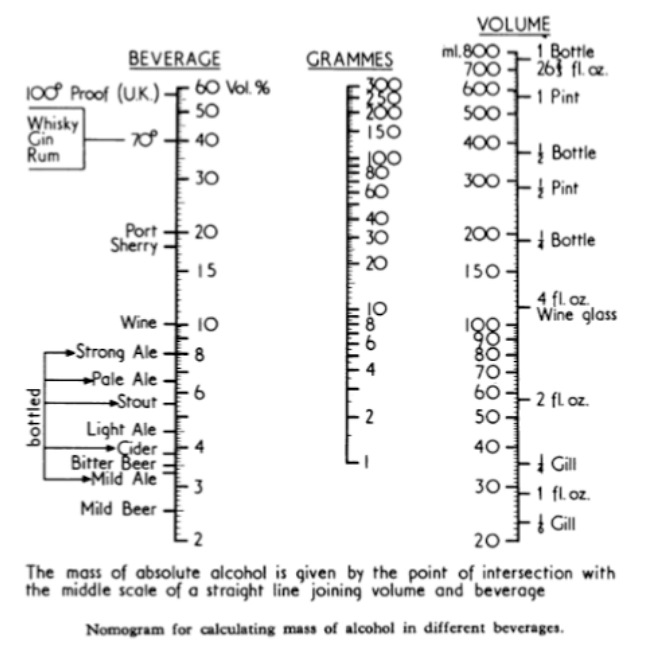 Inhibit alcohol dehydrogenase with chloral hydrate say, and you have a Mickey Finn. Inhibit aldehyde dehydrogenase with disulfiram or metronidazole, for example, and you get a very unpleasant reaction due to aldehyde, with flushing, headache, nausea, vomiting, sweating, vertigo, chest pain, hypoventilation, and in severe cases cardiac arrhythmias, myocardial infarction, congestive heart failure, and seizures.

You don’t necessarily have to get your alcohol from a bottle; some people can produce it themselves. In the gut fermentation syndrome, also known as endogenous ethanol fermentation, autobrewery syndrome, and plain drunkenness disease, gut organisms ferment ingested carbohydrate to alcohol. In 1931, Hurst & Knott described what they called “intestinal carbohydrate dyspepsia” (figure), attributed to fermentation of dietary carbohydrate. Then, in The BMJ in 1948 Ladkin and Davies described an African child whose stomach ruptured because of distension by alcohol due to fermentation of sweet potatoes by a mixture of Gram negative cocci and bacilli, although they did not give the syndrome a name. The terms “drunken syndromes” and “auto-brewery syndrome” emerged in the 1970s. 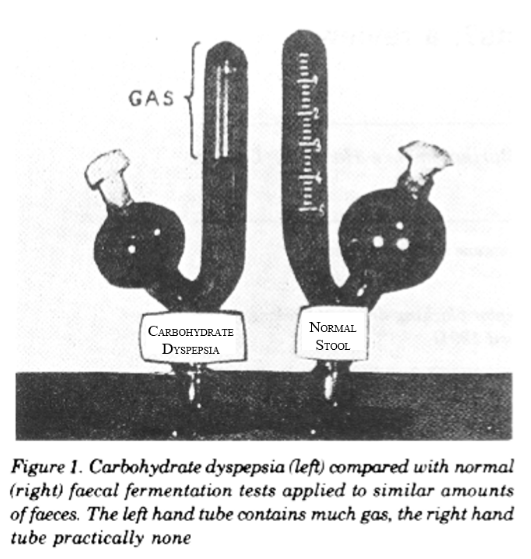 Most cases have been attributed to fermentation of dietary carbohydrates by yeasts, such as Candida kefyr, Candida albicans and Candida krusei, and Candida glabrata and Saccharomyces cerevisiae. The syndrome has been reported after surgery for Crohn’s disease and in children with short bowel syndrome. It has been suggested that it might be a cause of sudden infant death syndrome and it has also been used as a defence in cases of drunk driving. It may respond to a low carbohydrate diet, use of antifungal drugs, and avoidance of antibacterial drugs.

Fermentation of carbohydrates to alcohol may also occur in the absence of gut pathology, for example, after eating chocolates, although the resultant blood alcohol concentrations are generally below 20 mg/dL (4.35 mmol/L). This gives a new meaning to the word “chocaholic”.