There is much ambiguity in these words. For example, although “can” strictly speaking denotes ability, knowing how to or being able to, it is also used to denote possibility (“Yes we can”, which implies both ability and possibility) or permission (“Yes, you can”).

If you say “Aspirin can cause Reye’s syndrome”, you are implying that there is a known cause and effect association between the drug and the event, in other words that aspirin is capable of causing the syndrome, as is generally accepted.

There is little doubt about all this in the case of aspirin, but if you were to say that a new medication “can” cause some adverse reaction, you might be accused of falsely implicating the medicine as a general cause of the reaction, if the evidence was not satisfactory or contended. It would generally be better in that case to say “may” or “might”.

As I have previously pointed out, the UK’s General Medical Council defines the words “must” and “should” in relation to its various pieces of guidance for doctors, as follows:

Now, in its Prescribing guidance: Reporting adverse drug/device and other patient safety incidents, the GMC writes “You must inform the MHRA [the medicines regulatory agency in the UK] about . . . serious suspected adverse reactions to all medicines and all [sc. suspected] reactions to products marked with a Black Triangle in the BNF and elsewhere using the Yellow Card Scheme.” However, reporting in this way is not mandatory in the UK. It is mandatory in some countries, such as France, Denmark, and Korea, but in Japan the proposed introduction of a mandatory system for reporting fatal adverse events led to widespread fear of prosecution and defensive medicine; physicians started to refuse to see high risk patients and referrals to other hospitals became widespread; medical school graduates began to avoid specialties that were perceived as being legally particularly vulnerable, and various hospitals and clinics had to close.

It’s not that UK doctors must not report suspected adverse reactions, but not that they must. 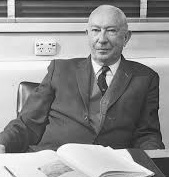 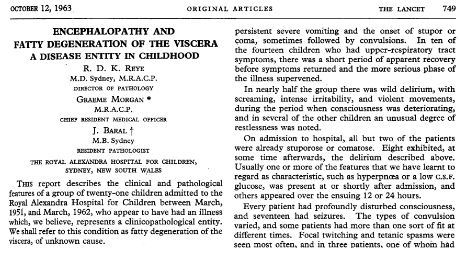 Ralph Douglas Kenneth Reye (1912–77), who, with Graeme Morgan and Jim Baral, described what we now call Reye’s syndrome in 1963 (Reye RD, Morgan G, Baral J. Encephalopathy and fatty degeneration of the viscera. a disease entity in childhood. Lancet 1963; 2(7311): 749-52); I guess that the surname Reye (pronounced rye) is a variant of the Spanish word for a king, rey.