“Resistentialism is a philosophy of tragic grandeur. It … derives its name from its central thesis that Things (res) resist (résister) men. Philosophers have become excited at various times, says [its originator Pierre-Marie] Ventre, about Psycho-Physical Parallelism, about Idealism, about the I-Thou Relation, about Pragmatism. All these were, so to speak, pre-atomic philosophies. They were concerned merely with what men think about Things. Now resistentialism is the philosophy of what Things think about us. The tragic, cosmic answer, after centuries of man’s attempts to dominate Things, is our progressive losing of the battle. ‘Things are against us’ is the nearest I can get to the untranslatable lucidity of Ventre’s profound aphorism, ‘Les choses sont contre nous.’”

Now, lest anyone has excitedly read this text, thinking that here is a new and interesting philosophy to which attention must be paid, let me quickly scotch any such idea. The paragraph above is taken from an extended essay called “Report on Resistentialism” by the English humorist Paul Jennings, parodying Jean-Paul Sartre. It should not be taken seriously.

Paul Jennings was born in 1918 in Leamington Spa. After serving in the Royal Corps of Signals during the war, he started writing freelance articles for periodicals such as Punch and The Spectator, and then, in 1949, joined the staff of The Observer, to which he contributed a weekly humorous article under the general heading “Oddly Enough”, finishing only in 1966. Collections of his pieces were published by Max Reinhardt Ltd in the 1950s and 1960s, starting with Oddly Enough (1950) and continuing with Even Oddlier (1952), Oddly Bodlikins (1953), Next to Oddliness (1955), Model Oddlies (1956), Gladly Oddly (1958), Idly Oddly (1959), I Said Oddly Diddle I? (1961), Oodles of Oddlies (1963), Oddly Ad Lib (1965), and I Was Joking, of Course (1968), as if anyone ever doubted it. Retrospective collections appeared as The Jenguin Pennings (1964), Golden Oddlies (1983), and The Paul Jennings Reader (1990). The historian Norman Scarfe, who contributed the entry on Jennings to The Oxford Dictionary of National Biography, wrote of him that “His method was to start with something very familiar and then spin illogical and fantastic speculations around it, creating a brilliant and often subversive parody.” A perfect description.

“Report on Resistentialism” first appeared as a one-page article in The Spectator on 23 April 1948 and was reprinted in The New York Times on 13 June 1948. A much extended version appeared first in Town and Country in 1949 and then in Oddly Enough (picture). A later piece, “Developments in Resistentialism” was included in Even Oddlier. 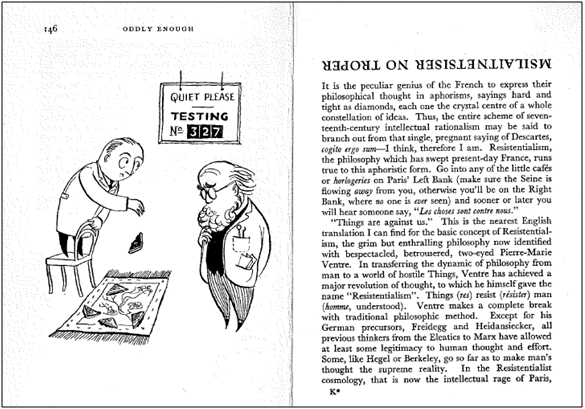 The importance of Jennings’s article lies not in the idea of resistentialism—others had postulated the malignity of inanimate objects before and have done so independently since—but in the nature of his parody of Sartre and other philosophers, whom he calls, for example, Freidegg, Heidansiecker, Qwertyuiop, and Pompes-Funèbres. Sartre’s play “Huis Clos” is lampooned as “Puits Clos”. The Universe is La Dernière Chose, man is un pseudo-chose or Not-Woman, while woman is Not-Man. Things exist not merely in themselves (chose-en-soi) but also as malignant objects existing for themselves (chose-pour-soi). Resistentialist music has no instruments, paintings no paint. Ventre sees science “not as man’s conquest of Things but as the conquest of man by Things”, thus “[bridging] the gap between philosophy and science”, in a way that even C P Snow and F R Leavis did not postulate when they later came to debate the so-called two cultures.

The word “resistentialism” has been done the honour of being included in the Oxford English Dictionary, where it is defined as “The [humorous] theory that inanimate objects are hostile to humans; hostility manifested by inanimate objects”, accompanied by illustrative quotations from Jennings and others. It is described as being derived from a blend of either resist or French résister with existentialism, punning on classical Latin res, things.

In one sense Jennings’s parody failed, since he wrote it in comprehensible language, in contrast to the prose of some of the philosophers whom he was parodying. Later parodists have taken a more devious approach. Next week I shall describe some excellent examples.

The start of Paul Jennings’s essay “Report on Resistentialism”, as published in Oddly Enough (1959 reissue); the cartoon, by Haro Hodson, illustrates “the famous Clark-Trimble experiments of 1935”, in which pieces of toast and marmalade, graded, weighed, and measured, were dropped on to 400 pieces of carpet of varying degrees of quality; the marmalade-downwards incidence varied exactly with the quality of the carpet: “the toast fell right-side-up every time on the cheap carpet, except when the cheap carpet was screened from the rest (in which case the toast did not know that Clark-Trimble had other and better carpets), and it fell marmalade-downwards every time on the Chinese silk.” According to Jennings, these observations generate the Principle of the Graduated Hostility of Things. In pharmacological terms, resistentialism is dose-related!