Last week I showed how the noun “culture” developed from the IndoEuropean root KWEL, which implied turning in different ways. “Culture” entered English in the 15th century with meanings related to tilling the soil, both on its own and as a suffix in “agriculture”; “horticulture” followed in the late 17th century, but it was not until the start of the 19th century that “culture” started to become widely used as a suffix, yielding a wide variety of derivatives. In words such as floriculture, arboriculture, apiculture, viticulture, and pomiculture it referred to the cultivation of specific types of plants or animals, and in words such as mariculture, mosaiculture, and monoculture it referred to varieties of cultivation.

Towards the end of the 19th century this meaning was extended to the artificial growth of microorganisms or other plant or animal cells or tissues in nutrient media in vitro, for example “cell culture”, “tissue culture”, and “germiculture”. By extension it then came to mean development or improvement of some attribute, individual, or thing, such as the mind (menticulture), children (puericulture), and towns (urbiculture). And because the original root also carried an implication of worship, it was used to form words denoting devotion to some person or institution, such as demons (demoniculture) and kings (regiculture).

The idea that personal attributes, such as the mind and manners, could be cultivated or developed, or improved by education and training led to the use of “culture” to denote such effects in the early 16th century. Then by extension, in the late 17th century “culture” came to mean refinement of mind, taste, and manners or artistic and intellectual development. It thus came to be generally used to denote various manifestations of intellectual achievement.

This seems to be the sense in which C P Snow used it when he titled his 1956 article in the New Statesman “The Two Cultures”, and his 1959 Rede Lecture “The Two Cultures and the Scientific Revolution”, although by then the word had accumulated other related meanings, such as “the distinctive ideas, customs, social behaviour, products, or way of life of a particular nation, society, people, or period” and “the philosophy, practices, and attitudes of an institution, business, or other organization” (OED).

T H Huxley, in his 1880 lecture “Science and Culture”, described the classical scholars who, he said, had excommunicated the advocates of scientific education, as “Levites, in charge of the ark of culture and monopolists of liberal education”. Snow found himself being excommunicated, not by Levites, but by Leavisites, specifically F R Leavis, the rigorous combative Cambridge literary critic, and his followers. Leavis disagreed profoundly with Snow and was enraged. Enraged (and wont to vent his rage in vitriolic terms) partly because Snow’s lecture, to Snow’s surprise, had, as Leavis wrote, “rapidly [taken] on the status of a classic”, and partly because Snow, a scientist whom Leavis regarded with unmitigated contempt, had been successful as a novelist, encroaching on Leavis’s territory, while he, Leavis, had been deprived of the recognition he thought he deserved. Here are some extracts from Leavis’s 1962 Richmond Lecture, “The Significance of C. P. Snow” (picture): 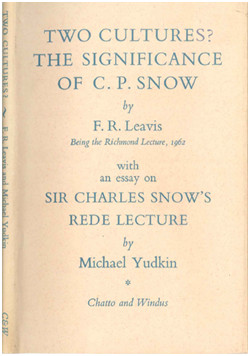 “Not only is he not a genius; he is intellectually as undistinguished as it is possible to be.”

“Snow, I repeat, is in himself negligible.”

“The Two Cultures exhibits an utter lack of intellectual distinction and an embarrassing vulgarity of style.”

“Of history . . . of literature . . . Snow exposes complacently a complete ignorance.”

“[Snow’s] lecture was conceived and written by someone who had not had the advantage of an intellectual discipline of any kind.”

Next week, I shall outline the nature of the debate and suggest that neither Snow nor Leavis was correct, that we are in fact multicultural.