Last week I suggested that passive diffusion and active dissemination of the outcomes of research could together be called “promulgation”. To promulgate is defined in the Oxford English Dictionary as “to make known by public declaration; to publish; esp. to disseminate (some creed or belief), or to proclaim (some law, decree, or tidings).” I rhetorically suggested that it came from the same IndoEuropean root as has given us words such as milk and emulsion. However, the dictionary gives an alternative possible explanation, that “promulgation” is an altered form of “provulgation”, an obsolete 16th century word with the same meaning. Vulgare in Latin meant to make something available to the mass of the population or to make something become generally applicable, and hence to publish. The related noun, vulgus, meant the common people or general public, but also public dissemination of information.

According to Everett Rogers in his 1962 book Diffusion of Innovations, there are four phases in which promulgation of the outcomes of research occurs: introduction, early adoption, late adoption, and never adoption. Rogers called those who fill these categories, innovators, early adopters, the early majority, the late majority, and laggards.

Rogers acknowledged the contribution to these ideas of earlier work still, by Bryce Ryan and Neal Gross. A hybrid corn seed, developed in 1927, was rapidly adopted by US farmers, until it was in widespread use in the 1940s. Ryan and Gross studied this process in detail, and some of their results are shown in Figures 1 and 2, which I have redrawn from the data they gave in their 1950 paper. The several assumptions that Ryan and Gross made included the following: 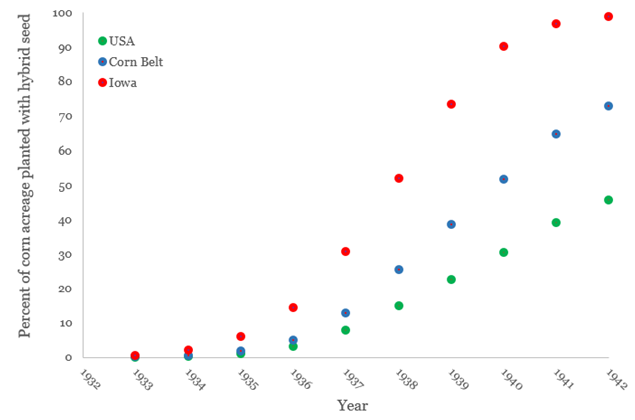 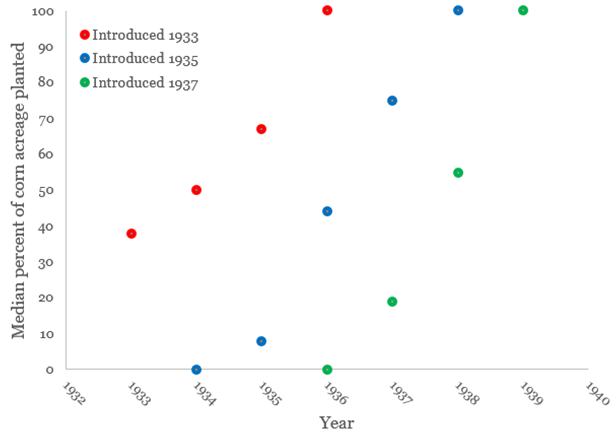 Figure 2. Percentage uses of the hybrid corn seed in three different areas in which the innovation was introduced at three different times (data from Ryan & Goss, 1950, Table 3)

The implication of their results is that promulgation of the outcomes of research in general follows a sigmoid pattern. Although most of the illustrations in Rogers’s book are theoretical, he did show a few sets of real data, including, in the fifth edition (2003), a similar sigmoid pattern for the worldwide rate of adoption of the internet.

When I was a member of the Balliol Collaboration in 2009, discussing the adoption of surgical innovations, I proposed an acronym, IDEAL, for a schema that describes the different phases of adoption of innovative techniques. I have adapted that schema from the original Lancet paper (Table) and have mapped it on to Rogers’s schema and, for comparison, the phases of drug development, which formed the basis of the collaboration’s discussions. In our paper we discussed a range of patterns, but the half dozen examples that we gave all looked reasonably sigmoid.

Whether “promulgation” actually derives from “vulgus” is not clear, but it is certainly not vulgar to promulgate the results of your research, and there is an IDEAL way to describe its sigmoid shape. The IDEAL schema continues to be developed.