As I have previously discussed, although the idea of translational research did not start to emerge as such until the 1980s, it had roots in the idea of “diffusion of innovations”, “the process in which an innovation is communicated through certain channels over time among the members of a social system” as Everett Rogers defined it in Diffusion of Innovations, first published in 1962, the latest edition being the fifth (2003). In 1988 Greer described how diffusion applied to the ways in which new medical technologies were introduced into clinical practice, differentiating “formed” (i.e. complete) and “dynamic” (i.e. still developing) technologies, and explaining the disjunction between clinical practice and the evidence that should underpin it.

However, the diffusion of abstract things, such as ideas and knowledge, has an older pedigree. It was already extant when in 1600, in a book called An Exposition Upon the Prophet Jonah, George Abbot, Professor of Divinity and Master of University College, Oxford, wrote of God’s word that it was “very apt for diffusion, and spreading abroad.” And Samuel Johnson, in a 1750 issue of The Rambler, wrote that “the writer receives little advantage from the diffusion of his name.”

“Dissemination” comes from the IndoEuropean root SĒ, to sow. In Latin semen meant any kind of seed; in English it now only means what the Oxford English Dictionary calls “The impregnating fluid of male animals”, consisting of spermatozoa and seminal fluid. Seminal originally meant related to seed of any kind, plant or human, but then came to mean having productive potential, in the abstract describing highly original and influential ideas and knowledge that ought to be disseminated.

A seminary was originally a seed plot, a piece of ground in which plants are sown, for later transplantation, then a place where animals are bred, and eventually a place where something educational or moral, such as a vice or virtue, is bred, a place of education. W S Gilbert described the three little maids in The Mikado as having “come from a ladies’ seminary, freed from its genius tutelary”. He used the word again in Iolanthe to rhyme with words such as airy, vary, arbitrary, necessary, vagary, and quandary: “With dames unknown / I ought to be more chary. / It seems that she’s a fairy / From Andersen’s library; / And I took her for / The proprietor / Of a ladies seminary.”

In contrast, when Cleopatra tells her eunuch, Mardian, “Tis well for thee, That being unseminar’d, thy freer thoughts May not fly forth of Egypt” (I,v,10–12), she is referring to his inability to produce semen and therefore his lack of virility. “Hast thou affections?” she asks him. “Yes, gracious madam,” he replies. “Indeed?” “Not in deed, madam, for I can do nothing. … Yet I have fierce affections, and think what Venus did with Mars.”

Sator in Latin is one who sows seeds, literal or metaphorical, a founder or progenitor. We see it in an early piece of word play, a forerunner of the crossword puzzle (picture). Reduplicating SĒ gives season (Latin satio), the act of sowing or planting. And as the poet of Ecclesiastes reminds us “To every thing there is a season, and a time to every purpose under the heaven. A time to be born, and a time to die; a time to plant, and a time to pluck up that which is planted.”

In heraldry semé, semée, or seméed, from a French word meaning sown, means powdered or strewn with small heraldic devices, and another French word, colza, means coleseed or rape seed.

Sinsemilla, literally “seedless”, is a name given to female Cannabis sativa plants that have not been pollinated; they contain high concentrations of cannabinoids and are being increasingly used.

Since passive diffusion and active dissemination are so closely linked, we might perhaps use a single word to encompass them both, say promulgation, from the Latin verb promulgare, to make something widely known, particularly by public proclamation, or to publish such things as doctrines and writings, in other words ideas and knowledge. The word originally came from the IndoEuropean root MELG, to squeeze out, giving us milk, mulct, and emulsion.

Promulgation, the combination of diffusion and dissemination, is the milk of translational research. Next week I shall explore its shape. 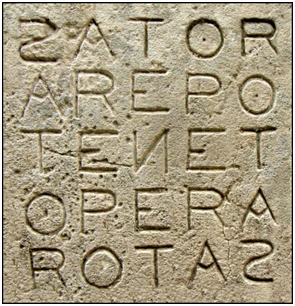 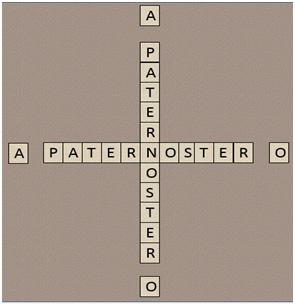 An ancient word square, which reads “Sator Arepo tenet opera rotas”, translated as “The sower Arepo holds the wheels with care” or “The sower Arepo holds wheels at work”. The earliest version was found on a column near the amphitheatre in the ruins of Pompeii. Other interpretations have been suggested, and it has been anagrammatized into the cross on the right, two paternosters each flanked by an alpha and an omega.