A reader of The BMJ has written to the editor to ask for clarification of the terms “sepsis” and “septicaemia”. The answer could be said to be rather creepy.

The IndoEuropean root SERP meant to crawl or creep. The Latin verb serpere meant to glide or crawl, to wind along like a snake, to extend in a serpentine manner, or to gain ground gradually. The present participle of the verb, serpens, was also used as a noun, meaning a snake or a maggot; serpula was a small snake and serpullum a kind of herb that crept along the ground. The name Serpens was also given to a constellation whose head and tail, Serpens Caput and Serpens Cauda, were conceived as winding around the constellation of Ophiuchus, which in Greek means serpent holder, later translated into Latin as Serpentarius.

Dropping the r from SERP gave the Greeks σήψ, a serpent whose bite caused intense thirst followed by mortification of the bitten flesh. In the Epidemics, attributed to Hippocrates, σήψ was used to mean a putrefying sore and its formation was explained in humoral terms. It is now used in English to refer to a genus, Seps, of a type of lizard with a serpent-like body.

In Greek SERP also gave ἕρπειν, to creep, and ἑρπετόν, any creeping thing, in general a reptile; ἑρπυστικά were spreading ulcers. Herpetology is the study of reptiles and herpes is a creeping eruption. These words arose because of replacement of the initial sigma by an aspirated rough breathing. For example, the moon goddess Selene was cognate with another goddess Helle, one of whose votaresses was Helen of Troy, before she married Menelaus. This switch also occurred between languages. Compare, for instance, the Greek and Latin words for a pig (ὗς and sus), salt (ἅλς and sal), six (ἕξ and sex), seven (ἑπτά and septem), and to leap (ἅλλεσθαι and salire).

From the putrefying wound inflicted by a snake, also called σήψ, came the words σήπειν, to rot, and σῆψις, fermentation or putrefaction. In the theory of pepsis (πέψις, softening or ripening) and sepsis, the former implied healthy gastrointestinal digestion, the latter intestinal rejection of non-nutritious food, supposedly through putrefaction in the colon. When the word sepsis entered English in the mid 19th century it meant putrescence or putrefaction. Septicaemia, defined as putrid infection of the blood, appeared at about the same time; the earliest instance of septicaemia in a publication indexed in PubMed is from 1873—13 years earlier than the earliest instance of sepsis, from 1886.

The history of ideas about sepsis is complicated, but at least from the time of Galen it was associated with a generalised abnormality as a result of inflammation, associated with the view that pus formation should be encouraged as part of the healing process (“laudable pus”). Sepsis is currently defined as life threatening organ dysfunction caused by a dysregulated host response to infection. The term “severe sepsis”, previously used to describe the combination of organ dysfunction and septic shock (hypotension and hypoperfusion), is no longer used. This has replaced the 1991 description of sepsis as a clinical syndrome of systemic inflammation and widespread tissue injury, characterised by the so called systemic inflammatory response syndrome (SIRS—fever, tachycardia, tachypnoea, and leukocytosis) in the presence of culture proven infection. Septicaemia is infection in the bloodstream, and it can lead to general effects, i.e. sepsis.

That the two terms have sometimes been confused is illustrated by the fact that in version 9 of the International Classification of Diseases (ICD-9-CM), sepsis and septicaemia had the same diagnostic code, 038. The difference was formally recognised in 2003, when sepsis was given a different code, 995.92; in ICD-10 it is R65.20. Septic shock has a separate definition (“a subset of sepsis in which underlying circulatory and cellular/metabolic abnormalities are profound enough to substantially increase mortality”) and ICD-10 code, R65.21.

The figure shows the changing frequencies with time of the uses of the two words in papers indexed in PubMed. The use of “sepsis” increased gradually from about 1960 and then more markedly from 1992, following the introduction of new definitions; it really took off after 2003, when the new codes were introduced. Meanwhile, the use of “septicaemia” merely crept along, like the snakes with which the words were originally associated. 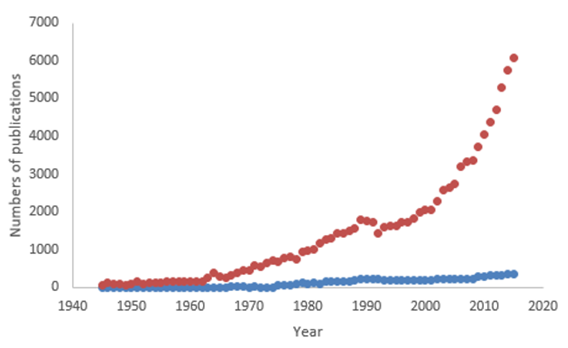