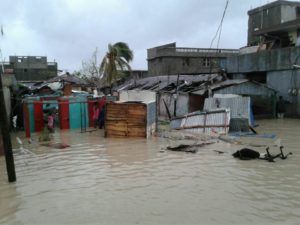 Cholera has been in Haiti since shortly after the earthquake in 2010. Before Hurricane Matthew hit Haiti this month, it was predicted there would be 50 000 cases by the end of this year. Sadly, with some areas showing as much as a 91% increase in cases last weekend, this number is now feared to be much higher.

When the deadly storm ripped through Haiti, it took with it the homes, livestock, and crops belonging to thousands of people and left behind severe flooding and devastation. At the time of writing, the death toll is more than 1000 and at least 62 000 people have had to leave their homes.

This has led to perfect conditions for cholera and other diseases to spread; flooding has left a lot of stagnant water, and safe drinking water is frighteningly scarce. The charity I work for, Doctors of the World (DOTW), has been working in Haiti since 1989 and had 47 staff and medics on the ground ready to respond. 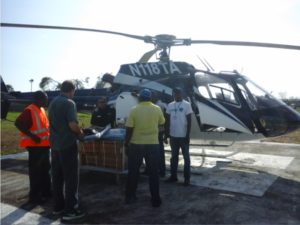 A priority is to break the chain of contamination while also treating cholera cases. We have six fast response mobile units of doctors, nurses, and water, sanitation, and hygiene (WASH) specialists in southern Haiti. While the medics treat the cases, the WASH experts disinfect with chlorine sprayers, provide hygiene information and kits to the public, and are setting up safe water stations and toilets.

There is hope that the cholera threat could be reduced by the million doses of cholera vaccine—two doses are required per person—that the World Health Organisation (WHO) are sending to Haiti. However, this alone would not be enough to prevent an epidemic. Firstly, it will take time before the vaccination is able to be rolled out which can only happen after the target population has been identified. Secondly, the WHO emphasises that “safe oral cholera vaccines should be used in conjunction with improvements in water and sanitation.”

WASH is therefore critical to prevent disease caused by poor sanitation, of which cholera is only one. Other diseases associated with a lack of safe water and sanitation, such as dysentery, typhoid, and infectious hepatitis, could also be extremely dangerous in an area recovering from total devastation, particularly for the under-5’s.

Over a week after the storm hit, the scale of this disaster seems to grow each day. The most affected parts of Haiti were also the biggest agricultural areas, meaning the entire country is likely to suffer from the destruction of crops and loss of livestock. Malnutrition is a serious risk, exacerbated by the threat of gastrointestinal disease. 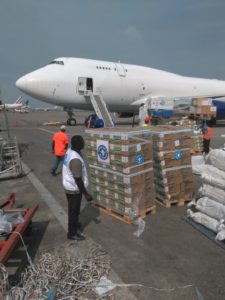 Aid efforts are now beginning to reach those who were cut off by the collapse of a bridge in Petit-Goâve and damage to main roads, which made initial assessments near impossible. Along with the WHO, Doctors of the World was able to reach isolated areas, such as Les Cayes, by helicopter and we also located boats to help reach and transport those in need of medical attention. From Europe, DOTW teams sent three tonnes of medical supplies and cholera treatment along with medics to support the existing teams.

The hurricane could not have chosen a worse place to strike. Haiti’s health system was already extremely weak, particularly following the 2010 earthquake, and around 60% of Haiti’s rural population received no healthcare at all. For pregnant women, this was a major problem. Before the hurricane, Haiti already had the highest maternal mortality rate in the Americas due to the remoteness of homes from health centres.

The UN reported that there were 10 000 pregnant women in the areas worst hit by the storm, and 60 000 altogether in southern Haiti where some medical facilities were destroyed. DOTW medics are providing maternal and child healthcare despite the damaged facilities, as well as supporting the ministry of health to restore primary health services, such as for those with chronic conditions.

In the coming weeks donations from the public will be crucial to ensure that disease and famine do not further afflict this already much blighted country.

Philippa Hatton is a communications officer at Doctors of the World.