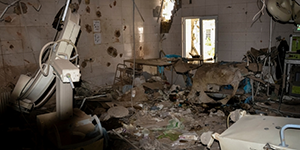 Battlefields without doctors, in wars without limits

Médecins Sans Frontières (MSF) is remembering one of the darkest moments in its history. On 3 October 2015, US airstrikes killed 42 people and destroyed the MSF trauma hospital in Kunduz, Afghanistan.

As we grieve the loss of our colleagues and patients, we are left with the question: is it still possible to safely provide medical care on the frontline? In the past year, there have been a further 77 attacks on medical facilities run and supported by MSF in Syria and Yemen.

Hospitals are being continually dragged onto the battlefield, and patients and their doctors and nurses are sacrificed in the process.

It was the destruction of the Kunduz Trauma Centre, and the devastating assault on health facilities in Syria and Yemen that led to UN Security Council Resolution 2286 being passed in May 2016.

The resolution strongly condemned attacks on medical facilities and demanded that all parties to armed conflict comply fully with their obligations under international law. And yet, five months later and on the same day as two health facilities were hit in Syria, we returned to the chambers of the Security Council to decry the hypocrisy of States—particularly those involved in the wars in Syria and Yemen.

With one hand States sign a resolution to protect health facilities, while with the other they continue to be directly involved or complicit in the ongoing onslaught against health workers and patients in conflict zones.

What is clear is that with every attack on a health facility the chasm widens between the rhetoric from governments about their respect for International Humanitarian Law, and the way they wage wars in reality.

No government has ever said it intentionally bombs hospitals, but they are bombed nonetheless. More often than not, these attacks occur under the umbrella of the ever-expanding “war on terror”—a label used with increasing frequency including today by all military coalitions in Syria.

Attacks are either dismissed as tragic “mistakes,” denied outright, or become political footballs as States desperately point fingers at each other while claiming at the same time that their bombs are the smartest and that their airstrikes are the most “humanitarian.”

We cannot accept that we might be targeted for treating the wounded enemy. We will take our message to those with the fire power in all of the places where we work.

There have been no impartial investigations carried out by an independent international body into any of the seven aerial attacks on hospitals. This is because there is zero political will among governments to have their military conduct examined from the outside.

In the case of Kunduz, the US carried out an internal military investigation and made a heavily redacted report available to the public in April.

It is more than we have received from any other military force that has been involved in bombing an MSF facility.

This investigation undertaken by the US has allowed us to gain a deeper insight into the events that occurred in Kunduz on the night our hospital was attacked. Yet some of what we have learnt from the US investigation report is deeply worrying.

The ground troops in Kunduz falsely assumed that “all civilians had fled and only Taliban remained in the city.” They made no effort to find out if this was actually true and did not take the necessary precautions to avoid civilian casualties. The entire city of Kunduz was deemed hostile.

No one in the chain of command consulted the no-strike list in the hours leading up to the attack. The report determines that our hospital was misidentified. This led to 211 artillery shells from an AC-130 being unleashed on our hospital without any hostile threat being confirmed.

MSF continues to engage with the highest levels of the US and Afghanistan governments to gain assurances that this will not happen again.

“Everyone becomes a potential target”

The responsibility for the protection of hospitals—in whichever conflict they operate—does not lie with us moving healthcare away from the battlefield. At the core of the law of war is the responsibility that militaries have to distinguish legitimate targets from protected civilian sites. If there is no distinction made between a civilian and a combatant, then everyone becomes a potential target.

For more than 40 years MSF has negotiated the protection of its medical facilities in conflicts around the world. Our work in convincing warring parties to respect health facilities will continue.

For example, still to this day some Afghan officials attempt to justify the attack on our trauma centre by falsely claiming that the hospital was “full of Taliban.”

We are left to wonder: does following medical ethics and treating everyone who needs it, including the wounded from all sides, transform our hospitals into “enemy bases?”

We cannot accept that we might be targeted for treating the wounded enemy. We will take our message to those with the fire-power in all of the places where we work.

We will continue to demand of the most powerful and their allies that they turn their rhetoric into reality. And we will denounce those who seek to erode the laws of war.

A war without limits leads to a battlefield without doctors. We will not sit silently by and let this happen.