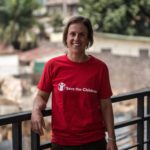 Responding to an outbreak of yellow fever is not as exotic as you may imagine.

What kind of exciting and interesting things do you do as an emergency response nurse with Save the Children’s emergency health unit in the Democratic Republic of Congo (DRC) the day before one of the largest ever vaccination campaigns in Africa starts? Label things. 204 vaccine carriers, to be exact, carefully labelled in permanent marker. In a response of this scale the details are important—a label could make the difference between life and death.

The yellow fever outbreak has required an immense amount of planning as the virus has the potential to spread rapidly in DRC, and beyond, for a number of reasons:

Urban transmission. Kinshasa is a city with an estimated population of 10 million people, although the last census was completed in the 1980s and some estimate it is millions more. Kinshasa is densely populated and a breeding ground for the Aedes aegypti mosquito, a day biting species and the vector for Yellow Fever.

Limited immunity among the adult population. Yellow Fever immunization was only integrated into the national Expanded Program on Immunization in 2003. At least seven million people in Kinshasa have never received the vaccine, leaving an incredibly large number of people susceptible to the disease.

Population movement. The movement of adults to find work and support their families is common, and the border with Angola—where the outbreak began and where 80% of the current cases in DRC originated—is relatively porous, further increasing potential for the spread of the disease. 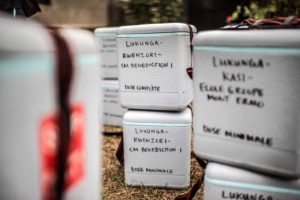 Vaccine, or lack of it. Despite the fact that there is a highly effective vaccine—immunity is conferred in one week for 95% of people after one dose—there are only four manufacturers in the world and vials take over a year to produce. The global stockpile will not meet the needs of this outbreak, so an innovative strategy of fractioned dosing is being implemented. There is evidence this will protect people for at least a year—buying some time to produce more vaccine.

And so with a potential public health emergency looming, a target population of over 340,000 people, and an agreement to support the Ministry of Health to run 102 vaccination sites—we planned. And we labelled things. And now it has begun. And the response has been overwhelmingly positive so far.

At vaccination sites there are crowds of people, eager to get the vaccine. Even children, not typically excited to get stuck with a needle, are lined up patiently waiting their turn.

Results from a household cluster survey to assess coverage show that by day five of a ten day campaign we are rapidly approaching 80% of coverage.

Responding to a disease outbreak might not be as exotic as you imagine, but it is crucial that the necessary resources and support are provided to local health staff and the MoH. Technical supervision, cold chain and waste disposal management, and real time data collection are all essential to improve quality and assure adequate vaccination coverage.

I am proud to be part of Save the Children’s Emergency Health Unit—a team of doctors, nurses, water, and sanitation engineers, logistics specialists, and other experts in the field of public health and emergency response—supporting the Yellow Fever vaccination campaign in Binza Ozone, Kinshasa. And if I am honest, I actually love labelling things.

Nora Hellman is a registered nurse with Save the Children’s rapid response Emergency Health Unit (EHU). She has field experience in conflict zones, natural disaster and epidemics, most recently working during the Ebola outbreak in West Africa. When not trying to finish her MPH or labelling things she retreats to her home in Bozeman, Montana, USA.