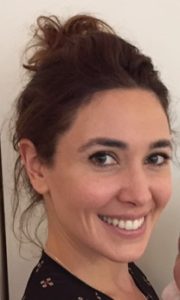 Six weeks without gravity. Cushioned in a single white space for the duration. Air tanks, tubes, and pressure gauges surrounding me, the calendar days marking off a gentle, indistinct blur.

And now, finally, here I am, learning to walk again. My body shakes under the exertion. The simple act of straightening a leg, of now bearing weight on it, seems impossible. To hold up one leg is to hoist up a weight too great. The fat pads on my feet have dissolved, the bones rest directly on the concrete floor. While perhaps short of allodynia, the increased sensitivity on the soles of the feet mean a nauseating pain.

An accident, six weeks earlier, had caused more than eight fractures in my neck and spine. After identifying eight fractures, the MRI report stated that there were “likely more.” Miraculously, there was no neurological compromise, and now, here I am, six weeks later, trying to learn to walk again.

My mind has kindly hazed the emergency air transfers, the nights in intensive care, but is now rewarding me with crystal clarity of the task at hand.

Learning to walk again. A task that had once been so mindless, now appearing so enormous. I am at the same stage as a friend’s 10 month old child. We place bets on who will walk first. He is currently odds-on favourite, maniacally free-wheeling in his frame, while I am not even able to get to mine.

I am acutely aware that I am one of the lucky ones, firstly to survive such an accident at all, and secondly to be on a path to complete recovery. Yet despite the meditation, gratitude, and acceptance that I practise, there is still more than an occasional niggle of why me, why now, why this?

And so, as I endeavour to stand, it suddenly makes more sense to imagine that I am an astronaut just returning from space. My body doesn’t know any different. For it, the physiological effects are the same: the loss of muscle tone and bone density from the prolonged lack of gravity, the nutrient deficiencies from the decreased diet, the cardiovascular depletion due to the lack of exercise, all the same.

And yet to my mind, the illusion that I am recovering from a space odyssey is astronomically different. My journey is a choice. It adds more than an element of adventure to the physiotherapy process, culminating in the success of “one small step.”

And so how do we best include this mental component in our own medical practices? Involving the mind and its capabilities in helping the physical body to heal is surely one of the final frontiers for medicine. When we are able to effectively harness the healing powers of the mind, we surely will have taken one “giant leap for mankind.”

Rachel Thomas is a NHS trained doctor, and is the author of medical textbooks including Practical Medical Procedures at a Glance and Medical School at a Glance.