It has been reported that Department of Health lawyers have said that the secretary of state for health, known to us as the SoSH or the Cunctator, never intended to “impose” a contract on the junior hospital doctors, only that the contract would be “introduced” from August (as quoted in the Independent on 18 April).

“Impose” comes from the Latin verb ponere, to place, set, or put, in various senses. Imponere meant to place, put, or lay on, in, or over. However, it also carried a connotation of authority, and because it could mean to put someone in command it also came to mean to lay on as something to be borne and therefore to force something, such as a tax or a punishment, on someone. These and other meanings entered English in the 16th century.

“Introduce” comes from ducere, to lead. Introducere meant to lead or bring in, to insert into a speech or book. It has similar meanings in English, including “to bring into use or practice”. However, in Latin it could also mean to bring forward for discussion or decision and to start an action at law. Perhaps it is one of those meanings that the SoSH has in mind.

This attempt to change “impose” to “introduce” smacks of what are called weasel words. A weasel word is defined in the OED as “an equivocating or ambiguous word, which takes away the force or meaning of the concept being expressed”.

“I can suck melancholy out of a song,” says Shakespeare’s Jaques in As You Like It, “as a weasel sucks eggs.” The phrase “weasel words” was first recorded in a political story by Stewart Chaplin in 1900, although Theodore Roosevelt claimed that he himself had thought of the term independently before that, and later used it in criticising President Woodrow Wilson and others not of his own Bull Moose (Progressive) Party, to describe rhetoric that sounds as if it has substance but is actually empty of specific meaning, or is at best ambiguous and vague. Whatever positive action is implied can later be denied.

Roosevelt, quoted in 1912 (picture), described “a typical vice of American politics—the avoidance of saying anything real on real issues, and the announcement of radical policies with much sound and fury, and at the same time with a cautious accompaniment of weasel phrases, each of which sucks the meat out of the preceding statement.” Listen to the speeches of today’s presidential hopefuls and appreciate that the technique survives. 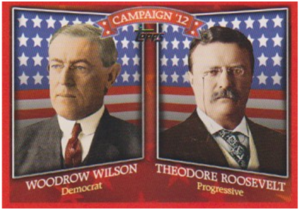 Individual weasel words or weasel phrases transform the sentences in which they occur into weasel sentences, the empty rhetoric that results from their insertion. Here is Roosevelt again, later in the same speech: “The weasel sentence about States rights could well have been suggested by the astuteness of Mr Bryan’s fellow Democrat, Mr Ryan”.

You might expect to find examples in the UK television series Yes, Prime Minister, and here is one from the episode “The Smoke Screen” (first broadcast on 23 January 1986):

Prime Minister: Smoking should be stopped. Oh, no question. And we will stop it . . . In due course, at the appropriate juncture, in the fullness of time.

Health Minister: You mean forget it?

The Health Minister recognises the Prime Minister’s weasel phrases, “in due course” etc, which suck the meaning out of his otherwise definitive statement that “we” would stop it.

Actually, there is no practical difference between imposing and introducing a contract. Given the definition of the word “contract” (“[a] mutual agreement between two or more parties that something shall be done or forborne by one or both”, OED) a contract can’t be imposed unilaterally. You can’t force the other party to sign it, so you can’t impose it. Similarly, if you “introduce” it, in whatever meaning you choose, the other party still has to sign it and can’t be forced to do so, although in either case they may feel that they have no other choice. One can only conjecture what the SoSH thinks “introduced” means and whether he believes that a contract can be “introduced” unilaterally any more than it can be “imposed”. Could it be that he, or his legal team, thinks that by using the word “introduce” he can suck the meaning out of “contract”?

Whenever you hear a politician speak, listen out for the weasel words or phrases and the weasel sentences. Next time I shall describe the forms they take and how to recognise them.