Today, 12 February, is the 75th anniversary of the first clinical use of penicillin in Oxford in 1941 (picture). 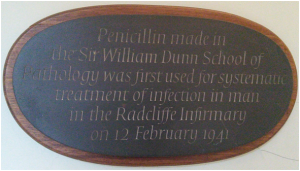 Image: A plaque commemorating the first administration of purified penicillin to a patient in the Radcliffe Infirmary on 12 February 1941 by Dr Charles Fletcher; the word “systematic” is not necessarily an error; the word has occasionally, albeit rarely, been used to mean systemic, the word that we would now use, and the OED lists examples from the 19th, 20th, and even the 21st centuries.

Alexander Fleming invented the word “penicillin”, which he first used in an article in the British Journal of Experimental Pathology in 1929, titled “On the antibacterial action of cultures of a Penicillium, with special reference to their use in the isolation of B. influenzæ”:

“In the rest of this article allusion will constantly be made to experiments with filtrates of a broth culture of this mould, so for convenience and to avoid the repetition of the rather cumbersome phrase ‘Mould broth filtrate’, the name ‘penicillin’ will be used. This will denote the filtrate of a broth culture of the particular penicillium with which we are concerned.”

“B. influenzae” is what we now call Haemophilus influenzae. The “particular penicillium” to which Fleming referred was Pencillium rubrum.

The Indo-European root PES meant a tail, as did the Latin word penis. The diminutive penicillus, a little tail, was used to mean a brush, and specifically a paintbrush. This came into Old and Middle French as pincel or peincel (in modern French, pinceau) and then into English as pencil, which originally meant a paintbrush, typically one with fine hair tapered to a point, suitable for delicate work, and later any tapered or pointed instrument for writing or drawing. “Pencil” is also slang for the penis, echoing the original etymology. Penicillium species have conidiophores and conidia, brush-like asexual fruiting structures (picture).

Penicillin was not the first antibacterial drug. The sulfonamides, for example, were discovered by Gerhard Domagk in 1932. But penicillin was the first antibiotic, defined as a substance that is produced by living organisms and that can destroy or inhibit the growth of micro-organisms. Today we use the term “antibacterial” to refer to antibiotics and other chemotherapeutic agents that are effective against bacteria and “antimicrobial” to broaden the spectrum to include protozoa, viruses, and other micro-organisms. Recent discussions about the dangers of the emergence of organisms that are becoming increasingly resistant to antimicrobial drugs may have made it seem that this is a new problem. It is not.

For nearly 40 years I have been associated, as author and editor, with the International Encyclopedia of Adverse Drug Reactions and Interactions, more commonly known by its colloquial title Meyler’s Side Effects of Drugs, the 16th edition of which has recently been published, and with its annual updates, the Side Effects of Drugs Annuals (SEDA). Over 30 years ago, in a chapter on adverse reactions to antibiotics in SEDA-9 (Elsevier, 1985), one of the contributing authors, Tore Midtvedt, wrote about the dangers:

“In order to avoid the further development and spread of resistant agents—a side effect more important than any other—we desperately need to attain (or revert to?) a more intelligent use—in clinical as well as industrial situations—of the antimicrobials available. The writing ‘you have been weighed in the balance and found wanting’ is already on the wall.”

As others have, Midtvedt repeatedly wrote about this problem. In SEDA-10, for example (1986): “We can hardly blame the microbes. The situation is created by our use—and misuse—of the antimicrobial agents available.”

Perhaps at last note is being taken.