Jeremy Cunctator’s Fabian tactics in his dealings with the British Medical Association over the junior hospital doctors’ contract have precipitated the first doctors’ strike for 40 years. After declining to negotiate, he belatedly agreed to do so, mediated by Acas. The negotiations failed. Did he intend them to? What do you think? Then on Monday 4 January we were told that the doctors would go on strike for 24 hours on Tuesday 12 January, with further strikes planned for 26 January and 10 February. I started to write my Friday blog. But two days later, on Wednesday 6 January, further negotiations at Acas were announced, to take place on Friday 8 January. I put the blog on hold. Instead, remembering a smooth politician and his exchange with Groucho Marx 65 years ago, I wrote about quacks, mountebanks, and charlatans, and the politician’s quack remedy, Hadacol. Groucho, where are you now?

Predictably, the negotiations failed again. The first strike has happened. Public sympathy for the doctors seems nevertheless to be holding. We can now expect more Fabian tactics—delays, as practised by the Cunctator, and intermittent skirmishes, as demonstrated by him and his colleagues, such as, strikingly, Sarah Wollaston, herself a doctor turned politician.

The Indo-European root STREIG had several meanings: to stroke or squeeze, to rub or press, a furrow or a groove. There’s hardly a word beginning str- that isn’t somehow related.

Strike itself comes via an Old French word estriquier and Old English strīcan; German has Streik, Danish strejke, Norwegian streik, and Swedish strejk. A strickle was an instrument for levelling (striking off) the top of a measure of grain or shaping the surface of a mould and a tool for sharpening scythes (Old English stricel). The French estriquier, to strike off, gave trique, a stick, like a strickle, for levelling grain, and then one with which to knit, tricoter. The tricoteuse Madame Defarge in A Tale of Two Cities knitted names into her register of those doomed to be executed. In English tricot is a knitted woollen or nylon fabric. A streak is an irregular stripe, a scratch, or a strain in the sense of a pervading character. A streak is also a flash of lightning, which can strike you dead. Streakers tend to strike like lightning, but they kill you with laughter instead. 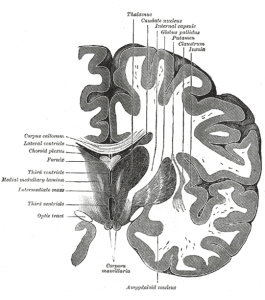 In Latin striga was a row of grain or a lengthwise furrow. Striga has survived unchanged in English and means a stria or a bristle, typically one closely pressed against others; strigate and strigose mean streaky or bristly. In Latin stria meant a furrow or the flute of a column, and in English it means a fine streak, furrow, or threadlike line, usually parallel to others, like the striae on striated muscle or on the abdomen of a pregnant woman. The corpus striatum in the brain (picture) consists of the caudate nucleus, the putamen, and the globus pallidus; the first two are together called the striatum, the last two the lentiform nucleus.

Image: The elements of the corpus
striatum, as illustrated in Gray’s Anatomy

Nasalize STREIG and you get the Latin word stringere, to draw tight or press together, like strangulation. A string is something that you stretch and strike to make a sonorous sound. Stringent means tight, binding, rigorous, and demanding close attention to detail; an astringent, such as witch hazel or rubbing alcohol, is something that contracts tissues. The past participle of stringere, strictum, gives us strict, abstrict (to release seeds by constricting the stalk), constrict, district (literally drawn apart), and restrict. In Italian stretto means contracted; in music it refers to part of a fugue in which subject and response are brought closely together. Latin distringere in Old French became destraindre, giving English distrain, to seize goods for debts such as non-payment of rent. Destraindre also led to destresse, whose English translation needs no stressing. To strand is to leave in distress. Praestringere in Latin meant to dazzle or blind and praestigium meant a delusion, giving prestige, which originally meant a conjuring trick or illusion, as in Christopher Priest’s novel The Prestige.

By the vowel-changing process called ablaut, a term that was coined by Jakob Grimm, STREIG becomes STROIG, giving us stroke. The nasalized version makes us strong.

When a baseball umpire calls “strike”, it means, paradoxically, that the batter has not struck. One can only hope that the junior doctors’ strike has the strength to strike home.