In 1998, The BMJ—which had previously been able to publish only one third of all letters received, and then only weeks or months after the articles to which they referred—took advantage of the advent of electronic publishing to publish pretty much everything immediately on the web, which they likened to a garden.

Letters were called rapid responses, and “all but the libellous, gratuitously rude, trivial, irrelevant, or incomprehensible” were posted on the website within 72 hours, linked to the article to which they referred. Correspondents were urged to “ponder which contribution is likely to be of more value to the scientific process—entering the hurlyburly of discussion while a topic is ‘hot’ or getting their words into print months after most people’s attention has moved on.”

Some of the material that appeared was hastily written, ill considered, off the wall, sometimes even vituperative. By 2002, 20 000 rapid responses later, the journal was publishing “just about anything that isn’t libellous or doesn’t breach confidentiality,” and considered that the advantages outweighed the disadvantages. But after 50 000 responses the “impression was that the overall quality of responses was falling.” In 2005, the journal therefore decided to return to the original criterion for publication: “that a response contributes substantially to the topic under discussion.”

I am not entirely sure that much has changed. The spectrum of responses is still wide. At the high end are carefully considering expositions from those who have spent lifetimes pondering their subject. In the middle, those who know something about the subject, or think they do, and may know as much as a little, offer more or less random reflections, some (but not all) of which may be thought provoking. At the low end there are still a few substandard efforts. The spectrum slides gradually and imperceptibly from rapid responses to rabid ones.

Grimm’s law predicts this. The brothers Grimm, Jakob Ludwig and Wilhelm Karl (picture), best known for the collection of fairy tales that bears their name, the first edition of which has recently been published in a modern translation, were also eminent philologists. Jakob’s work is commemorated in Grimm’s law, which governs the ways in which particular sets of consonantal phonemes change from one to another as languages develop, explaining certain Latin/English and Greek/English correspondences. The interchanging sets are:
the velars k, g, and h, explaining cardia/heart, genu/knee, and hostis/guest;
the dentals t, d, and th, explaining tres/three, duo/two, and thyroid/door;
the labials p, b, and f, explaining pes/foot, labia/lip, and fundamentum/bottom.
Not to mention rapid/rabid. 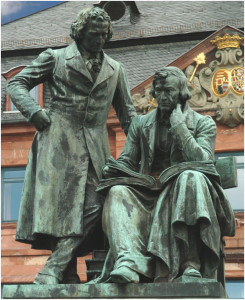 The Indo-European root LABH gave the Greeks λαμβάνειν (lambanein), “to seize” (future λήψομαι, lēpsomai, I shall seize), from which we get analeptic, cataleptic, epileptic, narcoleptic, and nympholeptic. A syllable is letters taken together. LABH, by another consonantal shift, became RABH, which gave the Greek word ἐρέπτομαι (ereptomai), “to feed,” related to ἐρέπτειν (ereptein, Latin eripere), “to pluck.” Erepsin was the name that Otto Cohnheim used in 1901, presumably surreptitiously, to describe a group of polypeptidases found in the small intestine. The name came from ereptomai plus pepsin.

Ravenous, ravish, and reverie (which originally meant delirium) also come from RABH, via yet another consonantal shift, this time Verner’s law, after a Danish philologist of that name. “Fireblood,” wrote Henry Fielding in Jonathan Wild (1743), “who was no backward Youth, began to take [Laetitia] by the Hand, and proceeded so warmly, that, to imitate his Actions with the Rapidity of our Narration, he in a few Minutes ravished this fair Creature, or at least would have ravished her, if she had not, by a timely Compliance, prevented him.”

So, when you respond, by all means make it rapid, but not rabid.