Five British/Irish cancer specialists were in Kathmandu lecturing on a course on implementing modern radiotherapy in Nepal. We had planned two workshops, one in Kathmandu on the 24/25 April and one in Bharatpur to the south on the 27/28 April. 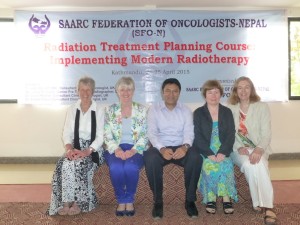 We were on the fifth floor of the Yellow Pagoda Hotel discussing radiotherapy for lung cancer at about noon on Saturday 25 April when suddenly the floor lurched and we were thrown to the ground with chairs falling. A second later the electricity failed. For what seemed an age but seemingly was only 40 seconds the walls and floor moved terrifyingly as we lay on the floor. I thought this was most likely to be my last birthday and was very irritated at the thought.

As soon as the tremor diminished we stood up and made our way down the stairs and out into the open space. The hotel was one of the more modern buildings in Kathmandu and despite appearances had been built to withstand earthquakes.

Surprisingly I still had mobile phone reception so I rang my husband in England. I said “ I have been in an earthquake and am ok.” His response was “Who is this?”—I had woken him, as it was 6.30am on a Saturday morning there. He later said that receiving this phone call was fantastic as although we did not know it at the time, the earthquake would dominate the news for the next few days and to know that we were safe was very reassuring. He was also able to communicate with all my colleagues’ families. 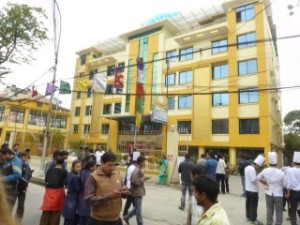 We realized that we needed to stay in an open area away from high buildings and electric pylons so we walked up to the main intersection between New Road and the Garden of Dreams. Here we joined hundreds of others—both locals and tourists, gathering around a forlorn policeman who had been directing the traffic. When the first aftershock came we found ourselves linking arms in a circle with others including a Spanish couple who had come to an international tatooing conference. Experiences like this link people together, sometimes literally, when ordinarily they would have nothing in common. 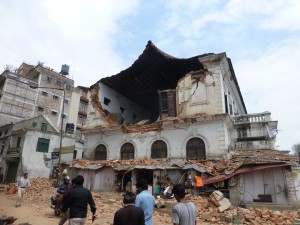 We decided to try to return to Kathmandu Guest House in Thamel but the first route was blocked by a fallen pylon and collapsed walls so we took a detour. Once there we remained there in the open for several hours until it was felt safe to go inside. At this point we were reunited with the fifth member of our group who had not been with us at the time of the quake. The KGH staff were marvelous and accommodated lots of people who had nowhere to go and provided free food, water and coca cola to all who were there. 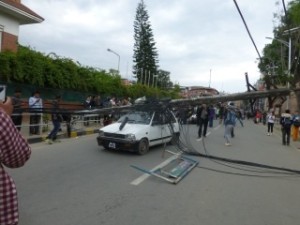 During that night when many people slept outside we at least had beds but still got up several times during the aftershocks. To feel a constant trembling of the ground was very unsettling.

The internet and TV were still working intermittently until early morning of 26 April so we could see the enormity of the event unfold. The following day when TV and internet failed was more frightening as we felt we were in an information vacuum.

On the Sunday morning we went to the BIR Hospital where our Nepali colleagues worked to offer assistance. Over 100 dead bodies and 250 injured had been brought into this hospital alone. However our oncological skills were not really what they needed so at this point we decided to try to leave Nepal as we could not be of any help—and water was already beginning to run out. 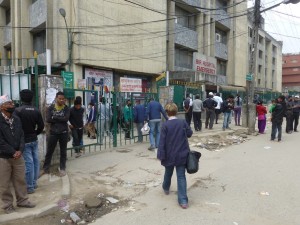 My husband and our local travel agent at home managed to book tickets for us and we left Nepal at 10am on Monday 27 April scarcely 48 hours after the earthquake on a flight to Heathrow via Muscat. We arrived home that evening, and have since watched events from the safety of our homes.

The feeling of uselessness is sometimes overwhelming so we are trying to assist fundraising for the Disasters Emergency Committee by publishing our story wherever we can. Please give whatever you can. This country, already one of the poorest in the world will take years to recover from this tragedy. We hope to return to continue our radiotherapy teaching in due course but recognize that progress in cancer treatment may have been halted for some time. 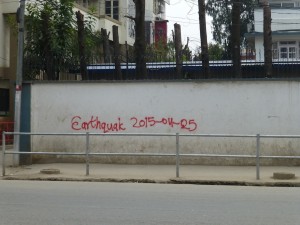