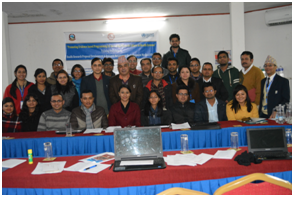 The Nepal Health Research Council was established in 1991 for the purpose of: regulating health research in Nepal (ensuring the ethical conduct of health research), generating and collating evidence for translation into policies and programs, and building the capacity of health research in the country. As part of one of our three major mandates we have been training people within and outside the health system in health system research, covering topics from writing research proposals; research management; data analysis and report writing; as well as scientific writing, including manuscript preparation.

Since we began this training program in 1991, we have trained 3601 health professionals until 2014. It’s worth generally equipping people interested in and motivated to do health research with the skills to do this (and we have been able to cater to the people in this group to a large extent). However, it’s particularly important to motivate medical doctors within the health system—be it the government’s health system or in private healthcare—to be involved in research and to provide more education about evidence based practice (EBP).

In Nepal doctors’ lack of engagement with research has long been an issue, and this has its root in the medical education of our country. Although we have strong medical curricula, medical students rarely develop an interest in subjects such as community medicine, biostatistics, and research methods in their undergraduate and postgraduate education. We have seen from our observations over the years that during training in research methodology, medical graduates have had a poorer introduction to the topic compared to public health graduates. This review of medical and health science curricula in Nepal found that the MBBS course spends just 1% of the total teaching hours on teaching research methodology, compared to as high as 22% in the bachelor of science in public health. In addition to this slight educational introduction to research, Nepal lacks a culture that encourages research among doctors. For many medical students, their focus is on gaining clinical expertise in order to graduate from medical school and perform well in clinical practice later on, so that they can begin to recoup the huge amount of money they’ve spent on private medical colleges.

For the medical officers in Nepal’s public healthcare delivery system, research is an important tool that supports the government in making the most of scarce resources by generating evidence particular to our health system’s setting. However, for several reasons (including those mentioned above), medical officers, especially those in the public sector, do not frequently engage in research and generating evidence. Consequently, to encourage medical officers to generate more evidence at the local level that could help decide what healthcare programs are needed, we planned a research capacity building project for them with the theme of “promoting evidence based programming,” and started a comprehensive training package exclusively for the newly recruited medical officers in our government’s health system.

The training package has been divided into three phases: the first phase comprises of proposal development and research management, taking up eight days; the second phase of data management and analysis that lasts 10 days; and the third phase of report writing and manuscript writing, which will last three days. The first phase of the training was carried out from 6 to 13 December 2015.

The end product of the first phase of training is a complete research proposal developed by the 25 participants and based on their own interests, as well as our health system’s priorities. We, the trainers, combined with the evaluation of the participants themselves, assessed the proposals and then selected the top five based on the competency of the participant, the feasibility of conducting the proposed research in other districts than the area proposed, the diversity of the five research proposals, the feasibility of carrying them out in terms of time and money, and the extent to which the research is a priority in Nepal’s health system. These five proposals will now receive a small grant to conduct the research in different areas. 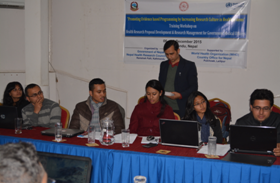 While five of the participants have been able to receive the grants as the top five researchers in the group, we have invited the remaining 20 participants to be a part of any of these five research projects based on their interest and working areas. Thus, the five researchers selected will have four additional members in their team. Each team has been assigned a mentor out of the trainers, who will guide them through the whole research process until the manuscript preparation. Once the grant is provided, the researchers will complete the fieldwork and come back again for the second phase of training: data management and analysis. Once their data analysis is completed, they will have their training in report and manuscript writing.

This kind of training, unlike other training, will give us some end results and we have already seen some benefits in the medical officers’ interest in and motivation to do research. We believe that training healthcare workers, especially medical doctors, in this manner will produce some good researchers in the healthcare systems of low and middle income countries, such as ours. Based on the final outcomes of the five research projects, we plan to do this kind of modular training every year for the healthcare workers in Nepal, with a plan of clearly defined outputs from the training.

We would like to acknowledge the World Health Organization country office for their support for this training.

Krishna Aryal is a research officer at the Nepal Health Research Council and helps provide training in health system research methodology. He is one of the trainers and mentors in this particular project.

Bijay Kumar Jha is a training officer at the Nepal Health Research Council and coordinates the capacity building activities at the council.

Khem B Karki is the executive chief at the Nepal Health Research Council. He is the lead trainer and one of the mentors of this particular project.