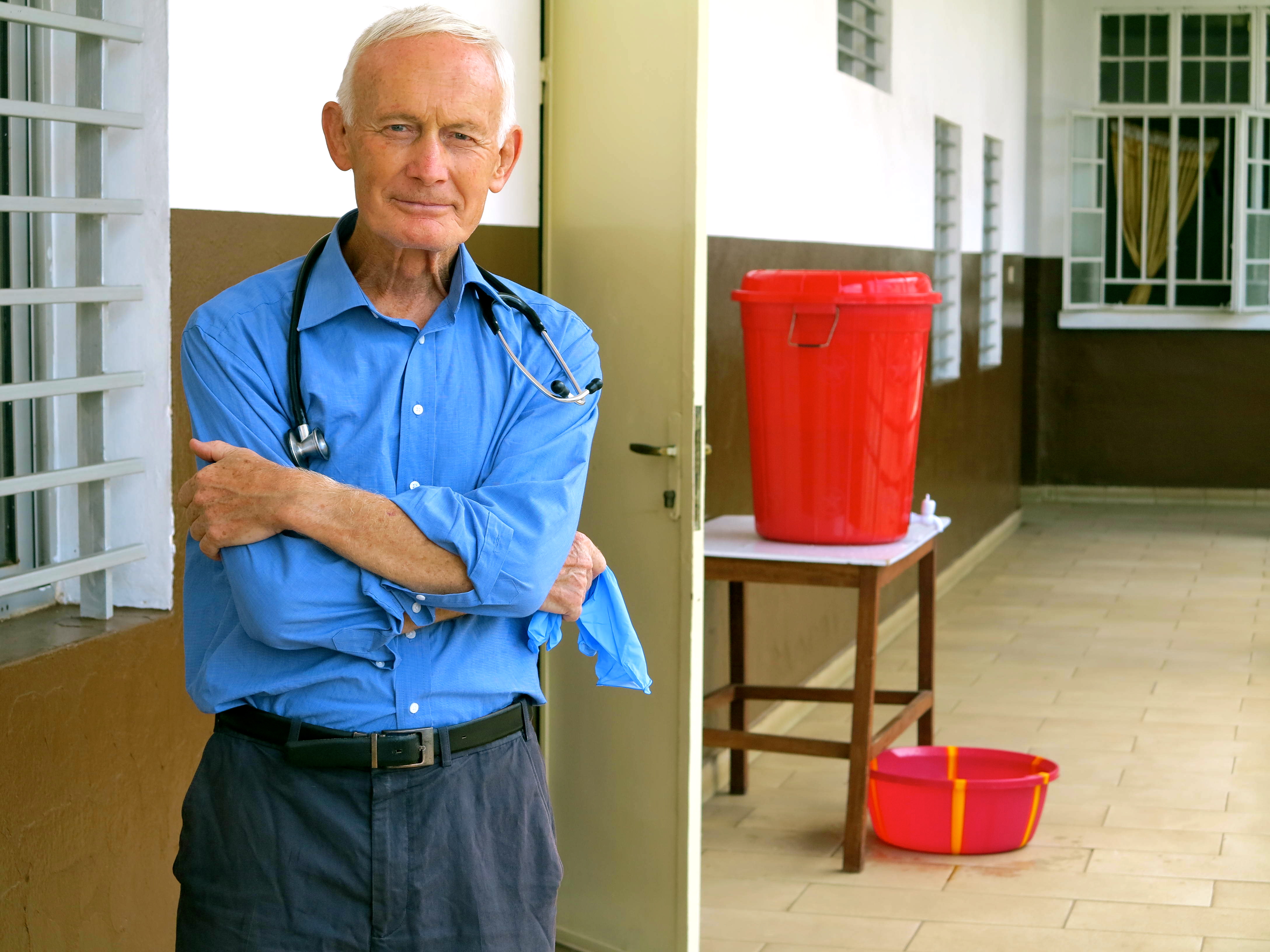 The King’s Sierra Leone Partnership (KSLP) aims to strengthen Sierra Leone’s health system by working with local partners to improve training, clinical services, policy, and research. Following on from Colin Brown’s (KSLP’s infectious diseases lead) blog post in November 2014, consultant physician Terence Gibson shares his experiences in Sierra Leone before, during, and after the Ebola outbreak and highlights the need for continued support in the post-Ebola response.

In March 2014 I left Guy’s and St Thomas’ NHS Foundation Trust where I had been a consultant physician and rheumatologist for 38 years. Quickly growing restless and hankering for new experiences, I departed for Sierra Leone with the KSLP as a volunteer consultant physician just three weeks after leaving my former post. I was aware of the emergence of Ebola in Guinea, but I had no serious misgivings about beginning work in a neighboring country.

On my second day at Connaught Hospital in Freetown, Sierra Leone, I was invited to take over a medical round and soon after I had established myself as one of the hospital’s four physicians. I was allocated two house officers and a group of medical students, similar to what I’d experienced in the UK. Where the parallels stopped, however, was that postgraduate training after house officer level does not exist in Sierra Leone. This meant that the house officers required close supervision, and when they weren’t present, there were no senior house officers or registrars to fill the gaps in personnel.

In June 2014 Ebola struck Freetown. What began as a few cases soon grew into an overwhelming surge. One day in August, one of my three consultant physician colleagues failed to show up for his duties. I attended to him at home but he died of Ebola some days later. Disturbingly, I knew how he had contracted the disease. We had both wrestled with the same patient in an effort to take blood. This was just one of the many close calls for me working in the medical assessment unit and on the medical wards where we were often unknowingly exposed to patients with the disease.

Several other doctors and nurses at Connaught died of the Ebola virus, causing widespread panic among hospital staff. House officers went on strike and some other remaining colleagues stopped visiting the wards. KSLP reacted quickly; for a while, Connaught was one of the only hospitals to have isolation units for suspected Ebola cases. Volunteers were recruited from the UK and elsewhere to help fight the epidemic. It was inspiring to see so many young doctors and nurses suspending their careers and putting their lives at risk.

My own role shifted to maintaining a medical service for patients without Ebola, keeping open a medical observation unit and four medical wards. For a two month period I was the only doctor attending those patients who had been admitted for reasons other than Ebola. However, despite triage and later a screening process, Ebola patients were inadvertently admitted to the observation and ward areas I was looking after. Discovering that a patient I had been treating without full protection was Ebola positive resulted in sleepless nights, but the experience soon became so regular that I stopped being anxious.

So we return to the future

On 7 November 2015 Sierra Leone reached 42 days without a case of Ebola virus disease and was declared “Ebola free.”

So we return to the future. Back to the problems of under resourcing, lack of doctor training, the absence of specialists, and a diminished number of doctors because of Ebola deaths and desertions. While the challenges the country still has to face are steep and numerous, I am confident that they will be met with a spirit of renaissance that has spread throughout the country and my hospital since the end of the outbreak.

It is with regret that I shall leave Connaught in January 2016. My experience of acute medicine allowed me to relieve suffering and save lives, share skills, and teach students and house officers who will later run this hospital. The combination of clinical care and teaching has provided immense professional satisfaction and I can depart knowing I’ve made a difference for many Sierra Leonean families.

A note to my successors

Sierra Leone may have been declared Ebola-free, but there is much work yet to be done. There is an opportunity for national and international doctors to create a legacy of a revitalised health service through improving clinical standards and developing postgraduate training. But the country needs expertise—established physicians with extensive and varied experience in medicine especially, but also trainers and laboratory and infectious disease specialists. My experience has shown what a rewarding experience this can be—let’s make sure an outbreak like the Ebola outbreak in 2014/2015 never strikes again.