The Latin word “terror,” from the hypothetical Indo-European root TER, implying trembling, meant “the fact or quality of inspiring terror” (Oxford Latin Dictionary) and a person or thing that causes terror. Territare meant to constrain by fear, to try to scare, or, as we would now say, to terrorize. From “terror” we get such words as terrible, deterrent, and perhaps turmoil. “Terrific” originally meant terrifying or terrible; it now means the opposite.

In Greek τέρας meant a monster, something that might make you tremble, like Cerberus, the Chimera, the Gorgons, the Hydra, the Sphinx (pictures below.) It also meant a monstrous birth and a marvel or an incredible statement. Teratology, originally defined in Edward Phillips’s dictionary The New World of English Words (1678 edition), as “a discourse of prodigies and wonders,” in the 19th century came to mean the study of human “monsters.” A teratoma is a tumour that, like some Greek monsters, contains tissues of different germ cell origins.

Metathesize TER, and you get TRE, giving other fearful words: the Greek τρέσας, a sort of fright and flight, and the Latin tremere, to quake for any reason and specifically to be fearful, giving tremble, tremor, and intrepid. “Tremendous” originally meant dreadful or horrible; it now means the opposite. Delirium tremens was first defined in 1813 by Dr Thomas Sutton as a form of delirium, not necessarily alcoholic, worsened by bleeding and improved by opium. Among tremulous flora and fauna are Tremandra plants, with their shaking anthers, and the gelatinous Tremella fungi; tremella-like nanocomposites have electrochemical uses. Treron pigeons get their name from τρήρων, tremulous and shy like a dove. And a vowel shift gives us tromometer (Greek τρόμος, trembling), an instrument that detects earthly tremors.

Terror has been used as a weapon since early times, by insurgents and governments alike, sometimes by one masquerading as the other. The tyrants of ancient Greece and Sicily, probably named after a Phrygian god, Μὴν Τύραννος, and nothing to do with terror, were benevolent rulers who encouraged democracy. But by the 5th century BC tyrants were despots who ruled by fear. Wherever they were, tyrannicide was encouraged, although later Aristotle warned, in his Politics, that tyranny and extreme democracy could be equally degrading.

The first terrorists to be so called emerged in the late 18th century. A group of Dominican monks founded a house in the rue St Jacques in Paris and became known as Jacobins. Then when the Breton Club, a left wing political debating society, founded in Versailles in 1789, moved to an old Jacobin convent in the rue St Honoré, it became known as the Jacobin Club. Its members instituted the Reign of Terror, and so became known as terroristes, and their activities terrorisme, coinages that first appeared in 1794, in François Noël (“Gracchus”) Babeuf’s newspaper le Tribune du peuple. And although there were already other verbs for what they did (atterrer, terrorifier), a new verb was coined—terroriser. First the terroristes terrorized the aristocrats; then, having seized power themselves, they terrorized other “enemies of the people”, which meant anybody they found despicable, including each other. Robespierre, for example, had Hébert, Danton, and Desmoulins guillotined and then, along with Saint-Just, Couthon, and others, was dealt with similarly by Barras. The Jacobins’ Red Terror, as it was known, was followed by a royalist counterversion, the White Terror.

By the middle of the 19th century “terrorist” gained a more general meaning: “a member of a clandestine or expatriate organization aiming to coerce an established government by acts of violence against it or its subjects” (Oxford English Dictionary). Modern subtypes include ecoterrorists, bioterrorists, and agroterrorists. Intellectual terrorists terrorize figuratively.

Commentating during a test match on 7 August 2006, the Australian cricketer Dean Jones, thinking he was off air, said of the South African player Hashim Amla, “the terrorist gets another wicket”. Jones later apologized, but surprisingly he missed the opportunity of using the excuse that in South Africa “terrorist” has been used jocularly to mean a tourist, typically referring to a Transvaaler in the Cape. A usage better avoided in these troubled times. 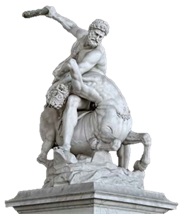 Like teratomas, terrifying Greek monsters were often composite: the Sphinx (left) had the body of a lion, an eagle’s wings, and the torso of a woman; the chimera (middle) had the head of a lion, the body of a goat, and the tail of a serpent; centaurs (right) had men’s torsos and horses’ bodies.