Every day family doctors face the struggle of being custodians of entitlement to food bank help and backstops for the failures of the welfare system, while at the same time wanting to do their best for their patients, which in extreme cases means getting them something to eat.

This same uncomfortable tension is played out in food banks across the country: how to respect and celebrate the humanity and hard work of food bank volunteers, yet at the same time say this is not a service we should expect to operate in one of the richest countries in the world, which, until now, had a tradition of safety net welfare provision.

Last month, the Fabian Society launched its “Hungry for change” report, the result of a year long commission, of which I was a member, looking at food and poverty in the United Kingdom, with all its implications for the economy, the welfare system, the environment, and the public’s health. This issue will run and run, as a follow-up report to Feeding Britain is expected from MP Frank Field and the All Party Parliamentary Group on Hunger and Food Poverty. The major conclusions that we arrived at challenge some of the accepted beliefs of leading politicians and economists. They highlight the precarious nature of our food supply and the prospect of rising prices and food shortages if nothing is done in both the food and welfare systems.

What were the major conclusions?

Food poverty is poverty. It won’t be solved by food banks or handouts of waste food,
which supermarkets have not been able to sell previously at inflated prices. Poor people face a poverty premium. If you can’t pay for your electricity by direct debit you pay more. If you can’t get in the car to the out of town supermarket you pay more for your food. For many, fast food takeaways represented a cheaper way to get calories—if the issue was feeding the family or feeding the meter, it’s hard to beat a bag of chips. The idea that electricity for a fridge would also be a cost, not a means to preserve leftovers for another day, was a shocking dose of reality. 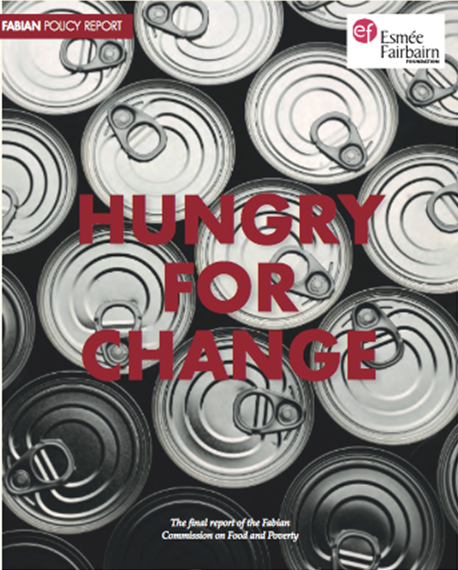 The exponential growth of reliance on food banks is just one manifestation of acute hunger. The much quoted “one million food bank clients” applies only to Trussell Trust food banks. There are many other food banks besides. And there are also many people who may be eligible for food bank help who will not go, perceiving it as a stigma too far. One in five parents in the UK has skipped meals, gone without food to feed their children, or relied on family members or friends for food.

In 2005 David Cameron spoke of how “We learnt from the Citizens Advice Bureau of a single mother who had to rely on a Salvation Army food parcel to survive. A Salvation Army food parcel, in this, the fourth richest country in the world, run by a Labour government.” Ten years later and in a Conservative government, food donations are even more heavily relied on, but we cannot allow charitable forms of food provision to become the norm.

One of the five main conclusions of the report was that food banks and charitable provision should be viewed as an unfortunate necessity of the present, which we should work to making unnecessary by 2020. Iain Duncan Smith’s proposal to offer job advice from within food banks is both a sinister effort to embed a voluntary service as the welfare state and a crass assessment of the problems of food bank clients. Many of the service’s users are in paid work and their problems are about in-work benefits and a result of the ruthless application of benefits sanctions.

Beyond acute hunger, there is modern malnutrition, which manifests principally in the form of obesity. Under the surface, this part of the iceberg may include 13-14 million people living on very low incomes and unable to afford a healthy diet. About a quarter of the UK’s population are obese, and over one third of adults may be pre-diabetic and at risk of full blown diabetes and a lifetime of chronic disease management. According to the Global Burden of Disease study, 36% of chronic disease is attributable to poor diet. Other manifestations of modern malnutrition can be found in “Victorian” rickets, vitamin D deficiency, and iron deficiency.

The food system is broken: it is reliant on squeezing costs out of primary producers, plunder and poisoning of the environment, and exploiting some of the lowest paid workers in the economy. Price rises will be inevitable at some point, if the chancellor’s national living wage is to be paid to food workers and if the necessary environmental protections are to be applied to agricultural land. While food riots may not be likely here, as they have been in the Arab spring and elsewhere in the world, food crime is massive and food theft is growing.

It’s fitting that the report used words like “rights” and “values” because food is a right. The availability of food, the preparation of food, and family eating have been devalued—food has been relegated to a commodity. We have lost the recognition of food by seasons, locally available produce, and any respect for the land. Soil management and protection of biodiversity do not feature highly on the health radar or in economic analysis. We are not exercising enough stewardship-husbandry in our food system and there will come a point when we will pay a high price.

Seasonality is not just a nostalgic loss: those of us writing the report learned from producers in Lincolnshire how big supermarkets contracts based on cost, quality, and availability meant that prices were maintained throughout the year—there was no cheap season for apples or broccoli. Suppliers were obliged to source cauliflowers from Spain and Turkey to keep the big four supermarkets supplied all year round. But the seasons were lost and so too were favourable prices for the consumer. Aldi and Lidl, which have been growing in recent years, set their contracts on cost and quality—they are stacking their expanding food shelves in their multiplying stores with more seasonable, cheaper fruit and veg.

In the report we made a number of specific, deliverable, and simple recommendations, particularly directed at the Cameron government. There should be a minister with specific responsibility for household food security. Food is a national emergency; we have ministers when needed for drought, winter, and the Olympics, so why not for food security? We need to agree on a national definition of household food insecurity so we can measure it—will it get worse or better? It’s just basic, essential surveillance of a major public health problem.

There needs to be a national food strategy, which is more than just how to export more British food. We should revisit the “Can Britain feed itself?” approach to sustainable food and farming for the country. We said it was short sighted and unwarranted for the government to cut public health grants, which affected many small local public health nutrition projects, and we recommended that the local authorities most affected by poverty should be a focus for a concerted, affordable food initiative.

Raising the status of food, food security, and food poverty in the UK would be visionary, but it is vital for the protection of the health, wellbeing, and social fabric of future generations; for the protection of environments and biodiversity; and for the effective use of the land for food. Health professions deal every day with the victims of welfare failure and a sick food system. We need to value healthy affordable food and expect our government to do the same.

John Middleton is honorary professor of public health at Wolverhampton University, formerly director of public health in Sandwell in the West Midlands of England, and immediate past vice president of the UK Faculty of Public Health. He is a member of the Fabian Society’s Commission on Food and Poverty and writes here in a personal capacity.

Competing interests: John Middleton declares a competing interest as a member of the Fabian Society’s Commission on Food and Poverty. His contributions spread over a year of the commission and included fact finding visits to community food projects and food sector interests in Glasgow, Lincolnshire, and Salford, and formal evidence hearings. The full evidence and recorded interviews are present on the Food and Poverty Commission website http://foodandpoverty.org.uk. He received no payment for this work. The project was funded by the Esmée Fairbairn Foundation and administered by the Fabian Society.