Seeking early medical words in the Old English dictionary known as the Epinal glossary, I was not surprised to find that one of the dozen examples I unearthed was onomatopoeic: iesca (yesk or yex, a sob, a hiccup, or the hiccups). Perhaps I should have been surprised that there weren’t more; after all, some early words in all languages must have been onomatopoeic, imitating local sounds, typically those of birds, like chickadee, cuckoo, owl, and peewit.

Preceded by the French form hoquet, “hiccup” was originally spelled hiquet, hicket, hickot, hickock, or even hitchcock (unrelated to the surname Hitchcock, which simply means “little Richard”). By the late 16th century “hiccup” was the established spelling, but because it was also known as a drunken man’s cough, in the 17th century it became “hiccough”, pronounced “hiccup.” In his dictionary Samuel Johnson incorrectly wrote that “hickup” was a corrupted form of “hiccough”. Yesk, or by metathesis yex, to sob or hiccup, belch or expectorate, came from the Latin oscitare, to gape, but may also have been imitative of the sound of hiccups. In The Canterbury Tales, Chaucer’s miller tells a scurrilous tale about a carpenter. In revenge, the reeve, a carpenter himself, tells a tale about a drunken miller, who yexes and speaks through his nose; or, as Neville Coghill’s version has it, “hiccupping through his nose he talked and trolled/As if he’d asthma or a heavy cold.”

Around 700 words are described in the Oxford English Dictionary as being etymologically echoic, imitative, or onomatopoeic. Those starting with the letters b, f, g, j, t, and w are over-represented (60% compared with 23% of the complete lexicon). Examples include buzz, fizz, glug, jabber, tick-tock, and whinny, like Gulliver’s houyhnhnms. In many cases the second letter is an l or an r (16% and 8% of the total respectively), also over-represented.

Flush is a good example. The initial letters suggest flying and fluttering, and the ending suggests the sound that results. Flush originally meant to fly up quickly and suddenly, wings aflutter. It then came to mean to drive birds out in order to make them flush, and thus more generally to reveal something or bring it into the open. Flying, fluttering, fluidity, fluctuation, flatus, the bloody flux, and flushing are all connected with flow (Latin fluxus). We hear the flush when we flush a toilet, and the rush of blood to face and neck, called a hot flush in the UK and a hot flash in the USA, is also onomatopoeic, even though we can’t hear it.

The earliest recorded instance of “flush” is in Paradise Lost (1667) when Milton describes Eve’s embarrassment on telling Adam that she has eaten the fruit: “In her Cheek distemper flushing glowd”; Adam responds by turning pale at the thought of the punishment to come. But flashes antedate flushes. Here is Spenser describing the maiden modesty of Britomart in The Faerie Queene (1590): “Ever and anon the rosy red, Flashed through her face . . . ” (picture). 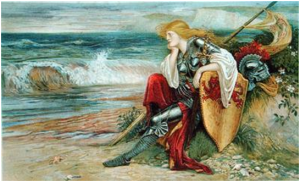 Britomart in The Faerie Queen, as depicted by Walter Crane (1900); in the poem she represents Queen Elizabeth I

Onomatopoeia occurs in other parts of the body too. Galloping is probably something to do with leaping and loping, but it may also have been influenced by the sound of horses’ hooves. If you hear the heart sounds going lub-dub-up, the “up” is a third heart sound; if up-lub-dub it’s a fourth heart sound. The former sounds like a horse cantering, but both are called gallop rhythms. And onomatopoeic murmurs may accompany them.

Further down still, borborygmi, low pitched intestinal rumblings, come from the Greek word βόρβορος (borboros), meaning mud; βορβορόθῡμος meant dirty minded and βορβορόπη lewd. The word does sound like something rumbling, but perhaps it also related to muddy bowel contents. You usually hear borborygmi in the abdomen, and in the right iliac fossa they suggest appendicitis. Inspirational borborygmi in the chest have been reported in cases of para-oesophageal hernia.

To gag is to strangle or suffocate, imitating the sound made in choking. Hence, the gag reflex. By transference, a gag is something used to stop up the mouth or to keep the jaws open during surgery. Gagging for air is choking, but, in case you thought we’d worked back up the body again, gagging for it is being desperate for something altogether different.