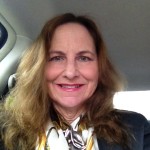 Recently on Twitter I saw a beautiful network graph with my name in it showcasing the reach of a doctor on Twitter. It was amazing to see the reach of just a few small words. I asked the scientist, Wasim Ahmed if he would consider creating a network graph for the key word “BMJ.” These maps lead to the NodeXL web site where you can explore them for further analytics such as top URLs, keywords, and hashtags (#). [1] 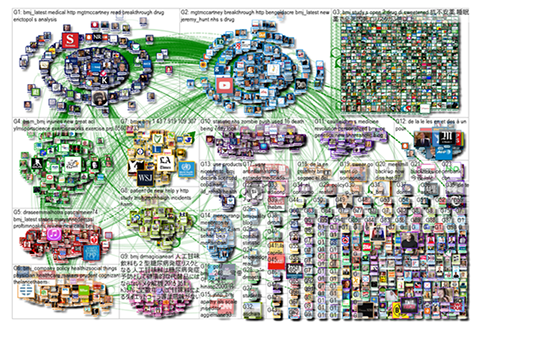 One simple tool that is freely available to anyone with an internet connection is Twitter. This application is fast evolving into an information resource that is used to share health information, track disease outbreaks [2], adverse events in research and even to map civil unrest [3]. The BMJ is a rich source of information via Twitter where anyone interested can find the best research papers by joining The BMJ Twitter feed. Publishers, Researchers, Patients and Clinicians can share information and experience for better health care. It is easy to join in on a “Twitter Chats” where anyone can participate and where real health issues are discussed. There are medical journal clubs [4], support groups [5], meeting on ethics, research, mental health and even conferences [6] live tweeted daily.

Sir Muir Gray shares “Knowledge is the enemy of disease, the application of what we know will have a bigger impact than any drug or technology likely to be introduced in the next decade.” [7]

Wasim Ahmed also created a network graph on the patient involvement keyword at The BMJ. The influencers are not always who we think they are but we can all have a voice. The BMJ now has over 300 patient reviewers. Volunteers can broaden the scope for the values, priorities and experiences of patients so they are heard clearly and with accuracy. With Twitter changing the world can take place by sharing useful health information one tweet at a time. 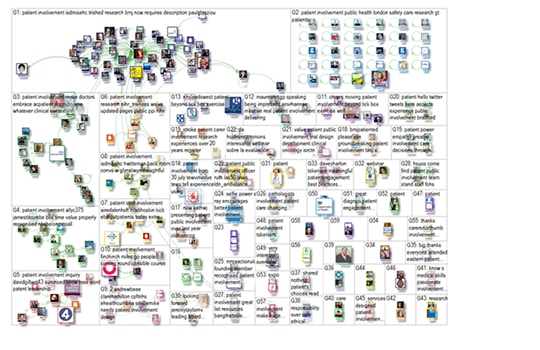 Twitter is like a new world where the funny, famous, admired and just plain weird are only a tweet away. I found people discussing science and sharing references and new ideas about what they found. They are from all continents and cultures discussing more divergent views than would ever be allowed at the most liberal gatherings. On Twitter you are free to lurk or engage with no commitment needed. You can meet amazing patients and courageous advocates who share their struggles and triumphs one tweet at a time.

Recently I wrote a blog post on Patient Reviewers for the BMJ with the unstoppable Marilyn Mann. I met her when she responded to a Twitter post on how to include citizen authors in an academic publication. Tools like Twitter could give us one more tool grow the footprint better word health. Health Science and Public health are in the war zone [8] let us as citizens also use social media to do more good than harm [9] and to empower and equip others with evidence based health awareness.

Amy Price is developing PLOT-IT (Public led online trials—infrastructure and tools as her doctoral project in evidence based healthcare at the University of Oxford. She is a Neurocognitive rehabilitation consultant and a director of ThinkWell. Her goal is to build bridges between science, healthcare, and the public. She is a patient reviewer. Follow her on Twitter @AmyPricePhD