Back-formation , forming words by shortening other words, should not be confused with backslang, the formation of words, not by breaking them up, but simply by reversing them.

A yob is a [backward] unruly boy. Naff, as in “naff off”, may be from fanny, the back or front version, but could just be a variant of eff [off]. Similarly, nock, now obsolete, may be backslang for con (also back or front); when her maid translated the French word “la robe”, as “cown”, it shocked the French princess Catherine in Henry V (3.4), as a word “non pour les dames d’honneur d’user”; this is not far removed from Hamlet’s “country matters”. Other backslangs have not survived. They include slops, a contracted form of ecilop (police), and ynnep or yannep (a penny), which should not be confused with pennif, which is backslang for finnip, a five-pound note (from the Yiddish pronunciation of the German word fünf).

In Samuel Butler’s Victorian satire Erewhon (1872), the narrator is entertained in the eponymous retrolectional fictional utopia, which borders Erewhemos, by Senoj Nosnibor and his daughter Yram. Decoding is hardly necessary. Similarly, Llareggub is the name that Dylan Thomas gave to the fictional village in his play for radio, Under Milk Wood (1954); the name looks convincingly Welsh to the untrained eye, until you read it backwards.

Cruciverbalists like to use pseudonyms, and one way to create them is by reversal. “Leon” for instance, was the pseudonym of Noel Anthony Longmore, “Llig” is Jack Gill, “Smada” Arthur Adams. The lexicographer Jonathan Crowther, who recently celebrated his 2250th weekly puzzle as “Azed” in the Observer, chose the name by reversing the Spanish inquisitor Don Diega de Deza, in homage to his predecessors, Torquemada (the translator, poet, and Persist, Edward Powys Mathers) and Ximenes (the schoolmaster Derrick Somerset Macnutt), who elsewhere also styled himself Tesremos.

Speaking words backwards as a secret language is uncommon, but some young children do it, as do some adults. Two children who had this ability at ages 8 and 9 had retained it five years later. The ultimate form of this is backwards speaking phonetically, which reaches its apogee in the phenomenon of phonetic palindromes.

In 1973 the epidemiologist Alvin Feinstein pointed out a problem that he pereceived with the terms “prospective” and “retrospective”, suggesting the two terms should be used to describe the direction of the conclusion, from cause to effect or vice versa, and that confusion arose when the terms were used in reference to data collection. He proposed the terms “prolective” and “retrolective” to describe the directions in which data are collected, forwards or backwards in time. And if a cohort study involves following the data backwards in time from cause to effect, then a trohoc study, he suggested, would do it from effect to cause. Some have used this terminology, but it hasn’t generally caught on.

If you want to treat an ailment that has failed to respond to other medications, such as symptoms of the menopause, you might try an obecalp. The term is said to have been coined by Michael Axtens in a letter to the New Scientist in August 1998, and there is even a colourful formulation of an inert powder that bears the name “Obecalp,” which can be used for such purposes. Now you may think that this is something of an obecon, which struck me as a potentially good retrolectional name for a quasi-medication. I was therefore surprised when I discovered that a herbal formulation with this name actually exists and is marketed in some countries as a treatment for obesity. 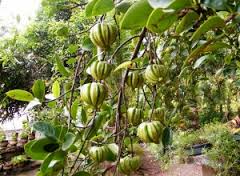 It contains Garcinia gambogia, Commiphora mukul, Trigonella foenum graecum, and Piper nigrum. I would be surprised if this concoction is effective. On the other hand, Garcinia gambogia (picture), one of the Clusiaceae, also found in products such as Exilis and Hydroxycut, about which the FDA has issued a warning, is reportedly hepatotoxic. Or rather it may tor your revil.