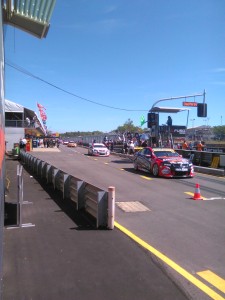 The spectacle and ceremony of the V8’s came to Darwin recently. Personalised saloon cars, a little like my grandfather used to drive, have been rebuilt and given a mechanical boost to reach speeds of 300kph. They are the showpiece of a touring racecar event that visits a number of racetracks around Australia every year.

Preened racing drivers put up with a lot, including camera crews, pit girls, and the odd race, which can last up to several hours in temperatures reaching 34°C. With a grumbling engine in front, the cabin can top temperatures of 55°C, leading to rapid hyperthermia and significant morbidity, if not controlled. A new focus on heat management has been developed in an array of sports over the last 10 years, looking at the effects of raised temperatures on body physiology, sporting performance, and long term morbidity/mortality of the athlete. These advances, used so well in professional sports like cycling or athletics, are now increasingly incorporated into motor sport. 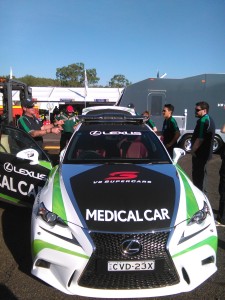 Dr Matt Brearley, based in Darwin with the National Critical Care and Trauma Response Centre, is a specialist on heat management. The aims of his research are progressing insights into the physiological effects of high temperature environments on top athletes and effective methods of cooling, as it has been shown that high core temperatures can cause rapid fatigue and slowed motor responses, severely impeding performance.

Heat dissolution relies predominantly on peripheral vasodilatation and sweating using latent heat of vaporisation to cool the body. The combination of 3 layer protective clothing in motorsport, which inhibits evaporative heat exchange, and high cabin temperatures, creates conditions in which heat storage is inevitable.  It is thought that core temperatures exceeding 40°C can lead to significant heat exhaustion.

The key to heat management is active cooling. External devices are the most commonly utilised—the V8’s use cool suits, now an essential part of the cars’ internal mechanisms. Two areas of interest are slowing the rise to peak core temperature and rapid cooling either intra or post event. A paper from 2010 indicated subjects consistently fatigued at the same core temperature, from differing initial temperatures.  Lengthening the time taken to reach this fatigue point by pre-cooling has been thus shown to significantly improve endurance capacity and athletic performance.

For pre-cooling and post-event recovery, cool water immersion (utilising the thorax and abdomen for maximal surface area contact) and the use of ice slurries (slushies) are now deemed effective methods. For slushies, the change from solid ice to liquid water requires a significantly larger transfer of heat energy into the system, compared to cool water, and forms an internalised method of lowering core temperature (4-5ml/kg of crushed ice produces a lower core temperature compared to 0.75-1L of cool fluid).

These advances are essential in keeping athletes fit and safe from the risks of adverse heat accumulation, allowing V8 drivers to strive for coolness on, as well as off the track.