Violet Elizabeth’s “croth-word puthle,” composed for William to solve in Richmal Crompton’s William—In Trouble (picture further below), contains two three lettered words crossing at the centre letters. The first clue is “Wot you hav dropps of” and the answer, of course, is “COF.” Violet Elizabeth can’t have been the only child to have been troubled by the spelling of words that end in -ough, and one suspects that not a few foreigners have been puzzled too.

The allograph (grapheme variant) <gh> is one of seven that can represent the phoneme /f/, the others being <f> and <F>, <ff> and <Ff>, <ph> and <Ph>. But the pronunciation of <gh> depends on its origin. In some loan words, Ghon tubercles (Czech) and Malpighian corpuscles (Italian) for instance, it is pronounced like a hard g. And in the name of the town Keighley it is pronounced th. But most of the time it isn’t pronounced at all.

To understand <gh> we have to start with the velar fricative phoneme represented by the grapheme <x>, which is pronounced like the ch in loch. In Middle English it was represented by the letter h (hwaet!), but this was later replaced by ch. This form persists, for example, in Scots words such as bricht and sicht, and we see it in the name of the Swedish bacteriologist Örjan Ouchterlony, who invented the agar gel double immunodiffusion technique for identifying antibodies and antigens, such as immunoglobulins. In English the ch became gh, and the sound disappeared, especially after the vowel sounds i (Bright’s disease), ai (straight), ei (overweight), au (daughter), and ou (see below). In the M’Naghten Rule the gh is also silent, but the more usual spelling of the name would be McNaughten, which means son of Neachdainn, an old Celtic name.

The pronunciation of -ough is highly varied. First, there are seven standard British English pronunciations, in five of which the gh is silent:
Aw, as in bought, brought, and fought.
Oh, as in dough, furlough, and though.
Oo, as in brougham and through.
Aow, as in bough, drought, and plough.
Uh, as in borough and thorough.
Off, as in cough and trough.
Uff, as in enough, rough, and tough.

Some of these can be pronounced in more than one way. Slough (sluff) is dead tissue in a wound, slough (sloh or slaow) is a marsh, and Slough (slaow) is the English town on which John Betjeman wanted friendly bombs to fall.

Then there are two Scots and Irish pronunciations: Ohh as in loch (for example, hough, lough, and ough) and Oohh, as in sough and through-stane.

Finally, there are rare words in which -ough is an alternative spelling: Ug, as in oughly (= ugly, used by Milton in Comus); Og, as in shough (= shock); and Ok, as in hough (= hock). The -og and -ok pronunciations arise because the English have difficulty in pronouncing “ohh.” For example, for Bach they say “Bahk” or “Bark”, although they may just be deriding Dr Edward Bach’s flower essences, which disappointingly lack efficacy.

That makes 12 pronunciations in all, and there is a thirteenth: up, which comes from a misspelling—hiccough—even though a hiccup is no kind of cough. 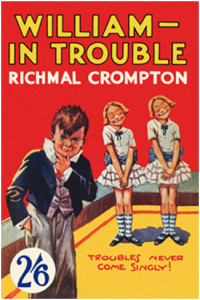 What was in Violet Elizabeth’s cough drops? The William books first appeared in the 1920s, and we can find out what contemporary cough drops contained by consulting the BMA’s publication Secret Remedies (1909). Reichel’s Cough Drops, for instance, smelled and tasted of arnica, pimpinella, and anise. Dr Lauser’s Cough Drops, a liquid formulation, contained, not what it said on the bottle, but liquorice, senna, aniseed, and ammonium chloride. Beecham’s Cough Pills had similar contents plus a small amount of morphine, and Keating’s Cough Lozenges contained morphine, liquorice, and ipecacuanha. Ough!

And the other clue in Violet Elizabeth’s puzzle? “The oppossit of cat.” No prizes.