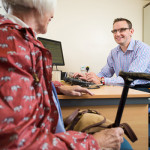 • Being a GP is still the best job in the world, writes Margaret McCartney, despite the many problems facing the profession. She notes that GPs witness the life stories of people and their families unfolding in real time, and she finishes with a call to arms for those who are considering general practice:

“Low morale and bad press are putting some young doctors off general practice, and understaffing is probably why six in 10 older doctors are considering early retirement, why 17% of Scottish GP practices report at least one vacancy, and why one in eight GP training places in England goes unfilled . . . So, to young doctors, medical students, and teenagers hesitating over university applications: come on in, bring your enthusiasm and vocation, and help us get back the job we love.”

• Two of today’s research news stories concern diabetes. The first details a study published in the British Journal of General Practice, which showed that a simple patient education and review programme reduced inappropriate self monitoring of blood glucose in patients with type 2 diabetes who are not treated with insulin. The researchers argue that, if replicated nationally, the programme could avoid unnecessary testing in 340 000 people and could save prescribing costs totalling £21.8m.

• The second story looks at the use of the sulfonylurea drug glyburide to treat gestational diabetes and the effects it can have on newborns. A study published in JAMA Pediatrics found that “glyburide was associated with a higher risk for newborns to be admitted to a neonatal intensive care unit, to have respiratory distress, hypoglycaemia, or birth injury, or to be large for their gestational age when compared with infants born to women treated with insulin.”

The study authors conclude, “Given the widespread use of glyburide, further investigation of these differences in pregnancy outcomes is a public health priority.” But an accompanying commentary advises caution, saying that “the results may be affected by important confounding factors. While the authors have adjusted for important medical conditions, they have not adjusted for all relevant socio-demographic features.”

• Finally, in “Future proofing the NHS,” Nigel Hawkes discusses several possible healthcare models that have been piloted or proposed. Looking ahead to May’s general election, he considers the stance of the two main parties and some of the contradictions lurking in their current favoured approach.

For more from The BMJ on the UK general election go to bmj.co/election.